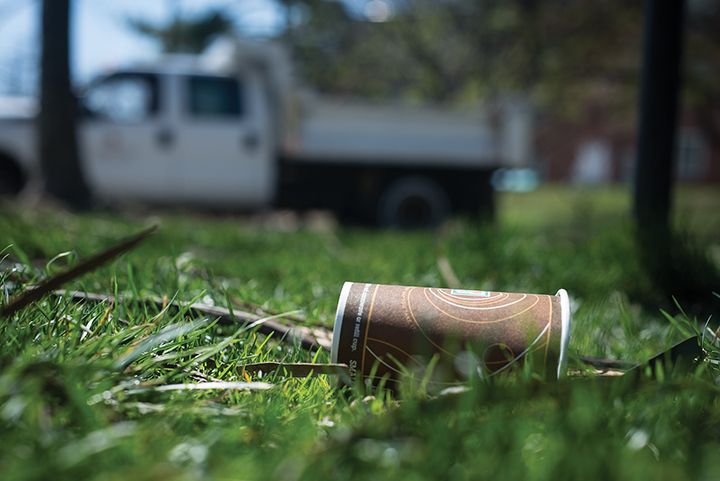 When it rains in Montgomery County and parts of Baltimore City, some of the precipitation is absorbed into the ground before running into the Chesapeake Bay.

But much of the water flows over impermeable surfaces like paved streets and sidewalks, where it picks up harmful nitrogen and phosphorus-based pollutants before emptying into storm sewers or ditches — and eventually into the bay.

Too much of these nutrients in a waterway can make algae bloom faster than the ecosystem can handle, decreasing the amount of oxygen available in the water and causing fish to die. These algae blooms also produce toxins that can harm people who come in contact with the water, according to the Environmental Protection Agency.

Now, a multi-disciplinary team of researchers from the University of Maryland is working to examine how the presence of urban green space, such as parks and grass fields, affects stormwater management and water quality in these areas — two major watersheds in Washington, D.C., and Baltimore.

“It’s really important to learn how human and natural processes interact,” said Paul Leisnham, an environmental science and technology professor involved in the research. “We live in an interconnected world. We’re human and impact natural systems and vice-versa, and so there’s a lot of rich research in trying to understand general principles and how humans interact with their environment and how their environment affects humans.”

The researchers hail from a number of backgrounds — including ecology, landscape architecture, environmental justice and bioengineering — and plan to use the diversity of their team to their advantage.

To do so, they will approach the issue from four angles: studying disparity in stormwater management practices in areas of varying socioeconomic statuses, identifying the implications of poorly-managed green space, developing a tool to locate high-pollution areas, and spreading the use of the most effective stormwater management strategies.

Victoria Chanse, a plant science and landscape architecture professor, is responsible for the first objective, as well as investigating why some communities don’t use stormwater management practices found to be the most effective, such as having residents remove pavement on their property and installing devices that prevent harmful runoff, like rain barrels and gardens or roofs covered with vegetation.

One reason an area might not implement these best practices is because they simply don’t know about them, Chanse said. In addition, there might not be programs in place that incentivize homeowners to carry out these strategies on their properties.

Neighborhoods that sit on the lower end of the socioeconomic scale are often characterized by vacant lots and buildings with residual pavement, Leisnham said.

“All the pavement can negatively affect stormwater,” he said. “All these abandoned lots and vacant buildings can mean a lot of overgrown vegetation — that the green spaces aren’t managed.”

This could mean more polluted runoff in these areas and cause residents to associate green spaces with trash, pests and crime, Leisnham said.

“All of these things are real risks, and they have negative implications and are experienced to a greater extent [disproportionately] to low income or low socioeconomic communities,” he said.

Leisnham is examining how mosquitoes thrive in mismanaged urban areas, which can negatively affect how residents take care of their backyards and view green spaces.

The prevalence of mosquitoes in these areas is linked to how much stormwater is present, because mosquitoes lay their eggs in stagnant water, he said. In previous research, when Leisnham removed trash and implemented stormwater management practices such as planting more vegetation in mismanaged green spaces, he said he witnessed a decline in the mosquito population.

In addition to Leisnham and Chanse’s research, Hubert Montas, a bioengineering professor, is working to identify hot spots of nutrient pollution in the two watersheds by using geographic information system mapping technology within a water cycle model to predict where these areas will be.

“I think it will help because people can’t see the nitrogen and the phosphorus in water and recognize it as a problem,” Beckley said. “They just see the trash.”

Finally, Amanda Rockler, a watershed restoration specialist who works in the agriculture and natural resources college, is working with local environmental programs to implement effective stormwater management strategies and “translate science into the community.”

She hopes involving groups such as the Anacostia Watershed Society and Maryland Sea Grant will encourage residents to adopt stormwater management practices in their own backyards.

“They are sort of the [liaison] to the community, if you will. They are the best people to get some of these messages out to the community that they work with,” Rockler said.