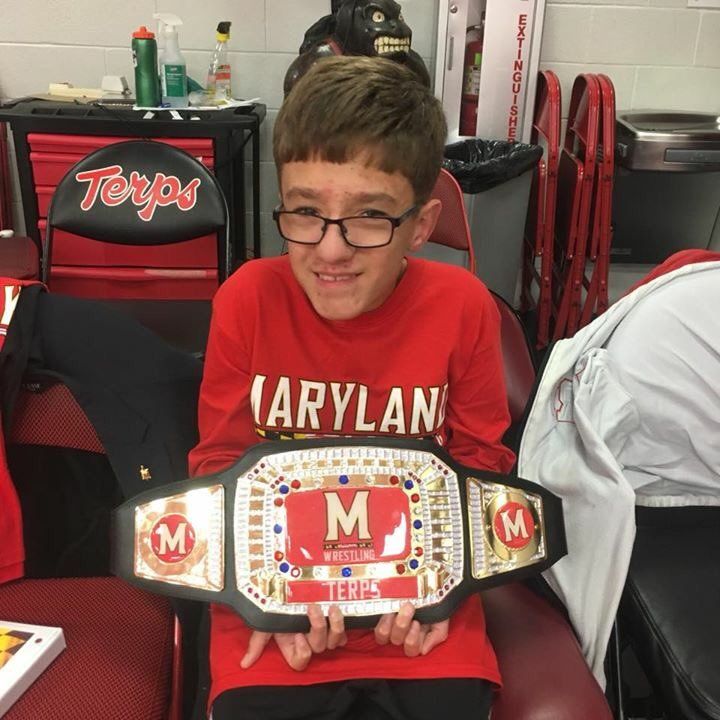 With a clipboard in hand, Ryan Cole has been a staple on the Maryland wrestling team’s bench since 2017, soaking in the action while taking notes on each match.

Ryan, a 13-year old from Kensington, is on the Terps’ sideline for every home dual meet with a big smile on his face. He’s joined the Terps on bus trips to nearby away meets twice, often chatting with the wrestlers during matches, enamored with the entire matchday process.

But when Ryan was born, there was no guarantee he would be where he is now — fully immersed in Maryland wrestling’s culture.

On Feb. 21, 2005, Eric and Andrea Cole traveled to their doctor to find out whether they would have a boy or girl. They learned they were having a boy. But the doctor informed them of something much more serious: their son had a congenital brain malformation called Dandy-Walker Syndrome.

After learning that a piece of their son’s brain was missing, the Coles suffered a few sleepless nights before a referral to Children’s National Hospital in Washington, D.C. On May 5, Andrea Cole’s amniotic sac ruptured, requiring an emergency cesarean section.

Ryan was born prematurely that night at just 1 pound, 15 ounces. A future on the Terps’ bench could not have been further from Ryan’s parents’ minds.

“I remember Ryan being lifted out from Andrea and not making a sound,” Eric Cole said, fighting back tears. “Being automatically handed off to a bunch of nurses and doctors … he’s got IV’s in every limb, and they’re trying with all their might to help him out.”

Ryan spent 156 days in the neonatal intensive care unit after his premature birth. When he was finally able to go home, he did so with a feeding tube, which he needed until he was 3 years old. He’s had a total of six surgeries, including three brain operations.

Growing up, Ryan wasn’t allowed to play physical sports, but that didn’t stop him from enjoying them. Whether it was swimming, horseback riding or cheering on his beloved Washington Nationals, Ryan has always stayed close to athletics.

“With [Team IMPACT], you don’t specify a program or even a school,” Eric Cole said. “We sent the application in, and we got a phone call where they said, ‘Well, we have a potential match with the Maryland wrestling team, how would you feel about that?’ And we said, ‘That’d be outstanding!’”

Both Eric and Andrea Cole attended Maryland. Eric graduated in 1996 and earned his master’s degree in 2006 while Andrea finished her undergraduate degree in 1995 and completed her master’s in 2003.

So, while the Cole family has deep ties to the university, they admitted they weren’t wrestling experts before Ryan was matched with the team.

“We weren’t really familiar with [wrestling] at all,” Eric said. “The whole family’s gotten to learn a lot. The guys have been great about teaching us the intricacies of the sport, and we’ve really embraced it.”

Even with the Coles’ limited knowledge of the sport, the team fully embraced and welcomed them with open arms.

Eric wasn’t quite sure how Ryan and the wrestlers’ relationships would pan out, but it’s surpassed everything he could’ve imagined. Ryan not only gets to attend every match but gets to sit on the bench, fist bump all the wrestlers and joined the team on road trips to Navy last season and George Mason this year.

“They truly include him,” Eric said. “They just want to make sure that he’s having a good time.”

Ryan’s upbeat attitude and infectious smile has made a huge impact on the team. He’s one of the most enthusiastic fans, cheering no matter if his teammates are winning or losing — a trait Maryland coach Kerry McCoy values.

“Ryan is awesome,” McCoy said. “He doesn’t get upset if one of the guys loses, and he doesn’t get overly excited if someone wins. He just loves being a part of the program.”

165-pounder Brendan Burnham agreed, saying that Ryan’s integration into the program has helped buoy the Terps as much as they bring a smile to Ryan’s face.

“He’s a great example of someone that’s facing a lot of adversity in his life, and he’s able to overcome and look at the positives,” Burnham said. “Him being so positive around our team is such an uplifting thing for all of us.”

Wrestling is a sport with ample action, whether it be takedowns, throws and even the occasional blood spatter. But Ryan has his own favorite parts of the matches.

197-pounder DB Whisler is one of Ryan’s favorite wrestlers on the team, and Whisler loves Ryan’s obscure predilections.

“Ryan loves the referees,” Whisler said with a laugh. “He always sits in [the wrestling room] before the matches, and when the referee’s come in, he asks them a bunch of questions. It’s great.”

Wrestling referees are usually maligned because of the nature of their jobs: judging the competitions and assigning points based on certain moves, stalls or pins.

But not if you ask Ryan.

“I don’t know why [I like them so much],” Ryan said with his patented big smile. “I just really like them.”

Since joining the team, Ryan has become increasingly knowledgeable about the sport he once knew little about.

To be like one of the referees, Ryan has mastered the ability to score matches from his seat on the Maryland bench, continually scribbling on his notepad.

“[The wrestlers] really taught him a lot of the nuances of the sport to the point where he can actually score a match,” Eric said. “It’s a way for him to participate in a meaningful way.”

Whisler has gravitated toward Ryan ever since Ryan signed with the team in 2017, and that relationship has only grown stronger.

Ryan’s story has put wrestling into perspective, not just for Whisler — a junior who opened this year as a starter but has been sidelined with injuries for all but his first meet — but for the entire team.

“If he can get through the things that he does, it makes wrestling seem way easier,” Whisler said. “There’s bigger battles than just going through a hard practice. For [the Cole family] to come out to our matches and be as happy as they are, it says a lot about the kind of people that they are.”

While Maryland wrestling and Team IMPACT have helped Ryan forge new lifelong friendships, they’ve also allowed him to finally live out his dream of being an athlete — something he’s always loved but has never been able to pursue himself.

“Ryan doesn’t always have the same ability [as] his peers to get out there and participate,” Eric said. “Even if he’s not out there on the mat, it’s a way for him to contribute.”

Injuries and lack of depth have severely hurt the Terps this season. But even in a season where little has gone right, the wrestlers know that Ryan will cheer them on no matter what.

So, as Ryan scores bouts on his notepad and has fun with his wrestling teammates, his parents are eternally grateful that their son is a Terp, considering all he went through to get here.

But no one is as appreciative as Ryan himself.