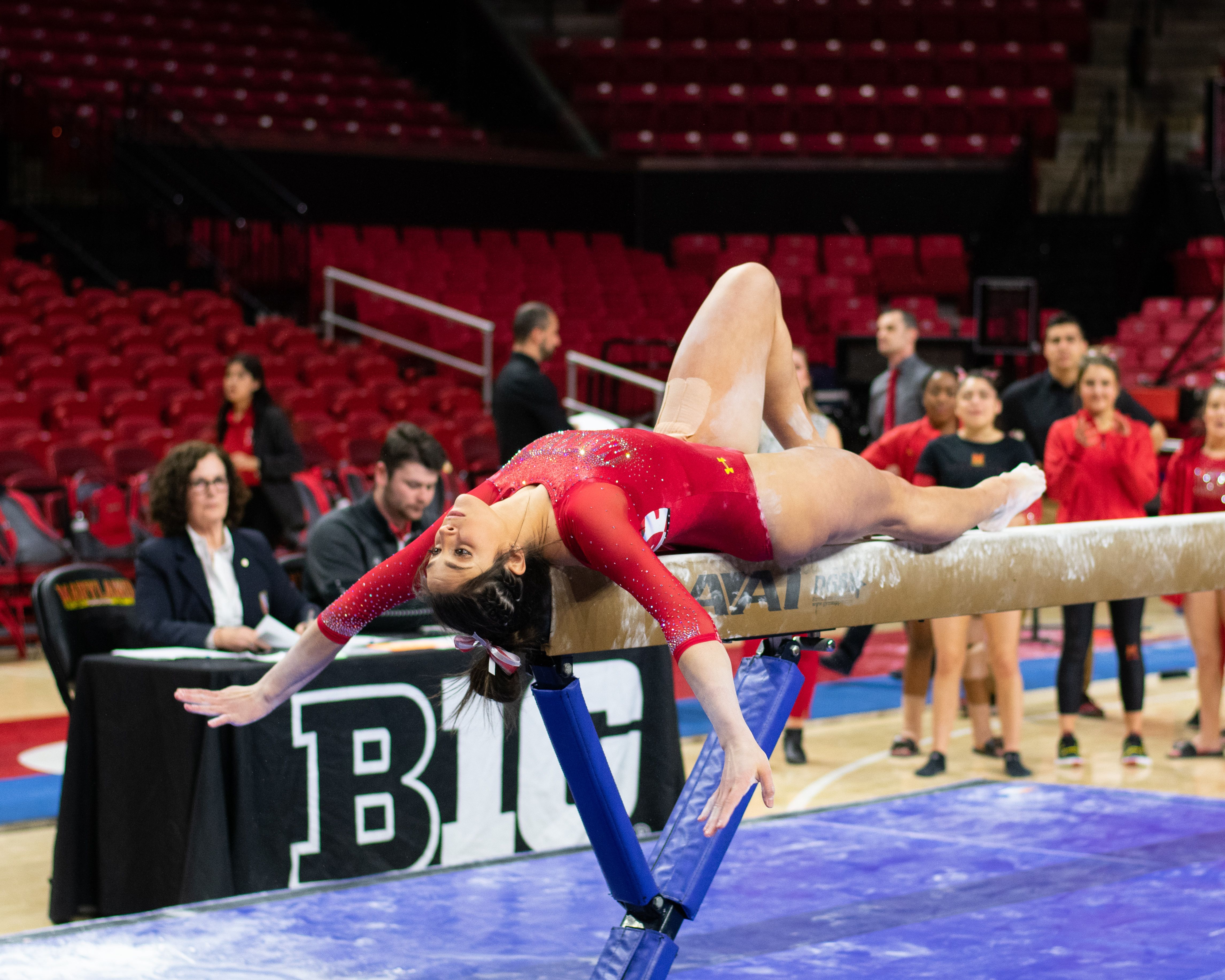 After Maryland gymnastics posted a 48.675 on bars in Friday’s meet — the Terps’ lowest score of the season in that event — junior Tiara Wright relished the chance to return to the gym Monday, hoping to improve upon that display.

“[We] just want to redeem ourselves,” Wright said.

Maryland ranks No. 24 on bars this year, earning 49 four times. But in Monday’s competition against George Washington, coach Brett Nelligan’s squad floundered once more in the event it had excelled in to that point, recording a 48.25. The new low-point set up an uphill climb in for their finaeason two rotations.

The Terps rose to the occasion, finishing the meet strong with an improved performance on beam and a season-high on floor. Despite a disappointing showing on bars, introducing a two-meet slump on its best event, Maryland showed promise in its other routines to keep itself in contention for an NCAA Regionals berth.

“For them to finish like that, to come from behind,” Nelligan said. “It was fun to watch.”

The Terps have suffered from inconsistency on vault, floor and beam this season, only breaking 49 twice in the three events. On Monday, though, the Terps put in spirited efforts on these three apparatuses, overcoming a frustrating performance in Friday’s tri-meet against then-No. 19 BYU and George Washington.

After breaking 195 in all four of its February meets, Maryland failed to hit the mark in its past two attempts, suffering from uncharacteristically poor displays on bars.

The Terps’ 48.25 on Monday was their lowest score since the first meet of last season, even with strong performances from sophomores Audrey Barber and Emilie LeBlanc. Their 9.875 and 9.825, respectively, weren’t enough to overcome two other falls in the event.

Following a poor display on vault Friday, sophomore Collea Burgess led Maryland’s resurgence in the event to open Monday’s competition, earning a 9.825. Meanwhile, Barber added a 9.825 of her own as the Terps improved their vault score by .125 points, earning their third best of the season.

Maryland rebounded from its uninspiring performance on bars to put together a solid showing a beam. LeBlanc led the way, scoring a career-best 9.875, a mark that initially even surprised the sophomore.

“We actually weren’t looking at scores today,” LeBlanc said, “so I didn’t even know it happened until [the end of the meet].”

Barber put up another 9.825, while senior Shynelle Agaran matched her season-high score of 9.775. Their performances helped push the Terps to a 48.825, tying their third-best score on the event this season.

Entering the final rotation Monday, the Colonials held a slight lead. The Terps had broken 49 on floor just once up to that point and were coming off their lowest score in the event since Jan. 26, seeming to slim their comeback potential.

However, the Terps rallied behind Burgess, who dazzled the judges and the crowd on her way to a career-high 9.925, the highest score in any routine from a Maryland gymnast this campaign.

“It was amazing,” Burgess said. “It’s just amazing to know that your hard work pays off.”

Burgess’ performance headlined a stellar display by the floor lineup, with Barber earning a 9.875 and sophomore Sabriyya Rouse adding a season-high of 9.825. Those, coupled with three scores of at least 9.75, propelled Maryland to a season-high 49.15 on floor to secure a comeback victory over George Washington.

While the Terps missed out on hitting 195 for the second straight meet, their resurgent performance after a dismal score on bars fills a young squad with confidence as it aims for another NCAA Regional appearance.

“[This meet] shows how strong we are,” Burgess said. “This is our second meet of a double weekend, which was tough. … To come out strong [and] full of force, it says a lot about us.”