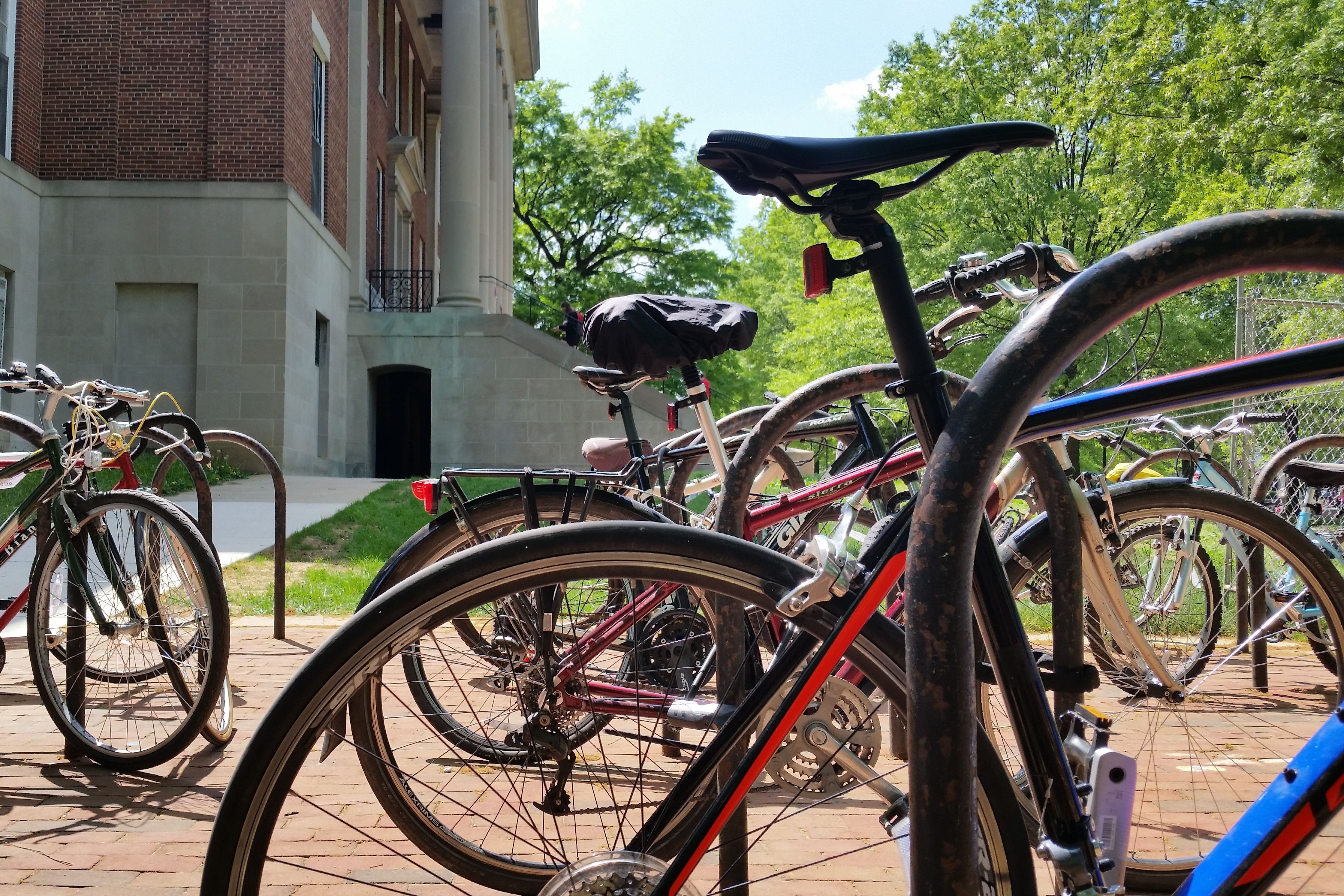 Bicycles sit in racks outside Francis Scott Key Hall on May 9, 2018. (Ryan Romano/For The Diamondback)

Riding his black-and-orange Kawasaki Ninja 400 along Route 29 on his way to the University of Maryland, Jonah Hornum noticed a small sedan coming up behind him.

Hornum was driving the speed limit, so he didn’t understand why the driver was trying to weave over the lanes and cut him off.

The driver almost hit him, and Hornum barely moved out of the way in time. He nearly flipped over.

In Maryland, striking a biker, pedestrian, motorcyclist or mobile transportation vehicle with a car can incur up to a $500 fine. Typically, though, drivers get off with a $110 prepaid fine and no court appearance — something a new bill aims to drastically change.

The bill — sponsored by two senators and 23 delegates — would bump that fine to a maximum of $2,000 and impose a mandatory court appearance on anyone who hits a biker, pedestrian, motorcyclist or any mobile rider with their vehicle and causes serious injury or death.

Additionally, depending on the court’s ruling, a driver in violation of the law could have to work up to 150 hours of community service and participate in a motor vehicle safety course. They would also lose their license for anywhere from seven days to six months.

The bill passed the House of Delegates with a 141-0 vote and is on its way to the Senate.

Del. Stephen Lafferty (D-Baltimore County), the lead sponsor of the bill’s House version, said the current law does not deter nasty behavior or accidents caused by drivers on the road.

“Right now, I think people are getting off pretty easy,” he said. “If increasing the penalty enables more people to be held accountable and, secondly, to change the way they behave so no one is seriously injured or killed, then we’ve succeeded.”

But Hornum said he thinks things are unlikely to change.

“Maryland drivers don’t care about motorcyclists,” the sophomore enrolled in letters and sciences said. “Among motorcyclists, we have a saying: ‘Even if we look a driver in the eye, we have to pretend we are invisible.’”

Mags Hansen, a freshman mechanical engineering and theater major, rides a bicycle to some of her classes. She said the bill would make her feel safer since many drivers “don’t share the road.”

“I would feel more protected on the road if I knew it was a heavier fine than $500,” she said.

Hansen said she’s often booted to the sidewalk from campus roads and “feels bad” riding there because she has to weave between so many walkers.

Lafferty said a primary goal of the bill is to not only stop aggressive behavior from drivers against “vulnerable individuals” — those protected also include anyone who drives a scooter, moped or even a farm tractor — but also to avert life-threatening accidents.

“You can’t always be sure that what you’re doing is going to make a difference,” he said. “But that is certainly the goal.”

“In a crash between a car and a motorcycle, the car driver is more likely to be at fault than the motorcyclist,” according to the MVA.

On this university’s campus, there were five reported incidents of cars striking bicyclists in 2017, and four reports in 2018, said University Police spokesperson Sgt. Rosanne Hoaas.

If the bill becomes law, Maryland would join Colorado, Mississippi, Louisiana and Vermont, which have all passed stricter laws on aggressive driving behavior to protect pedestrians, bikers and motorcyclists.

Last year, a similar bill passed the House only to be struck down in the Senate.

In 2010, the U.S. Department of Transportation issued a statement to encourage states to adopt laws that protect pedestrians and bikers.

“Because of the numerous individual and community benefits that walking and bicycling provide,” it read, “transportation agencies are encouraged to go beyond minimum standards to provide safe and convenient facilities for these modes.”