“The only time these names are remembered”: UMD event honors filicide victims 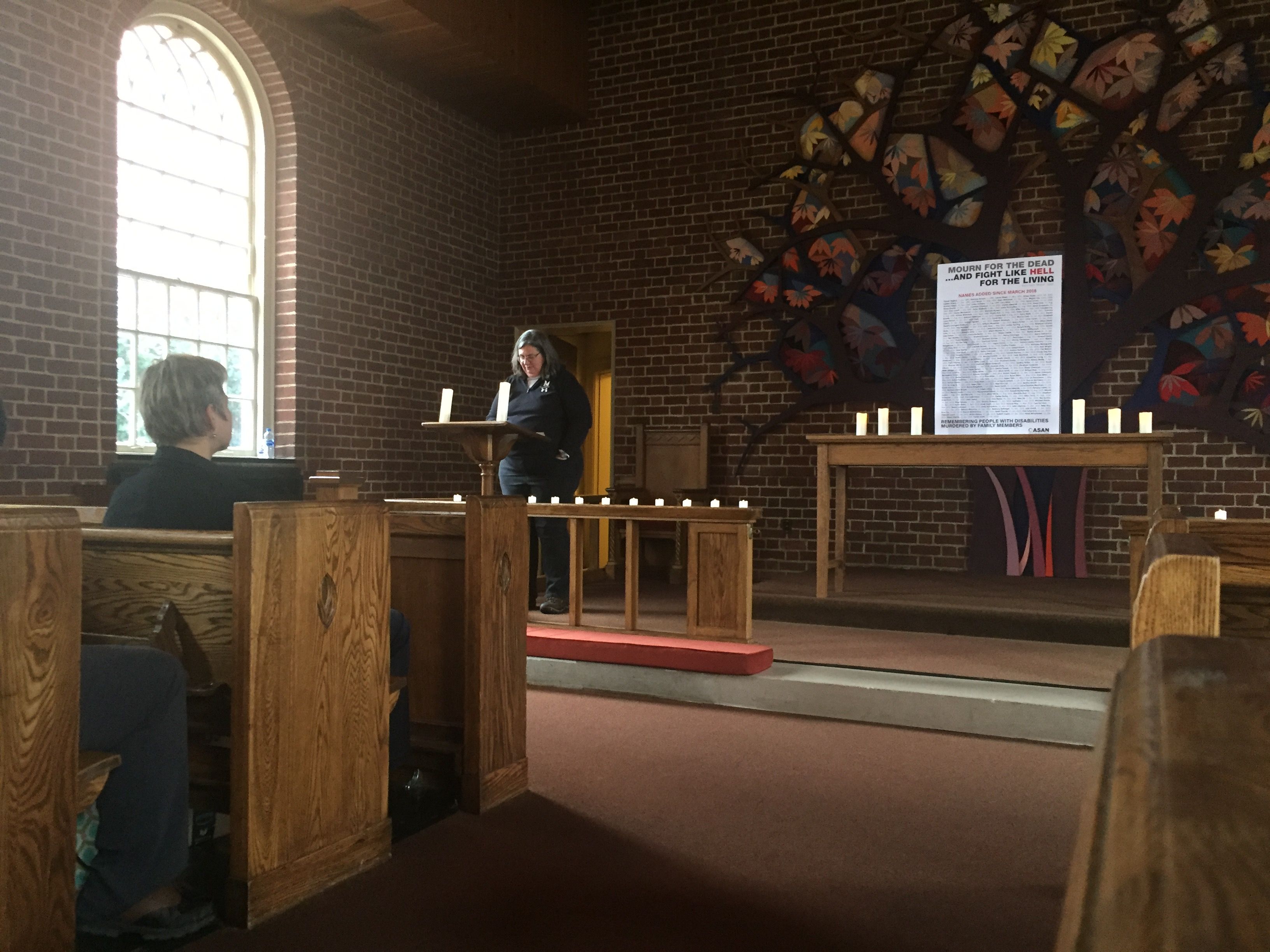 The Day of Mourning, an annual event designed to bring awareness to disabled victims of filicide, was held at the Garden Chapel on March 1, 2019. (Victoria Ebner/For The Diamondback)

Inside the University of Maryland’s Memorial Chapel on Friday, a table covered with Life Savers, red clothespins and informative programs sat ready.

The red clothespins were for attendees who were emotional and did not want anyone to talk to them during the event, the Life Savers for people to suck on during the presentation.

Yet, with only a pastor, two event organizers and four others in attendance, the table was barely touched.

“It was kind of disappointing,” said Michelle Appel, one of the event organizers. “I think it’s one of those things in general that people just aren’t aware of.”

The event — called the Disability Community Day of Mourning — is held every year on March 1 to honor the disabled victims of filicide, the act of a person being killed by a parent or caretaker.

The memorial was organized by the Autistic Self Advocacy Network, which helps catalog the cases so the victims can be recognized. It was hosted by the President’s Commission on Disability Issues, which advises the university’s administration on issues pertinent to people with disabilities.

More than 650 disabled people of all ages were killed by their caretakers in the last five years, with more than 70 new cases since the last vigil, according to the organization.

Appel, who works in the university’s Office of Institutional Research, Planning and Assessment, said most cases shown in the media sympathize with the “suffering” caregiver tasked with taking care of an individual with disabilities.

“I’m the mother of an autistic person,” Appel said. “I cannot imagine — I just can’t even imagine, as a mother, doing that.”

Last year, the first time the event was held at this university, the event was co-sponsored by an organization called Terps for Disability Justice — a disability self-advocacy group and an affiliate of national advocacy group DREAM. Then, the group was able to advertise with chalk outside the Stamp Student Union, participate in the event, and help with set up. About 15 to 20 people attended last year’s event, Appel said.

This year, the group disbanded because their leader was a senior, Appel said. She paid for the Life Savers, printing the poster, clothespins, and tea candles out of her own pocket.

The memorial began with a introduction about the prevalence of filicide. Then, Appel, along with her daughter Alexa, and Ana Palla-Kane, a co-chair for the president’s commission, read the names of filicide victims, followed by a prayer from Rev. Ray Ranker.

Alexa, who has autism, attended the event with her brother Ben, who has a learning disability. She said that attending the event means a lot to her.

“Sometimes this is the only time these names are remembered,” she said. “It’s a way to keep them in memory and mourn them, if no one else will.”

Palla-Kane said she feels that the lack of participation within the cause stems from the general population’s lack of awareness.

“With most people, when we talk and share with people around the campus, people get really amazed that this actually happens,” Palla-Kane said. “Our role here within the university is really to educate people with this.”

Despite the low turnout, Appel said they are still planning on holding the event next year — hopefully co-sponsored by another group, and with more advertising to promote it.

“Disabled people are people — their lives are not less than,” she said. “That’s the biggest message we hope people come away with.”