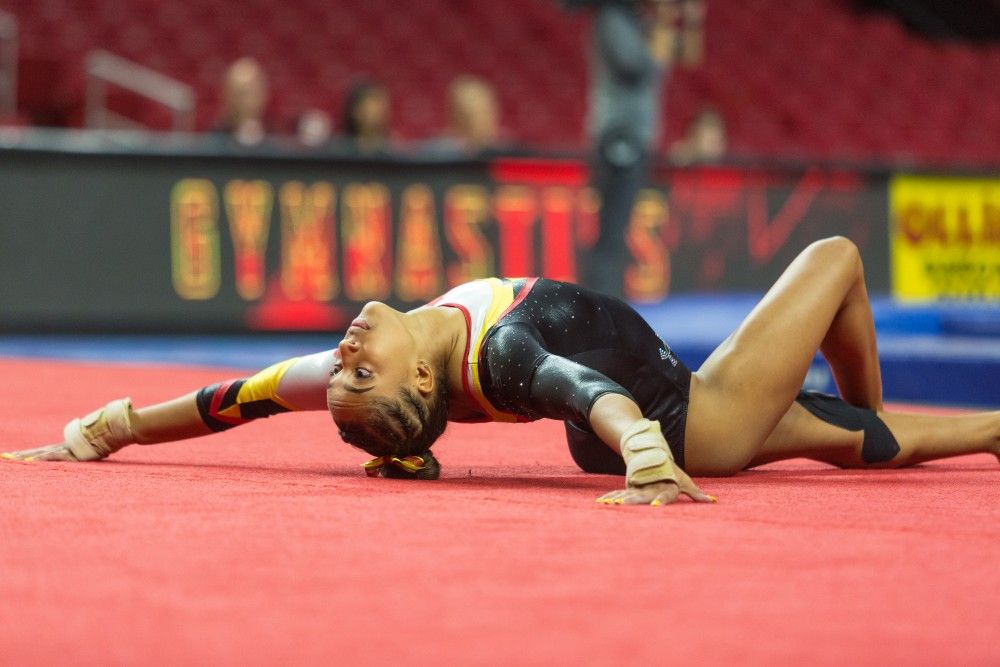 Over the weekend heading into Monday’s meet against George Washington, the Maryland gymnastics team focused on ignoring negativity, hoping to bounce back from a disappointing performance Friday.

So even though the Terps trailed the Colonials entering the final rotation Monday, and even though they were closing the meet on the event they struggled on mightily three days earlier, they didn’t panic.

Led by an electrifying 9.925 from sophomore Collea Burgess and another high mark from Audrey Barber, the Terps posted a season-best 49.15 on floor to salvage a respectable score and a 194.975-194.675 win on a night they counted a fall on bars, their strongest event.

“We decided to ignore everything that’s negative around us,” sophomore Emilie LeBlanc said. “I think it helped us tremendously.”

Burgess’ career-high 9.925 served as the meet’s exclamation point and was the team’s first 9.9 on any event this season, but it was Barber who led Maryland throughout Monday.

Barber had one of the best meets of her career, setting or matching season-highs on all four events and posting a 39.4 all-around score.

Barber and Burgess tied for the vault crown with 9.825s, powering the team’s 48.75 in the first rotation. It was Barber’s fourth 9.8 on vault in the past five meets, while Burgess had been left out of the lineup due to injury on Friday but made a triumphant return which electrified her teammates.

“It’s always just about us coming together and rallying,” Burgess said. “Regardless of the previous meet, regardless of who we’re going up against next, it’s all about being in the moment.”

Things went awry for the Terps on bars, though. Their struggles from Friday’s meet — when they posted a season-low 48.675 — continued, and due to falls from junior Kirsten Peterman and freshman Sanya Glauber, they scored a 48.25 despite a 9.875 from Barber.

The Colonials led 97.175-97.000 as Maryland moved to beam. On Friday, the team impressed with five scores of at least 9.725, and it backed up that performance Monday.

“We had a slight mishap on bars — that’s unusual for us,” Nelligan said. “For them to put that aside and come back super strong on beam, I was really proud of them.”

Barber and LeBlanc posted 9.875s — a season-high for Barber and career-best for LeBlanc — and senior Shynelle Agaran matched her season-high with a 9.775.

The Terps fell just short of their 48.85 from three days earlier, but their 48.825 was still a promising sign on an event they struggled on early in the year, and set the stage for a breakout performance on floor.

“We finally put it all together on the floor the way that we thought we were capable of,” Nelligan said. “And the scores followed.”

Peterman started with a 9.775, Sabriyya Rouse earned a 9.825 and Alecia Farina scored a 9.75 before Barber and Burgess found a new level, posting the type of high-level scores necessary to prevent an uneven meet from turning into a disaster.

After Friday’s frustrating display and an uneven start Monday, the team showcased its tenacity during the comeback, something that has been a constant theme of a season that has been far from smooth sailing.

“Toughness is our cornerstone of what this team is built on,” Nelligan said. “We had a meet two days ago … for them to come out two days later and put up a huge performance like this and get the win, I’m really proud of them.”