Behind Ignas Brazdeikis, No. 9 Michigan tops No. 17 Maryland men’s basketball, 69-62 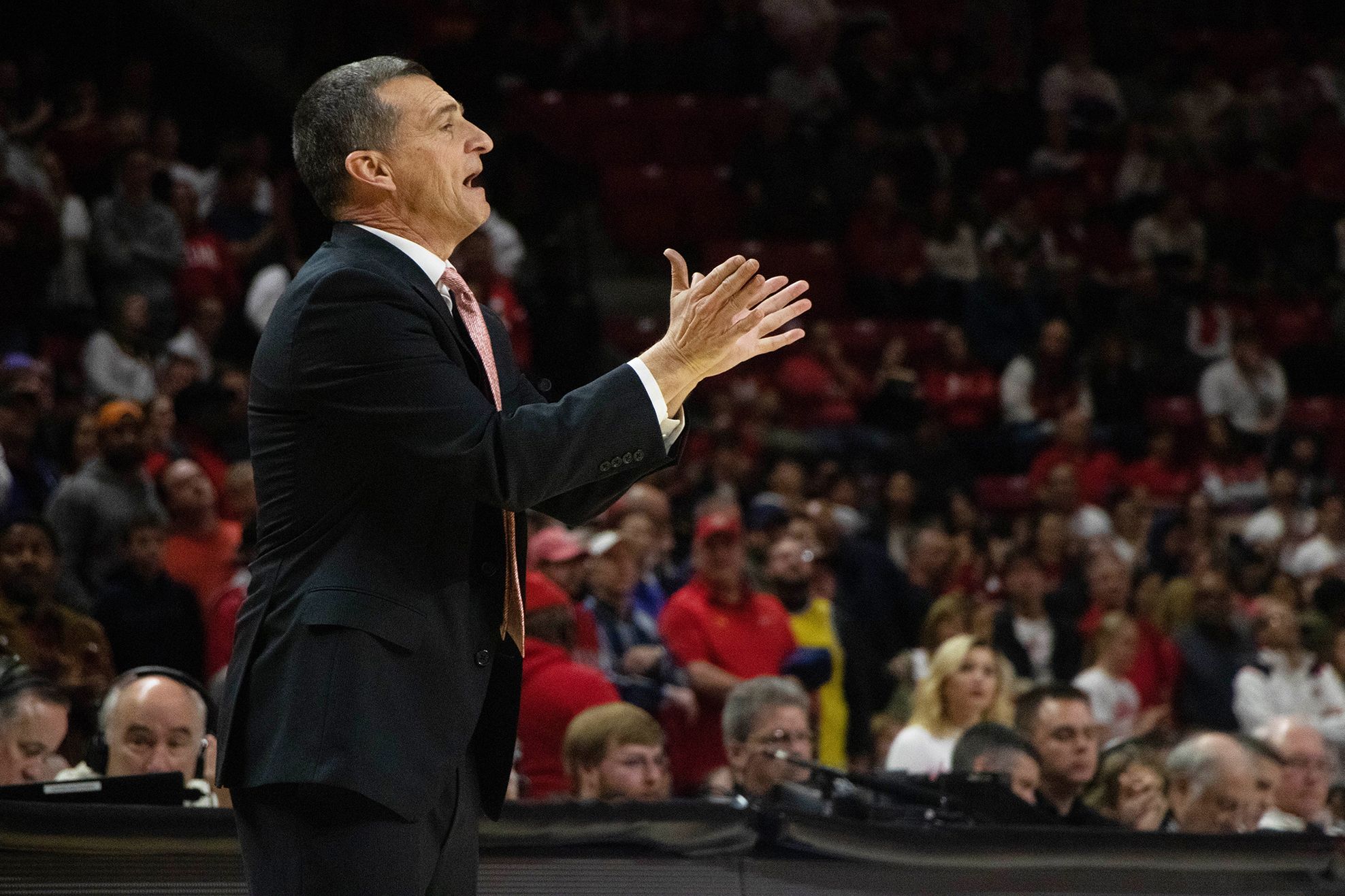 After the final buzzer sounded on Maryland men’s basketball’s game against Michigan, Wolverines forward Ignas Brazdeikis walked away from his team’s bench and blew the Xfinity Center student section a kiss, then put his hands to his heart and extended his arms out toward the seats, the last laugh in a back-and-forth that had quickly turned one-sided.

About 90 minutes and 21 Brazdeikis points earlier, the crowd chanted, “You are ugly,” as he shot free throws. The jeers drew a scolding from coach Mark Turgeon, who requested via the PA announcer for the chant not to make a return.

In the second half, though, Brazdeikis took the role of crowdsilencer into his own hands.

Brazdeikis’ game-high 21 points, including nine down the stretch, led No. 9 Michigan past the No. 17 Terps, 69-62, in a matchup where Maryland hung around but could never separate. And once Brazdeikis and his teammates began hitting shots — scoring on eight of their final nine possessions — Turgeon’s squad couldn’t keep up.

“I love crowds like that. … I just feed off that all day long,” Brazdeikis said. “I was like, ‘You know, these guys are on me? I might just blow them a little kiss.’”

Those buckets erased any thought of the slow start that doomed the Terps during their 65-52 loss to Michigan on Feb. 16, but the Wolverines (26-4, 15-4) were unfazed, locking down on defense and preventing guard Anthony Cowan and forward Bruno Fernando from getting going.

On the other end, Maryland struggled to stop Michigan without fouling, especially when Brazdeikis had the ball. He drew nine fouls Sunday, and his free throws — through the infamous chants — helped his team hang in throughout a first half when shots weren’t falling.

After a 6-0 run from Maryland built a 22-16 lead with 7:09 to play in the first half, Michigan’s vaunted defense really put the clamps on Turgeon’s squad, holding the Terps scoreless for nearly six minutes.

A triple from Brazdeikis — after his team missed its first eight three-point attempts — cut the lead in half with 4:43 left in the opening period. It was the start of a 12-2 Michigan run to close the half, taking a 28-24 lead to the locker room despite shooting 37 percent from the field.

The Wolverines were aided by an ugly final possession for Maryland, which resulted in a 25-footer from Cowan with 10 seconds left on the shot clock, allowing guard Zavier Simpson to easily beat the buzzer with a layup.

“We didn’t play particularly well at times, but we battled,” Turgeon said. “We wanted this bad today and we just couldn’t get it.”

The Terps again got off to a hot start in the second half, with Smith keying a 6-0 personal run after being a nonfactor in five first-half minutes due to foul trouble. His three scores pushed Maryland to a 36-35 lead and drew a timeout from Beilein, whose offense looked out of sorts after Simpson picked up a third foul and headed to the bench early after halftime.

Out of the stoppage, though, Brazdeikis and guard Jordan Poole hit shots to take a three-point lead, which guard Eric Ayala erased with a 3-pointer that tied the game at 39. Fernando followed that with a hookshot to put the Terps up, but again the Wolverines responded, going on their second 12-2 run of the evening.

“In the second half, the same story; they really came out strong,” Beilein said, “… and we just answered really well.”

Shortly after Simpson returned from his extended absence, forward Isaiah Livers sparked the run with a 3-pointer. Brazdeikis then punctuated his own trey with a kiss to the crowd, and the 6-foot Simpson nailed two of his four hookshots over Maryland bigs, a feat which stuck in Turgeon’s mind.

“Are you kidding me?” Turgeon said. “One, I can get, but four? How terrific is he? I mean, he’s the whole difference in the game.”

By the time Fernando got to the line and stopped the run with 4:17 left, the Terps were trailing by eight points, and they never pulled closer than five the rest of the way. Cowan came alive after his 1-for-11 start to finish as one of five Terps in double figures, alongside Fernando, Smith, Ayala and Morsell. But it wouldn’t matter.

Buckets from Livers and Brazdeikis, and a 3-pointer from center Jon Teske reminiscent of the dagger he hit in the team’s first matchup, powered the Wolverines to a scorching finish.

“We guarded how we were supposed to,” Morsell said. “They just made some big shots when they had to.”

Those tough shots — which weren’t falling early — meant Brazdeikis could perform some well-earned taunts before joining the handshake line, having kept his team alive in the hunt for a regular season title and dished the Terps another blow in their quest for a double bye.

“We’re chasing the Big Ten championship. … I embrace that kind of pressure,” Brazdeikis said. “It was a lot of fun. I just enjoy every second of it.”