With two meets in four days, Maryland gymnastics wants to build its momentum 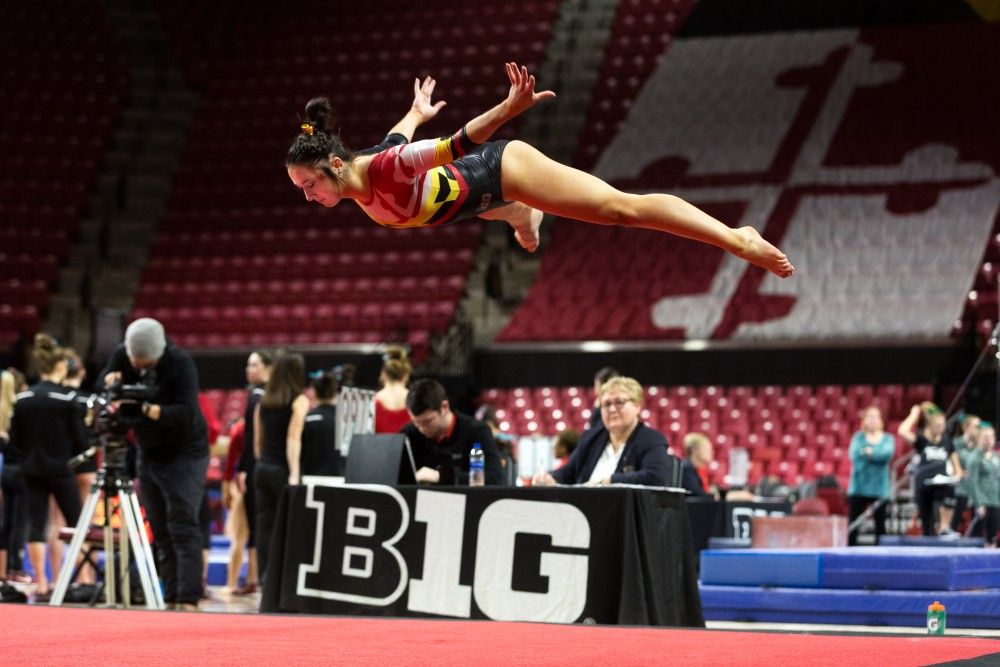 While Maryland gymnastics has rebounded after a slow start to the season, the team hasn’t had many chances to show off that improvement, with just seven meets to this point.

The Terps have now broken 195 in four straight meets — including last weekend’s Big Five meet — but they’ve been unable to earn their first 196 of the season.

That could change this weekend, when Maryland takes part in two meets in four days. It’s a critical portion of the season, as the Terps will be hoping to improve on their regional qualifying score and solidify their status as one of the top 36 teams in the country, which would send them to NCAA Regionals.

“We’re looking at this as an opportunity,” junior Kirsten Peterman said. “We get two scores in one weekend, where most teams are really only getting one score.”

Last season, Maryland traveled to George Washington University to take on Towson, Rutgers, and the then-No. 19 Colonials. Inspired performances by then-freshman Audrey Barber and then-sophomore Peterman — who scored 9.9 on floor and bars, respectively — helped the Terps earn a 195.825, their second-highest score of the season at the time.

Maryland will be hoping to recreate some of that performance when it returns to the Charles E. Smith Center on Friday to face off against George Washington and No. 19 BYU, before hosting the Colonials at Xfinity Center on Monday.

At last weekend’s Big Five meet, the Terps faced off against No. 18 Nebraska, Penn State, Iowa, and Michigan State. Despite finishing fourth in the meet, they earned their second-highest score of the season, posting a 195.5.

“We actually felt like that was an off-meet for us,” coach Brett Nelligan said. “If an off day for us is a 195.5 and the second highest score of the meet, that’s great. That means we’re really good.”

Maryland has had at least five days of rest in between each meet to this point. In preparation for the shorter turnaround this weekend, the coaching staff tweaked the team’s practice schedule, with one less lift than usual.

“It’s just allowed us to be prepared and peaked for the weekend,” Peterman said. “It’s been a good balance between resting and actually practicing.”

The Terps will be hoping to build upon an impressive display on vault, where the team earned a season-high 48.925. Barber and fellow sophomore Collea Burgess impressed in the event — earning a 9.8 and a 9.825, respectively — while junior Alecia Farina added a 9.8.

“We’re always fine-tuning [and] looking at the details,” Nelligan said. “We’re really trying to narrow down any tenths that we’re giving away and try to eliminate any of those deductions.”

With two meets in such quick succession, there will be questions over Maryland’s mental and physical endurance. But the Terps, armed with a strong mentality, are ready for the challenge.

“Our team is mentally tough enough to zone out any injuries,” sophomore Emilie LeBlanc said. “[We’ll] take everything one skill at a time and not get ahead of ourselves.”