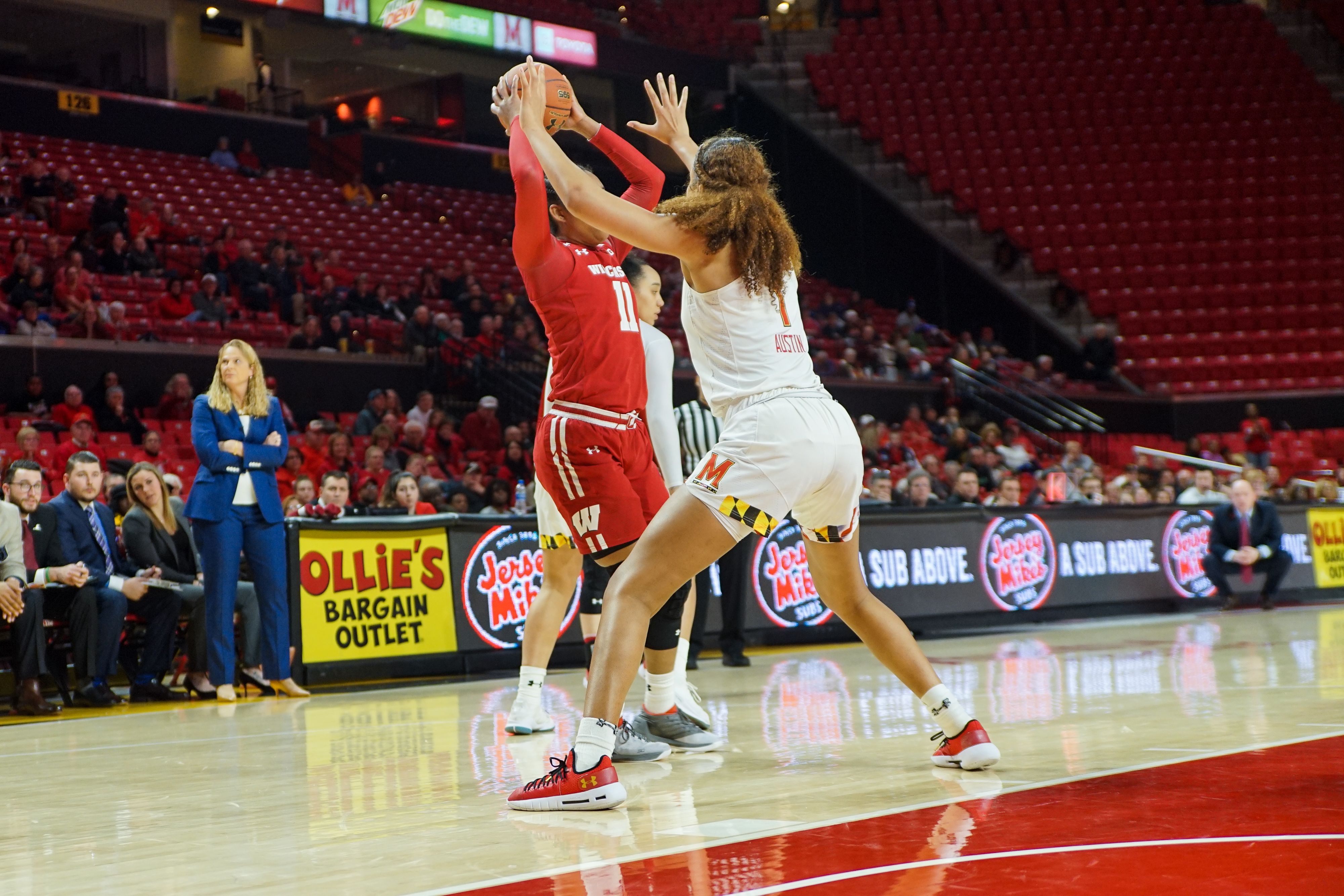 Forward Shakira Austin blocks off the paint during Maryland’s 75-57 win over Wisconsin at Xfinity Center on Jan. 31, 2019. (Corey Hart/The Diamondback)

Trailing by nine with under three minutes left in the third quarter Thursday against Purdue, Maryland women’s basketball coach Brenda Frese stoically walked the sideline, head down, as guard Taylor Mikesell dribbled up the floor.

Even with her team facing another second-half deficit after scoring a season-low 23 first-half points, the 17th-year coach didn’t display any overt signs of frustration.

Trailing 43-34, the No. 8 Terps channeled Frese’s resolve, finding a solution when their outlook on offense looked bleak. Maryland’s defense stepped up to keep the Boilermakers off the scoreboard for more than eight minutes, and the team made the most of the stretch to go on a 13-0 blitz and take control of the game.

Aided by the strength of its defense, Maryland managed to scrape past Purdue, 58-55, and clinch at least a share of a fourth Big Ten championship in five years.

“We were kind of able to separate with the defensive plays we were able to make,” Frese said. “Obviously, our defense and our rebounding were critical in those stretches.”

The run, although game-changing, wasn’t the sort of fast-paced explosion the Terps have developed a knack for.

Following a jumper from guard Kayana Traylor with 2:42 left before the deciding frame, Purdue missed its next six shots. Maryland, though, took nearly seven minutes of game time to score its 13 points, a slower rate than offensive onslaughts of the past.

When facing adversity in the past, the Terps have often raced to the finish line to overcome slow starts — such as when the squad scored nine points in under a minute to beat Minnesota, 71-69, on Thursday. But on Monday, Maryland triumphed in a war of attrition.

The Terps’ defensive rebounding acumen and propensity to force turnovers were the biggest factors in shutting down the Boilermakers. Purdue corralled just one of its six misses during its dry spell — Maryland won on the glass 43-33 overall — and compounded matters by giving possession away seven times before guard Dominique Oden scored with 4:30 left in the game.

With forward Brianna Fraser out with an ankle sprain and forward Stephanie Jones on the bench after two fouls in the first three minutes, Charles was forced to play down on the block. She finished with a season-high 13 rebounds.

“[We’re] not just depending on the post players to box out,” said forward Shakira Austin, who finished with a team-high 14 rebounds. “Our guards have to come down and box out, too.”

Additionally, the Terps did well to stymie guard Karissa McLaughlin — the Boilermakers’ leading scorer with 15.4 points per game — as the sophomore finished with only three points and made just 1 of her 10 attempts from the floor.

“She’s so talented,” Frese said. “They have so many great weapons. I think you saw both teams’ triangle-and-two, making other players have to step up and make shots.”

By keying on McLaughlin, Maryland dared Purdue’s supporting class to beat them. Sans Traylor — who notched 18 points on 7-for-11 shooting — the plan worked to perfection, with Purdue shooting just 34.9 percent from the field.

As the empty trips down the floor stacked up, Maryland eventually pulled ahead. It wasn’t a textbook performance for the Terps — none of them have been lately — but they found a way to win, putting them in position to capture their fourth Big Ten title outright with a victory over Illinois on Saturday.

“It speaks volumes to our consistency to be able to come on the road and be able to win,” Frese said. “But for us, continuing to grow as a team and being able to continue to get better [is our goal].”