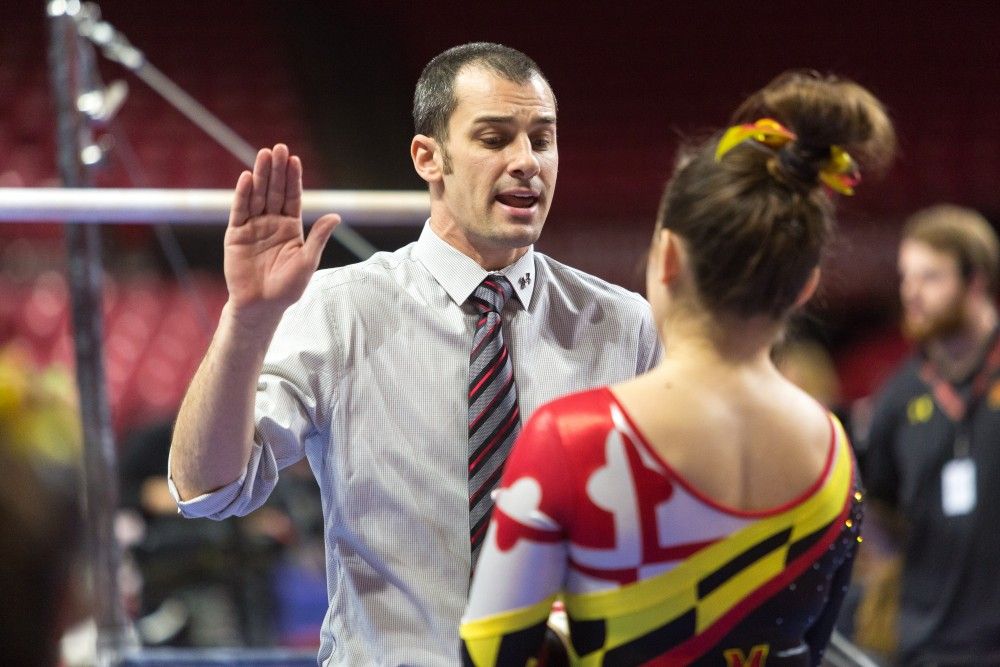 On Friday, with a raucous Toledo crowd watching on, junior Kirsten Peterman stretched out for a double layout off the uneven bars. She stuck the landing en route to a 9.8 score in the event for a second successive meet, eliciting a lively response from her Maryland gymnastics teammates.

But it was coach Brett Nelligan who had the most vociferous reaction. Nelligan passionately celebrated Peterman’s smooth dismount, letting out one of his signature fist pumps.

Nelligan, last year’s Big Ten Coach of the Year, understands the importance of showing passion in what can be a stressful sport. He has developed a well-rounded coaching staff that values supporting their gymnasts in and out of competition.

“I think [passion] is very important,” Nelligan said. “Fans and judges should look at our team and say, ‘Wow, they’re having a blast.’”

Earnest advice from Nelligan and assistant coaches Erinn Dooley and JJ Ferreira has helped propel the young, talented squad toward another potential appearance in the NCAA Regionals.

The Terps’ coaches have focused training around the technical aspects of gymnastics. With Dooley coaching beam, Ferreira leading vault and floor and Nelligan taking charge of Maryland’s bar routines, the team’s coaching is particularly well-rounded, which rubs off on the gymnasts.

“I like to think that all of our coaches play a huge part in our success as a team,” sophomore Emilie LeBlanc said. “It’s just the whole effort as a group that really helps our team succeed.”

The focus on technique has made a significant impact on the Terps’ performances, as they’ve reeled off a stretch of four straight 195s, pushing the team up to No. 32 in the national rankings.

The coaching staff has cultivated a strong relationship over the course of many years. Dooley joined Nelligan’s staff when Nelligan was promoted to head coach in 2009, while Ferreira is enjoying his second stint at Maryland — he previously served as an assistant coach from 2010 to 2016 before returning this season.

“They’re rocks for me,” Nelligan said. “They’re phenomenal coaches — they know everything they need to know about gymnastics. But more than that, they’re great people. … They’ve become like family to me.”

The coaches’ personalities have helped elevate the Terps’ performances, with their charisma in addition to their wealth of gymnastics knowledge, fostering a welcoming environment in the gym.

“They understand the mental aspects of [gymnastics], and they’re not only able to help us in the gym … but just in general, with life,” Peterman said.

Throughout the season, the coaching staff has stressed the value of relaxing and working through routines by focusing on a single skill, completing that skill and then moving on to the next skill.

Armed with that mindset, the Terps have positioned themselves right in the midst of contention for a place in the NCAA Regionals, posting a 195.5 at Friday’s Big Five meet.

But with an experienced coaching staff at the helm, Maryland won’t look beyond its next meet, a tri-meet with George Washington and No. 19 BYU, just as they have done throughout the season.

“We just gotta keep pushing,” Nelligan said. “Then the scores will follow.”