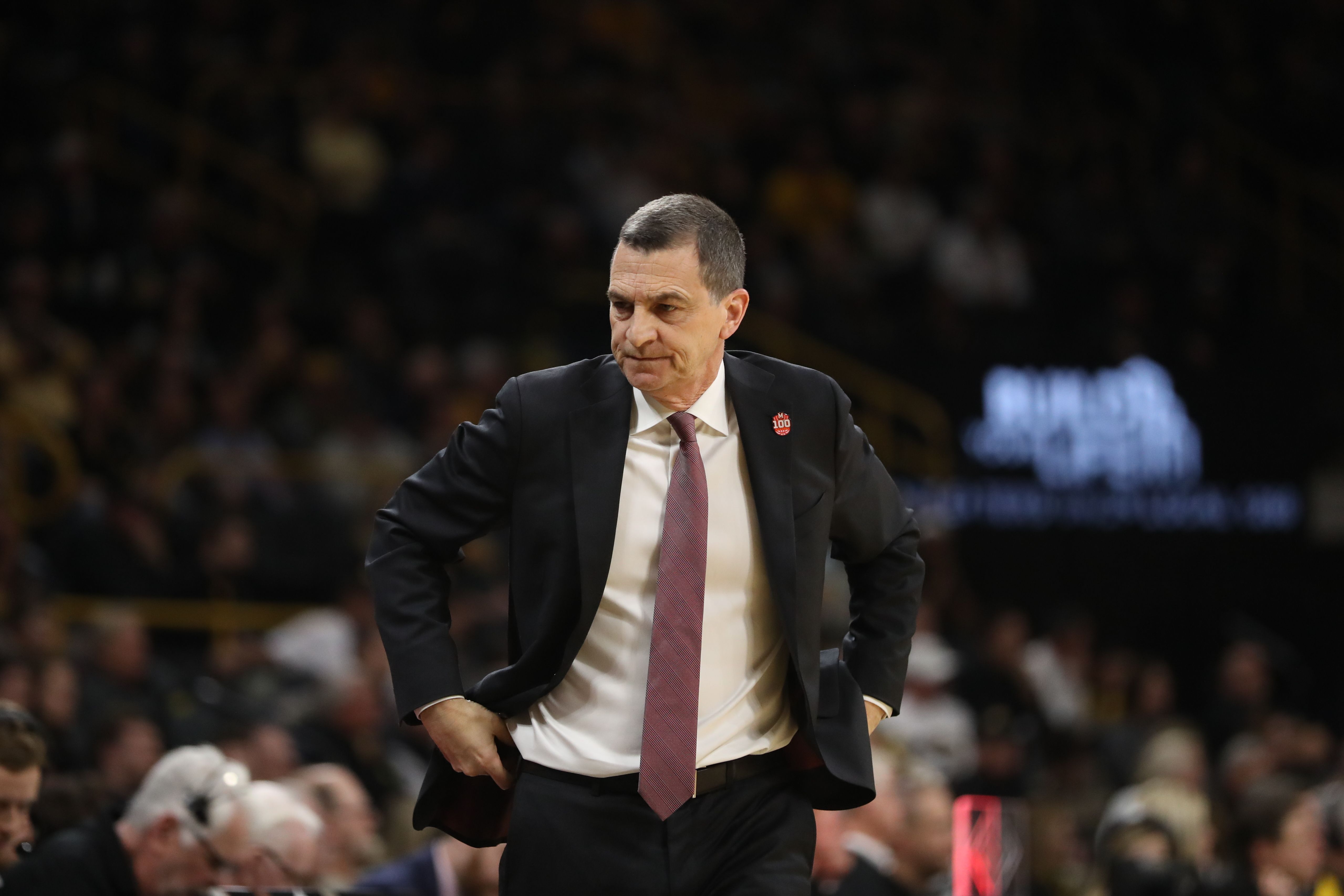 Head coach Mark Turgeon looks at his sideline during No. 24 Maryland's 66-65 win over No. 21 Iowa at Carver-Hawkeye Arena on Feb. 19, 2019. (Courtesy of David Harmantas/The Daily Iowan)

UNIVERSITY PARK, Pa. — After his team’s fourth turnover in the first four minutes of the second half, Maryland men’s basketball coach Mark Turgeon had seen enough.

Turgeon turned toward his bench and kept waving his hand as player after player leapt up and jogged to the scorer’s table — five in all — in an attempt to scrub away any recollection of the heinous sequences that had just unfolded on the Bryce Jordan Center floor. Guard Anthony Cowan tossed a pass away on the Terps’ first possession. Guard Darryl Morsell had it stolen away a minute later.

Cowan attempted to push the pace with Maryland trailing by 20, only to have guard Jamari Wheeler steal it away at the rim, leading to forward Lamar Stevens’ wide-open 3-pointer. Forward Bruno Fernando’s turnover was just the cherry on top of a rapidly melting matchup between No. 17 Maryland and Penn State, spurring the mass-substitution.

It never got any better in a midweek letdown as the season winds to a close. Penn State beat No. 17 Maryland, 78-61, as a dreadful start and turnovers-galore dug a hole the Terps never looked capable of overcoming.

Maryland has become notorious for slow starts, but Wednesday’s opening was particularly lackluster, and didn’t feature the rebound that the Terps have used to climb out of other early deficits. Morsell turned it over twice in the first three minutes, and while forward Jalen Smith hit a three, he struggled to convert at the rim, shooting 2-for-7 in the opening frame.

After Nittany Lions guard Myles Dread hit the first two of three free throws midway through the first half, Penn State gathered the rebound following the third and found Dread open on the wing. The freshman nailed another triple, part of a personal 7-0 run.

Dread powered the Nittany Lions in the first half Wednesday, scoring 15 points on 4-of-8 shooting and outscoring the Terps by himself until the 5:18 mark, when a basket from Fernando finally pushed Maryland across the 15-point threshold.

“Our defense and rebounding really dictated those open shots for him,” Penn State coach Pat Chambers said. “That helps us, and it deflates the opponent a little bit.”

But then the Terps went another four minutes without a point, including an open three for Wiggins that clanked before he fouled Dread on the next possession. The Terps shot 31 percent in the first 20 minutes, hitting one 3-pointer and turning the ball over eight times — four of which were from Fernando.

And after a dreadful start to the second, Turgeon elected to rotate his lineup completely, trailing 49-24.

“Trying to find something to work,” Cowan said. “We couldn’t really get in a rhythm today. So we just tried to go with another five.”

The subs hardly stymied the Nittany Lions, and Turgeon eventually reinserted his starters. Their first possession ended after misses from Morsell and Smith, and then Cowan added another one of Maryland’s 17 turnovers, the fourth straight game with at least 15.

Cowan finished with 15 points but committed five turnovers. Guard Aaron Wiggins chipped in 11 points, but missed all four attempts from deep, part of the Terps’ 2-for-19 performance from beyond the arc. Stevens scored a game-high 24 for Penn State, and though Dread cooled off to finish with 17, he’d already done plenty of damage.

“It was almost like an onsetting bug that we just had as a team, kind of like a sickness, that you just wake up one day and have,” Ayala said. “We just had that today. We dug ourselves in a hole in the first half, and we fought back in the second half, but we just dug it too deep.”

After No. 21 Wisconsin lost to Indiana in double overtime Tuesday, Maryland appeared to hold the inside track for a top-four seed in the Big Ten tournament. The Terps’ toughest matchup to end the regular season was supposed to be Sunday in College Park against No. 9 Michigan.

That may well still be the case. But the Nittany Lions — playing in a half-filled arena with the bare upper decks shrouded from view by curtains — ran through Maryland on Wednesday, taking advantage of turnovers and a barren first half in a game as ugly as any of Turgeon’s tenure.

“I love my team,” Turgeon said. “We just stunk tonight. And I stunk.”