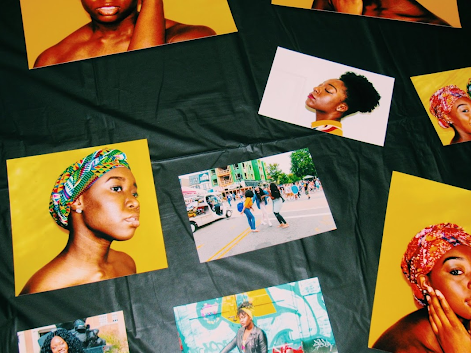 University of Maryland students hailing from as close as Baltimore and Washington D.C., and as far as Nigeria and Ghana, gathered in Stamp on Friday to acknowledge the contributions of various cultures of the black diaspora from Africa.

“Our organization mainly focuses on African communities, but this time we wanted to broaden the spectrum,” said ASPAC co-vice president Karsten Dankyi, a junior neurobiology and physiology major. “We wanted to do Africans, African Americans, Afro-Latinos. Just something that everyone could come and share and learn something in the process.”

The first half of the Expo featured five students showcasing their photography, painting, a cosmetic line and a clothing brand.

For Kamara, her business is more than just makeup. It’s also meant to empower and represent both the black community and the queer community.

“I saw that there wasn’t a lot of inclusion in beauty. Beauty doesn’t really include a lot of dark-skinned people of color and it also [doesn’t] include a lot of LGBT members,” she said. “[I hope] people who are [for example] a black gay man or a Latina non-binary person can go on the internet and see people that look like them in makeup so they can have the pride to go out in makeup every day.”

Nnabue, a freshman economics and government and politics major, adds a “90s vibe” to his photographs and enjoys shooting candid and close-up shots of his subjects. Massalee, a sophomore individual studies major, specializes in portrait photography that captures “black beauty, especially at times where black people aren’t given the space to actually showcase their work and show their beauty through pictures.”

The second half of the Expo featured live performances and a DJ, who played everything from popular R&B to energetic African beats and modern rap.

An all-female dance crew emphasized the importance of black female empowerment and confidence as they danced to “Run the World (Girls)” by Beyonce. Later, student models strutted down the runway to Jay-Z’s “The Story of O.J.” while wearing traditional African attire.

“It was a collaborative effort to look for different performers,” said ASPAC secretary Olaedo Onuh, a senior public health science major. “We looked at different groups on campus that fell in the umbrella of blackness so to speak.”

Some students, like junior public health major Chinedu Nwabuisi, attended to learn more about their own culture while exploring ones they’re less familiar with.

“I thought I’d come out and support my fellow African brothers and sisters and just learn a little bit more about where I come from,” Nwabuisi said. “I’m the son of a Nigerian father and Trinidadian mother.”

Other performances included a storytelling segment identifying the differences between the mummification process of blacks and whites, a solo a cappella performance and a motivational spoken words act. The night came to an end with another fashion show, as models cat-walked in all-black outfits.

Lola Ojaomo, a freshman international business major, enjoyed the vocal performances the most.

“I really liked the a cappella performances just because they did a lot of African music and some blends,” she said. “I identify with that a lot and I really enjoyed that.”

Ojaomo said the event was educational and focused on unity, support and love, which can sometimes be lost in such a diverse community.

“Recently, there’s been some division between African Americans and African children of immigrant parents,” she said. “We all are black, and we all need support.”