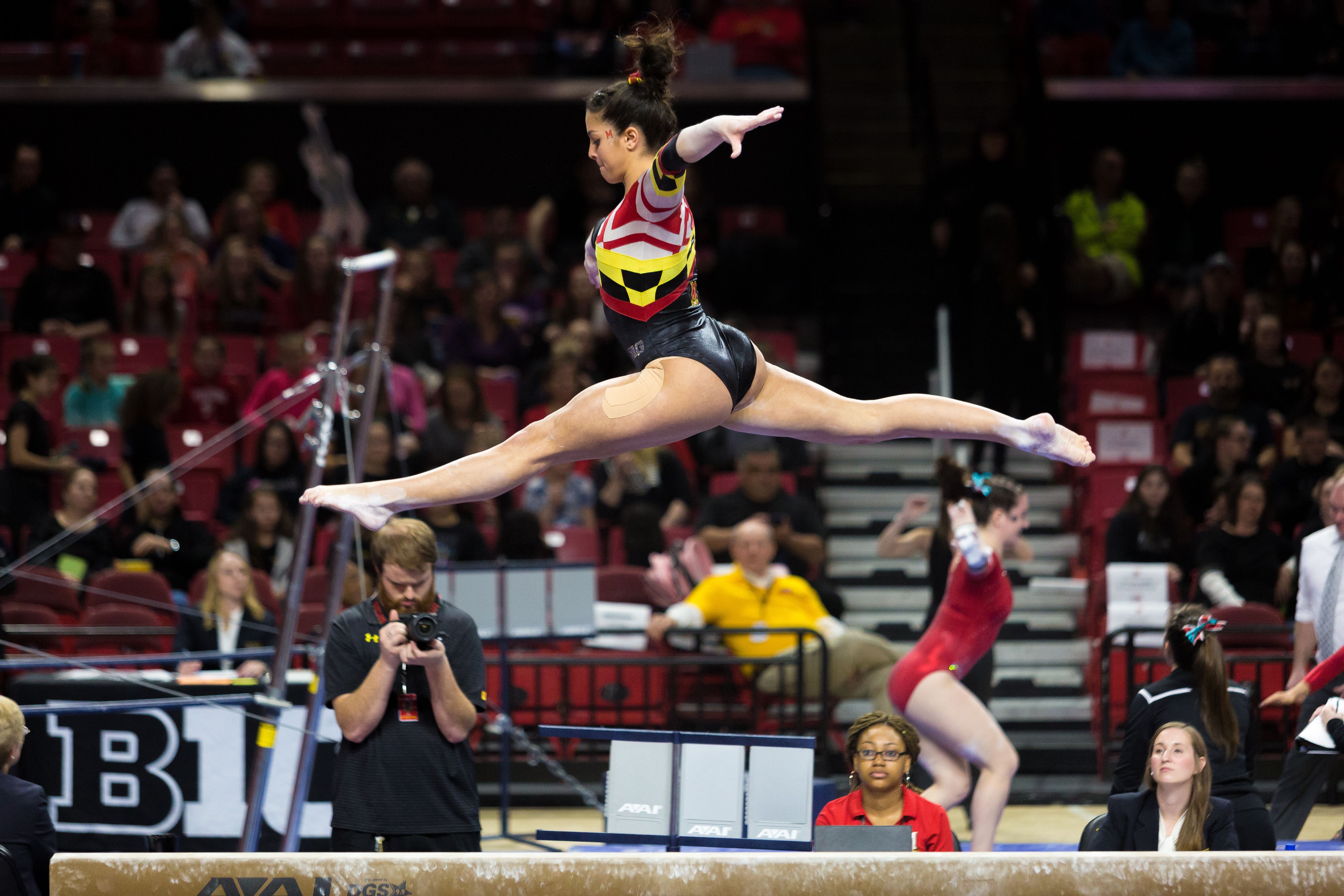 After finishing its beam routine, Maryland gymnastics — the first team at the Big Five Meet to complete its four events — anxiously waited to see where it would finish.

The Terps had been tied for first entering beam, but with a 48.6 in the event, there was uncertainty about how the meet would end.

The score wasn’t enough to keep them in contention for the lead, though, and Maryland dropped to fourth place with a 195.5.

The Terps took on No. 15 Nebraska, No. 24 Penn State, Iowa, and Michigan State in Toledo, Ohio. They claimed victory over only the Spartans.

“Although we never really found our groove,” coach Brett Nelligan said. “They did a great job and put out a solid score.”

Despite the finish, it was another promising effort. The Terps posted their second highest score of the season and continued to build on consistent displays in the last few weeks, breaking 195 in their fourth consecutive meet.

The Terps were bolstered by strong performances by the sophomore trio of Audrey Barber, Collea Burgess and Emilie LeBlanc. LeBlanc and Burgess earned 9.8s in two events each, while Barber scored 9.8s in three. Their impressive performances helped the Terps overcome two falls as they matched their second-highest score in any Big Five Meet.

Maryland’s performance on Friday was categorically consistent, with the Terps scoring at least a 48.925 in three events. However, Maryland eclipsed its season high on vault, with three gymnasts scoring 9.8s in the event for the third time this year. Burgess led the way with a 9.825, a new season high for her, while Barber added a 9.8.

Meanwhile, Farina competed in her home state for the first time in her career, an exciting experience for the junior.

“It was really exciting to have a lot of my friends and family being able to come,” Farina said. “Knowing that, it was … more exciting to go out there and … try to do my best for the team, myself, and everybody who came to support me.”

Farina, buoyed by the support from her family and friends, scored a 9.8 on vault, matching her second-best score on the apparatus this season.

Maryland’s performance on Friday — its third score of at least 195 away from Xfinity Center — means the team will open with a 194.98 regional qualifying score, ranking No. 32 in the nation. However, Maryland must maintain its focus to boost its scores and remain in the top 36 over the course of the season.

“We’re going to get back in the gym and work on the little things,” Barber said. “Get those tenths back that we’ve been giving up.”

Despite a solid score, the Terps had a few wobbles during their meet. With the Terps still putting up a 195.5, the team is confident and excited by the team’s prospects midway through the season.

“For us to score a 195.5 on what I would consider an off day,” Nelligan said. “That means that when we’re smooth and we hit clean, we can really break over that 196 mark.”