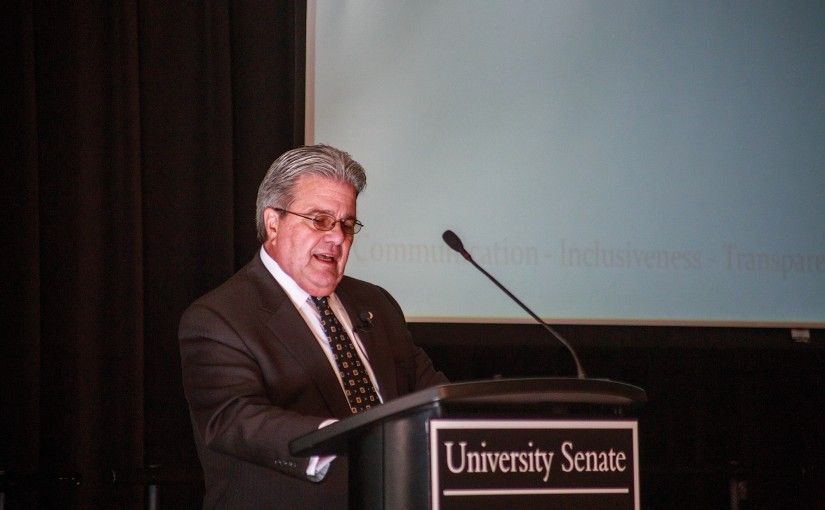 Most University System of Maryland workers can’t directly negotiate with the body that determines how much workers can expect to get paid and writes the rules of their sick leave — but a recently introduced state bill could change that.

Under current state law, the union that represents workers on nine of the system’s 11 campuses — the American Federation of State, County and Municipal Employees — must work out 15 different contracts between each established group of bargainers and their respective university rather than engaging the Board of Regents, which sets wage and personnel policy for the system’s member institutions.

A piece of legislation introduced to the Maryland General Assembly earlier this month would allow AFSCME to negotiate directly with the Board of Regents’ chancellor.

The bill, which is being sponsored by Del. Ben Barnes (D-Prince George’s and Anne Arundel) in the House and Sen. Benjamin Kramer (D-Montgomery) in the Senate, would significantly reduce the number of contracts needed to be worked out by remodeling the bargaining system now in place and make it more efficient.

If passed, the bill would install a system similar to the one in place for other state employees, who directly negotiate contracts every three years with the people who make policy decisions that affect them. This diverse group of workers — in agencies ranging from the State Highway Administration to hospitals — also bargain for higher wages each year with the same stakeholders.

Sam Luebke, deputy director for AFSCME Council 3, described the current bargaining system as a relic from before 2001, when no employees working in higher education had collective bargaining rights. He said this system has led to stagnant wages and resources wasted through needlessly complicated negotiations.

“We just have a system that’s archaic and broken and awkward and weird,” he said. “The only people who are really invested in the system are the outside lawyers who are making tons and tons of money over and over again negotiating these union contracts.”

While system spokesperson Mike Lurie wrote in an email that wages are discussed in each contract negotiation, Luebke pointed out that AFSCME Council 3 doesn’t have a bargaining relationship with the Board of Regents, which sets pay ranges for exempt and nonexempt employees — employees that don’t make overtime and those that do, respectively.

Luebke added, when union representatives tried to breach the subject of money with this university while negotiating a new contract last year, they were shot down and told the administration has no control over their members’ paychecks.

A university spokesperson declined to comment on Luebke’s allegation.

Under the current system, which bars AFSCME from negotiating worker pay ranges with the Board of Regents, paychecks have languished for the past few years, Luebke said.

Despite receiving a 2 percent cost-of-living adjustment in January, about half of this university’s exempt employees haven’t received merit increases since 2016, Luebke said. And paychecks are low across the board at this university for AFSCME members, he added.

More than 70 percent of AFSCME Council 3’s members earn below the living wage for one adult and one child in Prince George’s County, they said — $31.36 an hour, according to the MIT Living Wage Calculator. As a result, some members rely on food stamps and other forms of public assistance, said Marc Seiden, an organizer for AFSCME Council 3.

“They’re state employees, they’re being paid by tax dollars,” he said. “It’s like double-dipping to have to also collect from taxes for public assistance because they’re not paid a living wage.”

The bill introduced to the state legislature would benefit the Board of Regents as well as AFSCME Council 3, Kramer said.

“It seems to me that it would help streamline the process for them as well,” he said.

The legislation received its first hearing in the House Appropriations Committee on Feb. 26 and in the Senate Finance Committee on March 7.

CORRECTION: Due to an editing error, a previous version of this story incorrectly stated that the Board of Regents determines wages for workers in the system. The regents determine pay ranges for these workers. This story has been updated.