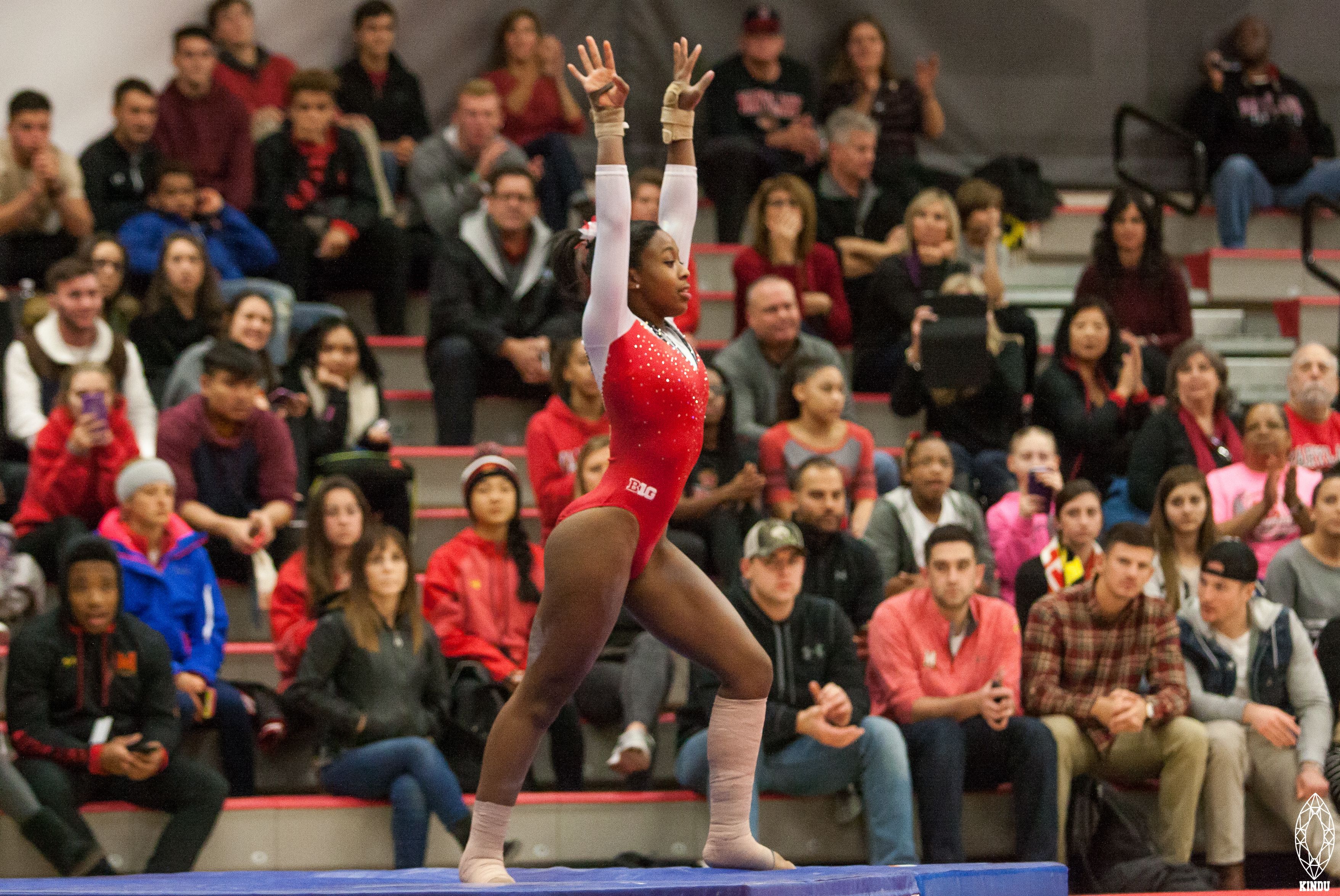 Sophomore Alex Robinson sticks a landing during her floor routine in Maryland’s Red vs. Black matchup on Dec. 9, 2016 at the Xfinity Center. (Marquise McKine/The Diamondback)

With one rotation left to go, the Maryland gymnastics team was in striking distance of besting the team’s highest ever score in the Big Five Meet.

Entering beam, the Terps had put together strong outings in floor, vault and bars, locked with Nebraska for first place.

However, the Terps were only able to put up two 9.8s on beam, settling for a 195.5 and fourth place at the Big Five Meet. Still, there were positives to be taken away while competing on podium.

“[We got] up there on podium, showed off our routines, [and] were calm and confident,” sophomore Emilie LeBlanc said. “It really boosts our confidence for the rest of the season.”

After a solid team display in their defeat to No. 14 Minnesota last week, the Terps hoped to keep their 195 streak alive on Friday as they took on the No. 15 Cornhuskers, No. 24 Penn State, Iowa and Michigan State in the annual meet, attempting to best their score of 195.7 from last year.

The Terps started out on floor, hoping to put up another solid score after earning a 48.925 last Friday. Despite suffering an early fall, the Terps recovered, matching their score against Minnesota. Sophomores Audrey Barber and Collea Burgess impressed once again, posting 9.8 and 9.85 scores, respectively.

“Performing on podium was really exciting,” Barber said. “I was more confident when I was performing.”

Meanwhile, senior Alex Robinson continued her resurgence, setting a new career-high on floor with a 9.825 score.

Maryland moved to vault, putting up a new season-high score on the apparatus. With five gymnasts earning at least a 9.775, the Terps enjoyed their most complete team performance in the event this season.

Burgess led the way for the Terps, earning a 9.825, while Barber put up another 9.8, her third on vault this season, paving the way to her second-place finish in the all-around. Junior Alecia Farina dazzled in her home state, scoring a 9.8 as Maryland finished just short of the vaunted 49, scoring a 48.975.

Next came bars, an event that Maryland has consistently excelled in this season. The Terps, ranked No. 18 in the event, hoped to build off of their success from last weekend, where they posted a season-best 49.25 in the event.

While they finished short of their score from last weekend, Maryland reached 49 for the third consecutive meet. LeBlanc’s red-hot displays continued, earning a 9.85. LeBlanc has broken the 9.8-mark in all but one of her meets this season.

Barber followed suit, posting a 9.825, while junior Kirsten Peterman celebrated her birthday by putting up yet another 9.8, her third straight meet with a 9.8.

After earning a 48.4 on beam last weekend — the team’s lowest score in the event since Jan. 26 — the Terps improved on their score on Friday, earning a 48.6. LeBlanc broke 9.8 on beam for the third consecutive meet, this time scoring a 9.825. Additionally, junior Tiara Wright earned a 9.8 after returning from an illness that held her out of last week’s competition.

“She brought a lot of confidence to both beam and bars,” Nelligan said. “It was good to see her return to her form right away and also her scores were great today.”

While the Terps were unable to secure a victory, they notched their second highest team score of the season, and are looking to build on the solid display as they progress toward the end of the season.

“We’re ready and tonight proves that,” Nelligan said. “Tons of pressure, tough environment, on podium, and they handled themselves really well … and that shows us that we’re ready for the next couple weeks.”