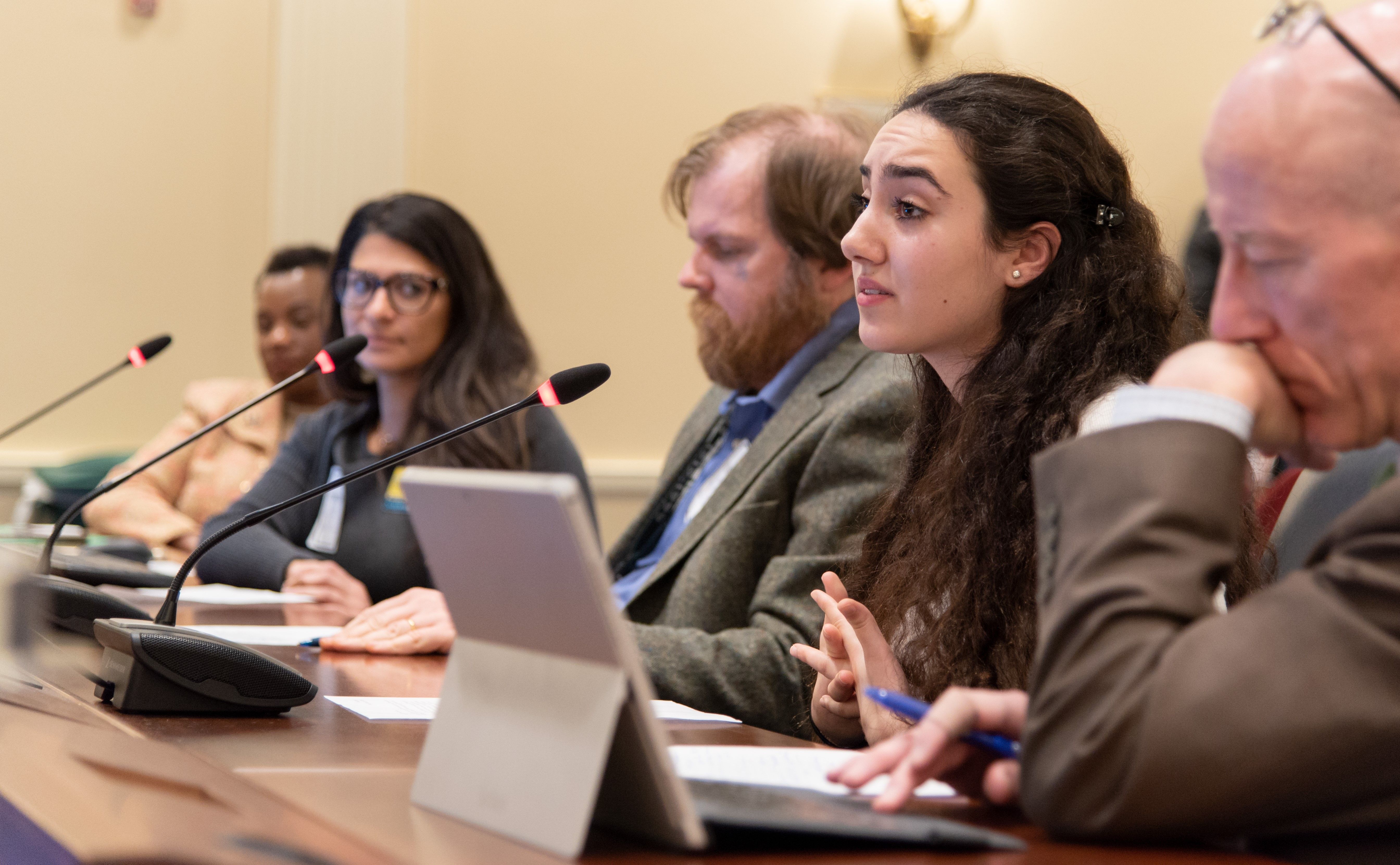 Shani Kamberi, a junior chemistry major, testifies before the Maryland House of Delegates Ways and Means committee on Thursday Feb. 21, 2019. Kamberi wrote a bill that would mandate organ and tissue donation education in Maryland public schools for the 2020-21 school year. (Photo by Matthew McDonald/For The Diamondback)

A University of Maryland student returned to the Maryland House of Delegates for the second straight year on Thursday to advocate for a bill she wrote that would mandate instruction on organ and tissue donation in Maryland public high schools.

Shani Kamberi, a junior chemistry major at this university, introduced a similar bill in the 2018 session. Last year’s bill passed the House with an overwhelming majority but died in committee in the Maryland Senate. Last year, some legislators were worried about mandating county boards of education to teach specific things, Kamberi said.

“Legislators don’t like it when you mandate for local school boards to do something,” she said. “Mandated language is not a friend.”

The new bill, HB 0567, is largely the same as last year’s. The biggest change was incorporating a transition period, which members of the House recommended in the last session, Kamberi said.

During the 2019-20 school year, public schools would be “encouraged” but not required to “provide age-appropriate instruction on organ and tissue donation and registration” in grades nine through 12, according to the bill. The full mandate would take effect for the 2020-21 school term.

The legislation is sponsored by Del. Pamela Queen (D-Montgomery), who also sponsored the 2018 version. It has 14 co-sponsors, including House Speaker Michael Busch (D-Anne Arundel).

Kamberi decided to write the bill after her high school English teacher, Jonathan Bos, received a heart transplant that saved his life. Every semester, Bos tells a new batch of students his “heart story,” which he shared with the committee members at Thursday’s hearing.

“It kind of amazes me that young people make such a momentous decision with very little information to go on,” he said. “I think so many people just bypass it because it’s not really on their radar.”

Bos said he understands there may be some hesitation to dictate to teachers what they must teach.

“I think that would probably be the major objection to this bill,” Bos said. “I can tell you as a teacher there is room in the curriculum for a one-day presentation on organ donation.”

Allan Massie, a professor of surgery at Johns Hopkins School of Medicine, testified in favor of the bill. He stressed the importance of starting a conversation about organ donation early with teenagers. He pointed to his two high school-age children who were able to make informed decisions on becoming organ donors, something other high schoolers might not have.

“Thanks to my work, they were knowledgeable about donation, and they were able to make a decision that is right for our family, however, most families are unprepared,” Massie said. “One day, my children might be asked about donating the organs of a loved one. That loved one might be me.”

“Hundreds of Marylanders face this decision every year, often in a moment of crisis,” he continued. “This decision is easier if they’ve discussed it in advance and considered it with their families.”

There are about 3,500 Marylanders on the organ and tissue transplant waiting list and 114,000 nationally, according to Jim Ford, Executive Director of Donate Life Maryland, who testified in favor of the bill. Donate Life is a nonprofit that registers organ and tissue donors.

Sen. Shirley Nathan-Pulliam (D-Baltimore County) is sponsoring a corresponding bill, SB 0954, that’s been cross-filed in the Senate. It does not currently have any co-sponsors.

The legislation is still in the early stages of the legislative process. It must pass out of the House committee and the full chamber, be reconciled with the Senate version and voted on by both chambers before heading to Gov. Larry Hogan’s desk.

Kamberi remains confident this version of the bill will turn out better than the first.

“Now that I’ve [gone] through this entire process once before, I feel like I know a lot more,” Kamberi said. “I have so much support.”