With JUUL use climbing, MD lawmakers want to raise the minimum tobacco age 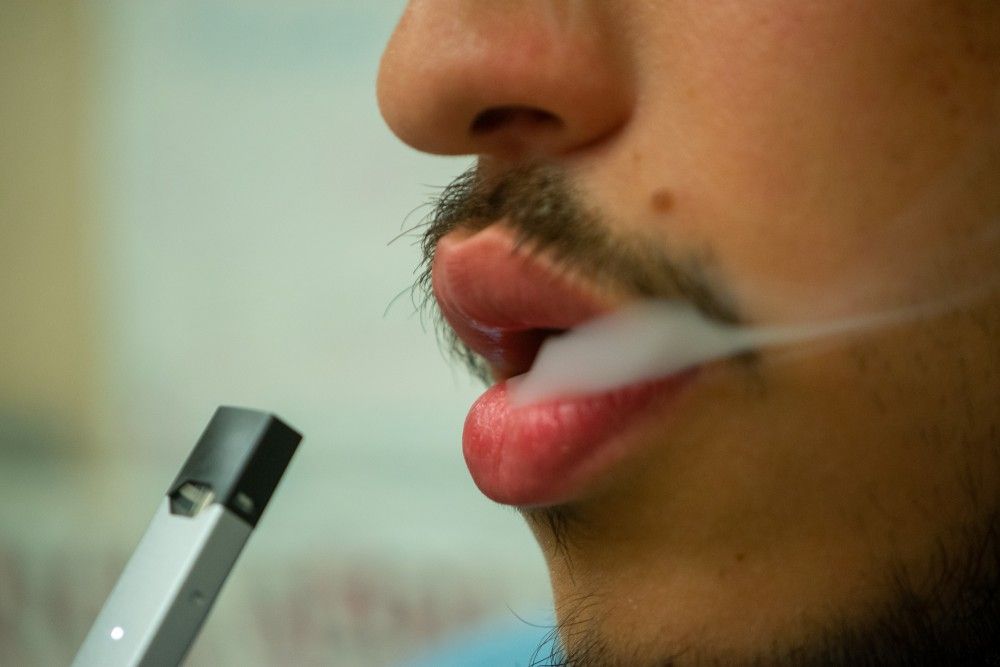 A student uses a Juul. (Elliot Scarangello / The Diamondback)

For 30 years, any Marylander over the age of 18 could buy tobacco or tobacco products. State lawmakers want that to change this year.

A handful of legislators, including six delegates and one senator, introduced bills Feb. 8 to raise the minimum age to buy tobacco products — including e-cigarettes, such as JUULs — to 21.

The bill would further restrict retailers, requiring that they post a sign in a visible location detailing no sales to anyone under the age of 21.

In a Jan. 29 joint press conference, House of Delegates Speaker Michael Busch and Senate President Mike Miller said that new tobacco legislation would be a key priority for the 2019 legislative session.

“We will make sure that young individuals cannot buy cigarettes or tobacco products until they are 21,” Busch said, adding that the legislation had been agreed upon by leadership on both sides of the Maryland General Assembly.

Similar bills have surfaced in the last few years but have failed due to inaction or disagreements on the legislative floor and were subsequently withdrawn.

If passed, the legislation could be effective in reducing underage and youth smoking, particularly in high schools, said Pamela Clark, a research professor in the department of behavioral and community health at this university’s public health school.

Clark said it’s easier for merchants, who don’t always ask for identification, to tell if someone is 21 because of their older appearance, which may further deter potential buyers younger than 18. Smokers under age 21 are more likely to become addicted, she said.

“Ninety-eight percent of all adult smokers start before 21,” Clark said. “The younger you start, the more addicted you become. Nicotine changes their brain.”

“If you want to smoke, you’re going to find a way to do it, whether that’s taking from your parent’s stash or finding someone who will buy it for you,” she said. “It’s already very expensive to buy cigarettes, so that’s limiting how many people have access to it, and you already have to show ID.”

The law would have likely have little impact on this university’s campus, as it went smoke-free in 2013. But Maryland would join six other states — California, Massachusetts, Oregon, Hawaii, Maine and New Jersey — in combating a large increase in youth smoking, which is partially due to the popularity of e-cigarettes.

Middle and high school students using e-cigarettes rose from 2.1 million in 2017 to 3.6 million in 2018, according to a report from the Centers for Disease Control and Prevention.

One of the most popular e-cigarette brands, JUUL, is especially popular among younger people, Clark said.

“[JUULs] have moved down to middle school,” she said, “mostly because they don’t feel harsh going down after a hit, are small and slim like a flash drive, and their flavors … can be addicting.”

“You know those drawers your teachers kept confiscated items in?” she said. “Now it’s a desk full of JUULs.”

While JUULs, like most e-cigarettes, were created in part to wean smokers off cigarettes and traditional tobacco products, the Food and Drug Administration has criticized the company for its marketing to youth, many of whom have picked it up without smoking anything else.

Madelyn Harris, a freshman African-American studies and sociology major, said the popularity of e-cigarettes could be endangering youth and raising the age to 21 could be one way to stop the youth-targeted advertising.

“They’re becoming more and more available to high school students and younger teens,” she said. “The only way we can stop it is if we can crack down on people who are selling and marketing it to teens.”

The bill covers all tobacco products, and the law would apply to vape stores and all e-cigarette manufacturers, which would have to apply the new age requirements and warning signs online as well as in traditional brick-and-mortar stores.

If passed, the bill would take effect Oct. 1.

One opponent of the bill is concerned about the effects a sudden change in the law may have on current smokers. The current law has been in place since 1989 when the minimum age to buy tobacco was raised from 16 to 18.

Unless the bill is grandfathered in to allow those who are currently between the ages 18 of and 20 to continue smoking, which is not in the proposed drafts of the bill, it could cause withdrawal, said Sydney Heise, the president for Students for Sensible Drug Policy, an organization at this university. SSDP advocates for abolishing arrests and incarcerations for drug possession.

“There’s a potential problem if you’re an 18-year-old and currently smoking cigarettes, and suddenly [you] can no longer purchase cigarettes because of this bill,” she said. “Of course it’s going to create an involuntary nicotine withdrawal.”