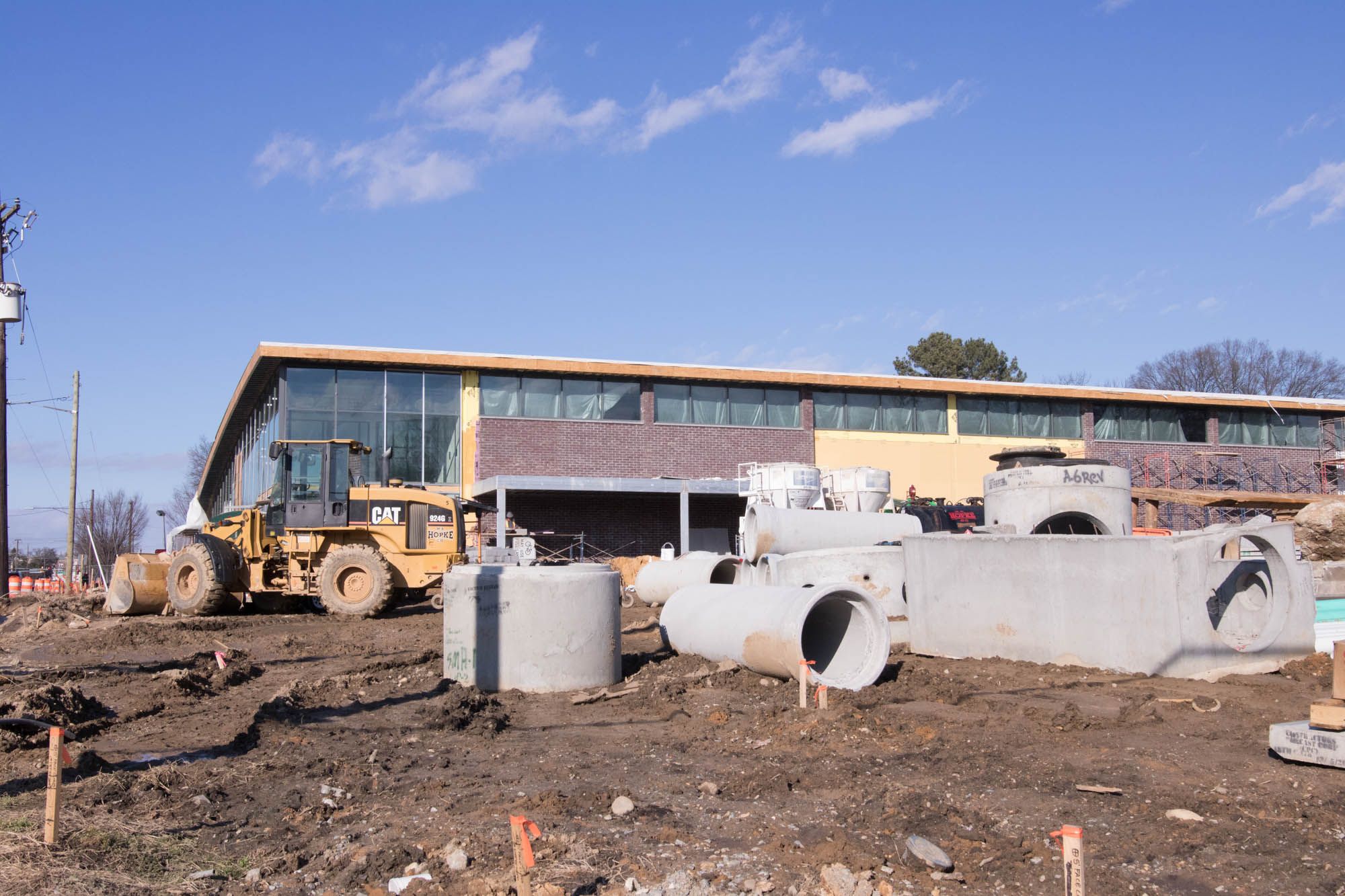 The site of the incoming LIDL grocery store on 2/13/2019. The grocery store will be located at 8601 Baltimore Ave. (Richard Moglen/The Diamondback)

Lidl, a German grocery store chain, is set to open its second Maryland location on Route 1 in the next few months.

Similar to Aldi, an international discount grocery story with locations in College Park and Hyattsville, Lidl will offer affordable grocery prices to an area where most residents get their food at stores like Whole Foods, Target Express and CVS.

“It will provide … walkable access to healthy food for many people who live in College Park, including the students who live nearby in student housing,” Mayor Patrick Wojahn said. “I think it will be an exciting addition to College Park, and I’m looking forward to having them open.”

Construction on the facility began earlier in 2019 on the site of the former Clarion Inn, which closed in January 2018. The store is expected to open in June at the latest, but will hopefully open sooner, said Ryan Chelton, College Park’s economic development coordinator.

“It seems very fast,” Chelton said. “But based on how fast they’re going through their construction process … if anybody is going to be open that early, I guess it might be them.”

[Read more: College Park won’t be a food desert forever — a grocery store will open in 1 to 2 years]

Lidl, which opened its first store in 1973 outside Frankfurt, Germany, currently runs 10,500 locations in 29 countries worldwide. About 80 of these stores were opened in 2018.

This year, the grocery chain — which operates out of the U.S. in Arlington, Virginia — plans to expand to Long Island and New York City, among other East Coast regions.

Lidl spokesperson Chandler Ebeier said the company is “looking forward to bringing [their] unique experience to more communities along the East Coast.” She said the store’s “high-quality products” and “incredible everyday prices” will make Lidl “an easy choice for customers.”

In College Park in particular, the new location could help resolve some decade-long affordability and grocery issues.

In 2015, the USDA Food Access Research Atlas, which aggregates information on food availability for low-income residents, classified College Park as a food desert — an area where affordable food options and fresh produce are hard to find.

While the atlas hasn’t been updated in four years, a “significant number” of College Park residents were more than either one or 10 miles from the nearest supermarket as of 2015.

Shelly Ver Ploeg, chief of the the USDA’s food assistance branch, said her team plans to update the atlas with a new list of stores by 2020. But even so, she noted that students should “be a little skeptical” about its findings, since it’s informed by census data that’s difficult to pinpoint.

“I’ve talked to people at census and places like college campuses are really tough to get data on,” Ver Ploeg said. “There’s people living in very close quarters, also only there for part of the year.”

Many students have meal plans, few have cars, and many classify as low-income although their parents may not, Ver Ploeg added. This makes accurate data hard to accumulate.

And the report shows significant improvements in grocery store availability from 2010 to 2015. In the years since, Target Express and Whole Foods have also set up shop along Route 1.

Still, grocery shopping options are limited, especially for those who do not own a car. This is a reality that Maura McGraw recognizes.

“If I didn’t have a car [on campus], it would be a lot harder to go buy food,” the senior animal science major said.

If Lidl’s inventory looks anything like the Aldi’s in Hyattsville, McGraw said she’ll be sticking to picking up her food at the spots she has now.

“There was nothing there,” McGraw said. “It didn’t look nice at all.”