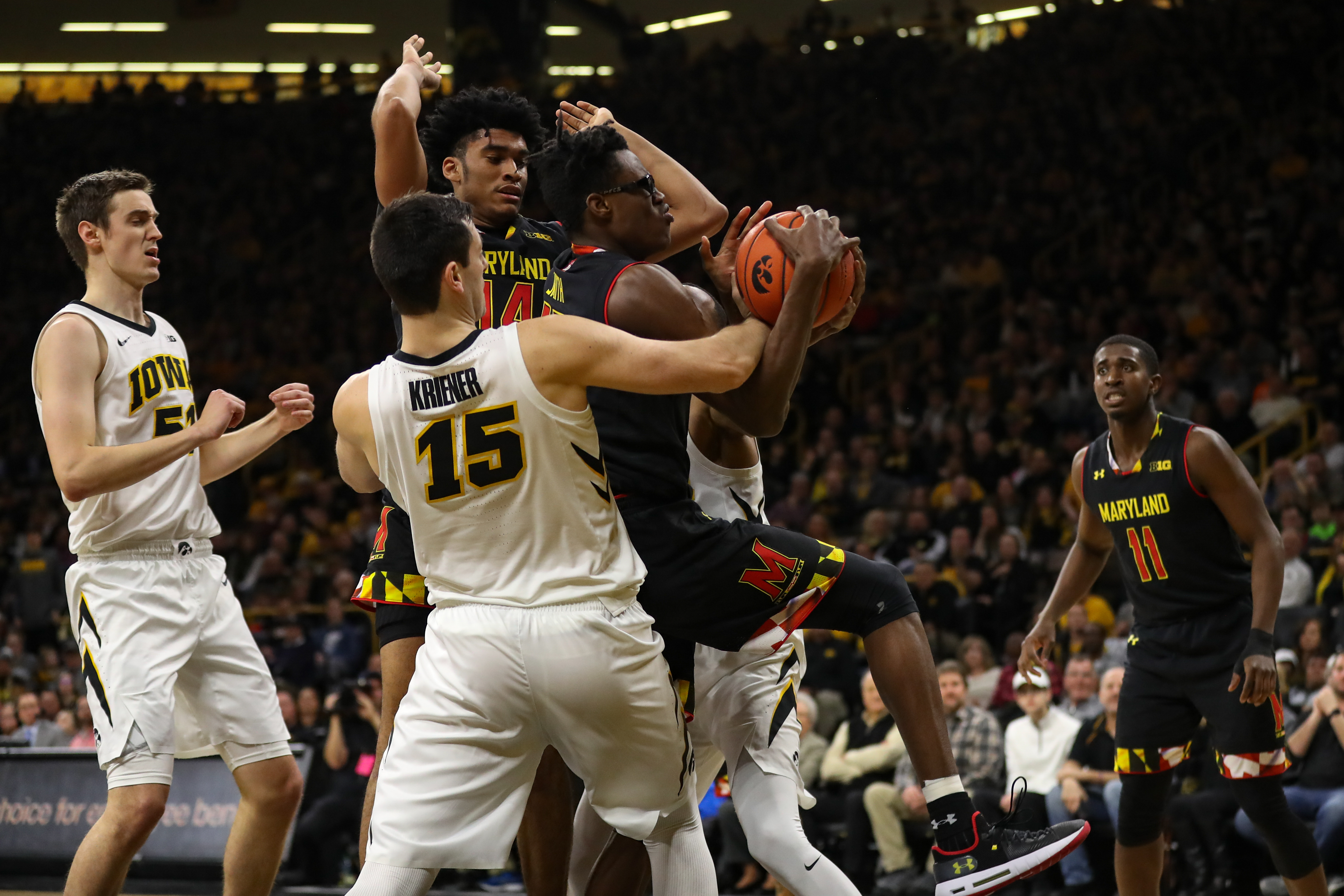 Forward Jalen Smith fights for a rebound during No. 24 Maryland's 66-65 win over No. 21 Iowa at Carver-Hawkeye Arena on Feb. 19, 2019. (Courtesy of David Harmantas/The Daily Iowan)

Out of coach Mark Turgeon’s huddle with 13 seconds remaining in a one-point game, Maryland men’s basketball put the ball in Anthony Cowan’s hands.

The Terps had held a 12-point lead at one point in the half and a seven-point advantage minutes earlier, but a late 8-0 Iowa run — the type of collapse that helped keep Maryland without a road win over a ranked opponent for 11 years — suddenly pitted Turgeon’s squad in a tight finish.

Down one in the final seconds, Cowan had earned the chance to drive the lane with the game on the line, finally breaking out from an offensive slump over the past five contests with a game-high 17 points. His runner rimmed out, but forward Bruno Fernando was there for the vital tip-in.

Fernando’s second field goal of the game secured Turgeon’s first road win over a ranked opponent since coming to College Park, pushing the No. 24 Terps past the No. 21 Hawkeyes, 66-65.

“We made a lot of big plays,” Turgeon said. “And you have to, to beat a really good team on the road.”

Though the Terps opened without a field goal for almost seven minutes, Iowa couldn’t build a lead the way Michigan did Saturday against Maryland, even as Turgeon’s side turned the ball over on three straight possessions early.

Forward Ricky Lindo slammed it home with 13:20 remaining in the half, ending an 0-for-8 start. Iowa, though, was 4-for-14 at that point and and shot just 2-for-10 from deep in the opening frame, failing to take advantage of giveaways.

“Both teams were a little sluggish,” Turgeon said. “Iowa missed about seven wide-open threes for us. Just in-and-out. Could’ve been a 10-point game, their lead, at halftime.”

Facing a full-court press after the under-12 media timeout, Lindo threw the inbounds right out of play, leaving Turgeon bickering on the bench. Shortly after, Lindo and guard Serrel Smith collided trying to grasp a rebound, allowing forward Ryan Kriener to pick up the loose ball and lay it in — one of Iowa’s nine offensive boards in the first.

But when Fernando headed to the bench with his second foul with eight minutes to go, Maryland began hitting from range, exploiting Iowa’s 2-3 zone with inside-out action. Guard Aaron Wiggins hit a corner three with 7:25 to play, and over the next two minutes the Terps hit three more — including two from Cowan, part of his 11 first-half points.

And as Iowa went scoreless for the final 4:15 of the first period, Maryland built a 27-23 edge, an advantage that seemed nearly impossible after it had just seven points at the 10-minute mark. The Terps backcourt helped overcome Fernando and forward Jalen Smith’s foul trouble, in which they combined for two points in 19 minutes.

“It was a struggle offensively,” Iowa coach Fran McCaffery said. “We didn’t make shots we normally make in the first half.”

When Smith picked up his third foul five minutes into the second half, Turgeon employed a four-guard lineup. With Fernando as the big man, Maryland pushed the pace, building a 12-point lead with a 7-0 run with 14 minutes remaining.

Even with Maryland’s frontcourt rotating frequently, Iowa’s leading scorer, forward Tyler Cook, was held in check with six points. Guard Jordan Bohannon hit just 2-for-11, struggling to find room with Cowan on him.

But with eight minutes to play, Bohannon rolled around Kriener’s screen at the top of the arc and pulled up from deep, cutting the Terps’ edge to five and capping an 8-2 run for the Hawkeyes. Turgeon called for a stoppage.

Wiggins then hit from range — part of his nine points — before Cowan knocked his fifth triple to push the lead back to 11.

That advantage would come crumbling down, through, once Baer capped an 8-0 Iowa run with a three to give the Hawkeyes a one-point lead.

“All of a sudden, we’re down,” Turgeon said. “It was crazy how fast we lost it.”

Fernando hit a pair of free throws before Bohannon reestablished Iowa’s lead with two freebies of his own. Then, with 13 seconds left Turgeon’s play put the ball in Cowan’s hands.

Cowan missed, but Fernando’s putback did the job, securing Maryland’s first road win over a ranked foe since 2008.

“I got some texts today saying, ‘Today you’re going to beat the streak,’” Turgeon said. “I had no idea what they were talking about. … That doesn’t mean anything to me. People talk. I don’t care.”