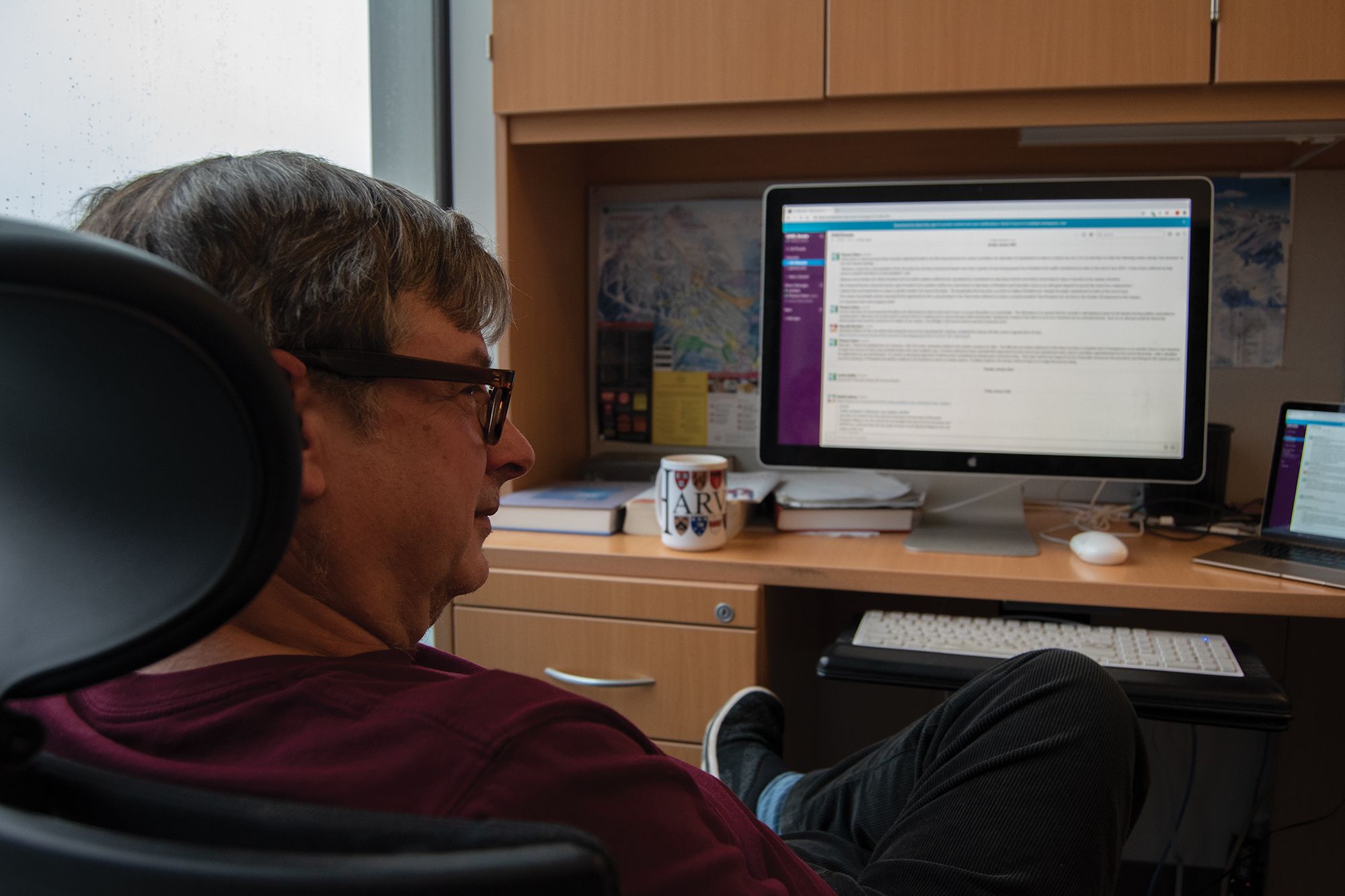 University Senator and physics professor Thomas Cohen sit at his desk with the messaging app Slack open on his computer. The University Senate is trying to use Slack to address small issues and questions so they can be more efficient during meetings. (Joe Ryan/The Diamondback)

After discussing University of Maryland Senate matters with his colleagues, physics professor Tom Cohen often thinks, “We ought to put this up on Slack and see what happens!”

But he said he knows what the result would be: nothing.

Though the body has been using the messaging platform since 2017 — the result of concerns that its committees weren’t communicating well between meetings — many members feel that a lack of engagement has prevented the app from improving communication or efficiency.

In the entire month of January, only four of the 182 main channel members contributed to discussion. And even during more high-traffic periods of last semester, such as November — shortly after university President Wallace Loh announced his retirement — just 19 members engaged in the channel.

The senate typically meets about nine times every year, which means they have about 20 hours of in-person discussion.

There were high hopes for how the platform might transform communication. In minutes from a meeting in fall 2016, the proposal to use the service said Slack could encourage members to “come to meetings prepared and engaged in the topics on the agenda so that meaningful discussion can take place.”

But so far, the main channel — in which senators are not required to participate — has become more of an echo chamber than a tool for discourse about important campus legislation, representatives said.

Some senators, like Sasha Kahn, have found themselves using the platform, but are frustrated with the lack of discourse.

“Older members do not understand it or are unwilling to use it,” said Kahn, a junior architecture and government and politics major. “This is not a unified effort where everyone is coming together and reading these bills on Slack.”

But Cohen said the lack of engagement doesn’t appear to be an issue of age.

“I’m ancient. Most of my colleagues who I know use it are roughy my age: over 60,” he said. “I would think people over 20 are more comfortable with this environment. As far as I can tell, that’s not the case.”

After witnessing how effective Slack had been for the Student Government Association, which Kahn was a legislator for, he saw the potential for how it could improve senate operations.

Kahn said the few times that bill text has been uploaded to Slack, it has been helpful in preparing for meetings and votes — but that its effectiveness has been limited due to the lack of participation.

Still, senators hope that the tool might be used to promote informed dialogue and consideration of legislation before the meetings. This could slow down the process by introducing more discussion, but that’s a welcome development for some.

“The more people have thought about issues beforehand, the more conversations will happen at the actual meeting,” said Cohen. “More people having honed arguments is good.”

Jordan Goodman, a physics professor who was the senate’s incoming chair when Slack was implemented, was inspired to bring the program to the body after it allowed him to message his colleagues around the world about gamma rays from high in the Mexican mountains.

Not only did the app allow him to stay in touch with his fellow scientists, it enabled him to check his work while his brain struggled to get enough oxygen at 13,500 feet.

In College Park, though, representatives have struggled to adapt to the platform — even though Goodman said the body was in need of a way to facilitate more direct communication when they weren’t on campus.

“The faculty don’t see each other frequently,” Goodman said. “People tend to commute in and leave. It’s hard to exchange ideas across departmental boundaries.”

Though the system might not be bringing the same clarity to senate discussions as it brought to Goodman’s work in the Mexican mountains, senators say even if it’s not used well, it’s still a positive tool to have available.

“I don’t know that it quite got to the point of revolutionizing, it but it definitely helped. And every little bit helps,” Goodman said.

Cohen agreed, adding that he didn’t think Slack had done enough to break down the barriers between representatives.

“I don’t think it has made much of a difference in the culture of the place,” he said.

Moving forward, he added, he’s unsure of the app’s future with the senate.

“It’ll either die away and become completely useless,” he said, “or over time become the normal mechanism through which conversations happen.”