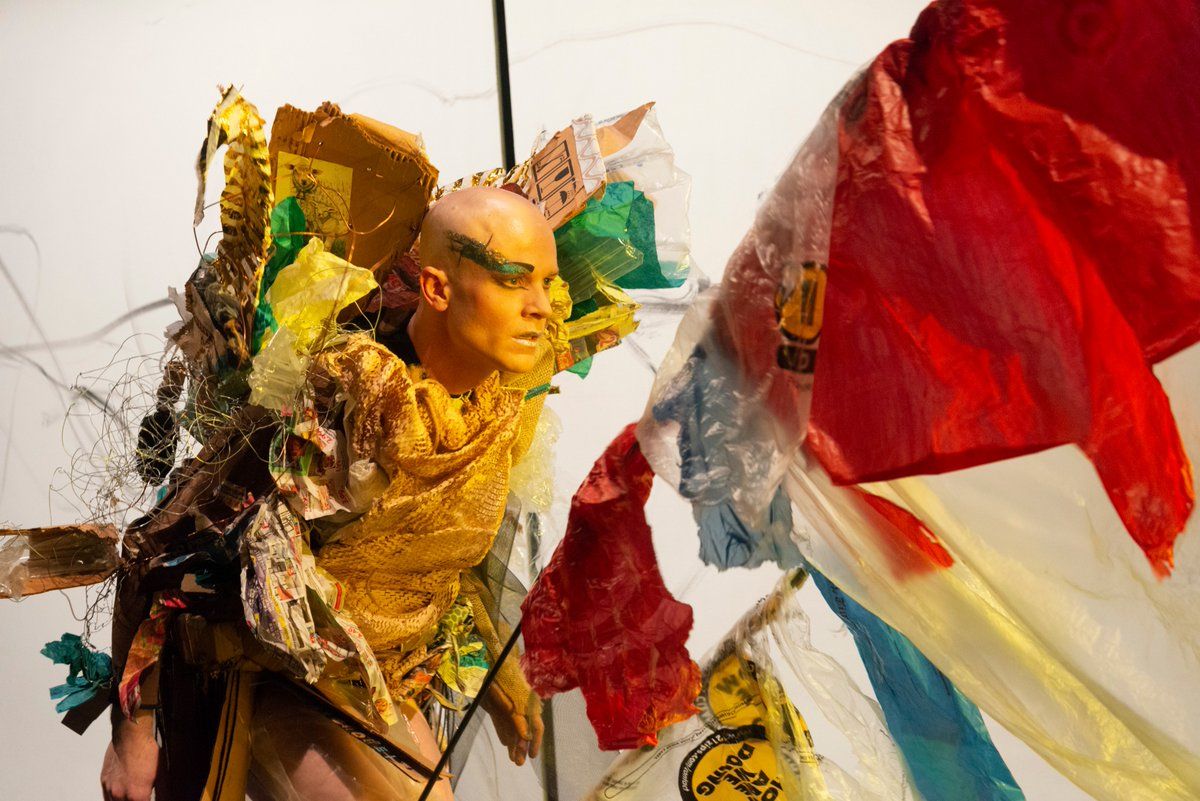 Ama Law and Shawn Stone, University of Maryland graduate students with masters in dance, present the most lively dances to grace The Clarice’s Kogod Theatre in some time with their thesis performances. While Stone’s set ‘s (apostrophe s) incorporates countless theatrical elements, Law’s physical and energetic movement in Tides absolutely lights up the stage.

Stone’s more interpretive choreography and concept is certainly engaging. As the audience enters the Kogod Theatre, ‘s (apostrophe s) dancers dressed in bright teal tracksuits and gray fanny packs surround them. The cast appears to be simultaneously warming up and jamming out to the pop-techno beats that blasted through the speakers. A giant pile of plastic garbage is in the middle of the stage, but the dancers move as if it is invisible. Suddenly, their dance party is cut short and they retreat upstage to sit in two lines of chairs.

The pile of trash begins to rustle with the slightest of movements. A figure emerges from the heap, as Stone is in fact hidden within it. His figure is absolutely dominated by his massive costume. He moves slowly, crawling and stepping as his trash-adorned attire makes him look larger than life. The dancers behind him pull out long strings of plastic bags from the theater walls.

Stone’s piece is marked by multiple mood changes, with times of intensity and laughter appearing throughout. The choreography for the majority of the piece is restricted to arm gestures that are repeated to match these changing moods. The dancers fully commit to these small movements.

When the choreography builds to become stronger and more physical, the dancers only become more energized. They never back down from Stone’s intense message about consciousness.

Stone’s creativity with staging is unmatched. He incorporates lighting, vocalization, costume design, projections, chalk and a variety of other props to make his vision come to life. His ability to use all of them together is impressive, but there are moments when the combination is a bit overwhelming.

The projections of 1950s-esque food advertisements or the dancers’ screams and yelps could feel out of place if the audience wanted to simply focus on the physical movement or overall message of ‘s (apostrophe s).

While Stone utilizes the above theatrical elements, Law focuses on the sheer physical power of her all-black female cast in Tides. Their moments in unison are absolutely mesmerizing as they hit every single accent in their music. Though the piece ends with jaw-dropping choreography that blends lively hip-hop, step and African styles, the beginning is much more peaceful and serene.

Before the piece begins, audience members are asked to take a seashell from a bucket and bury it in the sand on the stage. Tides honors the self and those that came before, so the seashell is meant to represent lost loved ones. The beginning choreography features a slow, calming canon of waving, swinging, and curving bodies. It begins to pick up after a series of step choreography. The power of the stomping on stage is intoxicating, and excites the cast of dancers just as much as it excites the audience.

One of the piece’s most iconic moments is a “fashion show,” where all the dancers strut across the stage from one wing to the other. They show off their costumes, dance talents and inspiring confidence. It feels impossible to sit in the audience and not have the overwhelming urge to scream and cheer in excitement for the dancers on stage. As they support each other, audience members do the same.

With multiple sold-out shows, it’s truly unfortunate that it’s impossible for every student to see Tides. It not only reminds audiences of Ama Law’s talent, but also of the power of women. The dance department will truly feel a loss after she completes her masters work. Her unique choreographic energy will be difficult to replace.