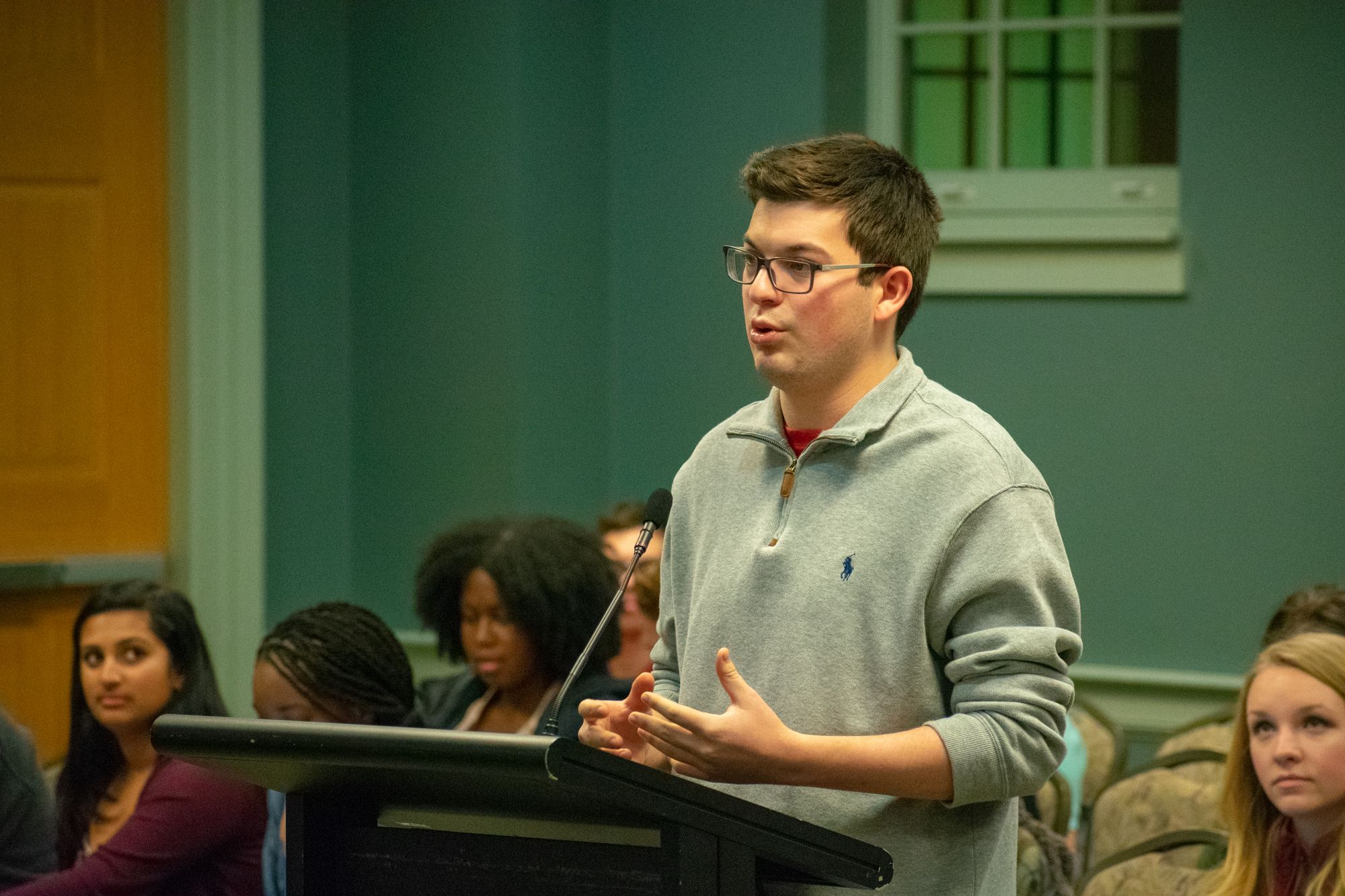 Dan Alpert, the SGA Student Fees Coordinator, speaks to the SGA about the relaunch of WTFUMD. (Elliot Scarangello/The Diamondback)

The University of Maryland’s SGA said Wednesday it plans to relaunch a program called WTFUMD to help students with everyday problems.

The program — which stands for What To Fix UMD — is a website that tracks student requests for help with issues they face, such as the price of textbooks, the academic calendar and policy changes they hope to see around the campus. Students can submit requests through Facebook, Instagram or Twitter with the hashtag #WTFUMD or through an online form. From there, the student group assigns a legislator to help the student find the appropriate channels to fix the changes

“It’s a great way for students to get more involved or have their voice heard, especially if they don’t know how to do that otherwise,” said Dan Alpert, who is leading the WTFUMD comeback.

While students may have concerns that they want addressed, many don’t know how to make the Student Government Association aware of them.

“One of the biggest issues our student body faces is not knowing where or when to voice our concerns, said Sean Swider, a sophomore criminology and criminal justice and psychology major. “If I had a problem that I needed addressed, I would feel much more comfortable using an online platform to ensure that my worries are heard.”

The initiative originally launched in 2013, but lost steam after a few semesters amid a lack of manpower and a time-consuming workload, said SGA President Jonathan Allen.

The SGA had planned to relaunch the program in the fall, but “every year things come up that can derail [the group’s] agenda” or project timelines, Allen wrote in a message. This year, it was the Board of Regents’ controversial recommendation that the school keep embattled football coach DJ Durkin.

Despite the sidetrack, the SGA has re-affirmed its commitment to the project, and is making some changes for a more successful run than its previous attempts: namely, dividing the work more evenly among legislators, amping up social media outreach and using the tracker, which displays a project’s completion status.

Before, the initiative had a dedicated team to process requests, but now the work will be spread among all legislators, said Allen, a senior government and politics major. The requests will be sent to the SGA legislator or director whose position best matches with the complaint, Alpert said.

“We continuously seek to improve how we operate in order to best represent students,” Allen wrote in a message. “Hopefully this brings in more voices into the fold.”

Allen said he was inspired to have the group bring the program back after checking social media and scrolling through student complaints about campus issues.

“I see a lot of concerns or ideas, but it’s kind of going into a void that isn’t necessarily being acted upon,” he said. “I wanted to be sure that we had a platform to capture those ideas and concerns, and then have members of [the] SGA actually act upon those ideas, and if they aren’t feasible, then explain why things are the way that they are.”

The initiative will officially re-launch Feb. 11 when the group begins taking requests. Students can already use the hashtag to make the request, but they won’t begin to be processed until that date.

Carlie Butz, a freshman enrolled in letters and sciences, said she felt the program is long overdue, and is eager for an efficient and direct way to communicate with the SGA.

“I think this program is a great way for the students who don’t hold any positions of power to be able to actually get a problem heard and possibly taken care of,” Butz said. “This kind of communication between students and administrators has been needed for a while.”