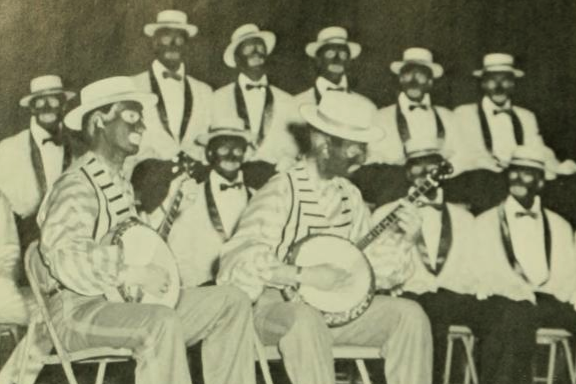 Images of people in blackface from old University of Maryland yearbooks were shared via Twitter on Thursday, garnering hundreds of retweets and a response from university President Wallace Loh.

“[W]ent on a mission at work to find blackface in old UMD yearbooks and it only took me 5 mins,” she wrote in the Tweet, which had been retweeted nearly 1,000 times as of Friday morning.

went on a mission at work to find blackface in old UMD yearbooks and it only took me 5 mins lol pic.twitter.com/BLQc8If7aw

The four pictures come from the 1960, 1965 and 1970 editions of the Terrapin Yearbook, which is available in online archives going back to 1897. One picture shows a man in dark body paint for a Maryland football win over Clemson. Another shows several women donning blackface for a “mock” minstrel show.

Alexander told The Diamondback it wasn’t the images themselves that surprised her, but the fact that they were so easily accessible.

“Somebody actually sat and scanned all these pictures and uploaded them online and was like, ‘Yeah, this is fine,’” she said. “I don’t think it’s appropriate.”

The tweet comes after multiple Virginia politicians were caught up in a scandal involving blackface, gaining national attention and sparking calls for their resignations.

Last week, a picture surfaced from Virginia Gov. Ralph Northam’s 1984 medical school yearbook, showing a man in blackface and another man in Ku Klux Klan robes. Northam initially apologized for appearing in the photo, then reversed course and denied being in it, but admitted to wearing blackface on another occasion.

After Northam’s yearbook pictures were revealed, Virginia Attorney General Mark Herring issued a statement apologizing for appearing in blackface in the 1980s, though no pictures of Herring have surfaced. Virginia Senate majority leader Tommy Norment also came under fire for having edited the 1968 Virginia Military Institute yearbook, which included numerous pictures of students in blackface, as well as racial slurs.

Alexander highlighted the killing of 2nd Lt. Richard Collins and the spate of hate bias incidents on the campus, which she said she hasn’t been impressed with Loh’s response to.

In May 2017, Collins, a black Bowie State University student, was fatally stabbed while waiting for an Uber on this university’s campus. Sean Urbanski, a white former student of this university who had ties to white supremacist groups, is set to stand trial later this year on murder and hate crime charges in Collins’ slaying.

Prior to the killing, a collection of hate bias incidents — including a noose found hanging in a fraternity house and white nationalist posters across the campus — had moved student activists to criticize the administration’s handling of diversity concerns.

And the trend has continued since then — there have been 21 reported hate bias incidents so far this academic year, and several have targeted people of color, according to the Office of Diversity and Inclusion’s online log.

So, when Loh tweeted in response to Alexander that the pictures of blackface were “profoundly hurtful and distressing,” and didn’t “convey what we seek to embody today,” she fired back with “BYE LMAO.”

Later, Alexander tagged Loh in a tweet that included screenshots of three news articles — one about Collins’ killing, one about the noose and one about racist writings found on the campus last year — as well as the flyer for “White Awake,” a Counseling Center support group that was billed as a “safe space” for white students to discuss race. After the flyer drew widespread criticism last semester, officials changed the group’s name and messaging.

Still, Alexander said she thinks Loh and the university need to be stronger in condemning hate on the campus.

“Obviously, [Loh’s] not going to be like, ‘Oh yeah, I take full responsibility for everything,’” she said, “but he just kind of made it seem like … ‘everything here is perfect now, there’s no racism.’”

CORRECTION: Due to a reporting error, a previous version of this article incorrectly stated pictures had surfaced of Tommy Norment in blackface. Norment edited a yearbook that contained photos of people in blackface, but no photos of him in blackface have surfaced. This article has been updated.