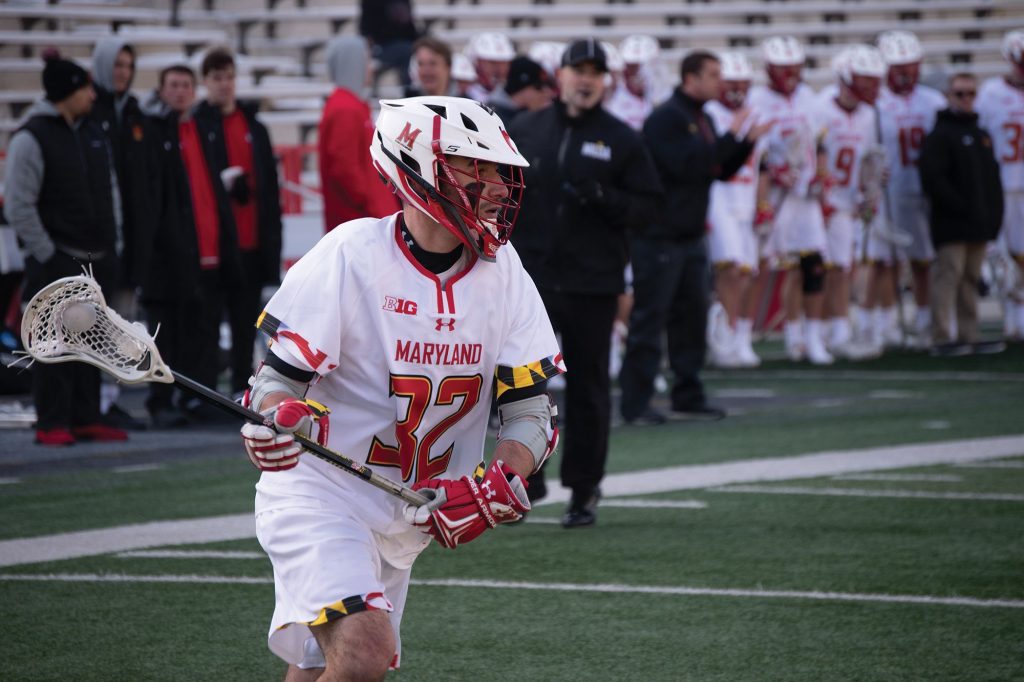 Midway through the first period against Bucknell on Saturday, Maryland men’s lacrosse midfielder Christian Zawadzki recovered the ball on a bounce and immediately fired a perimeter shot toward the net.

Once the ball found the back of the cage, a celebration ensued that was nearly four years in the making.

Zawadzki, the No. 16 overall recruit in the class of 2014, hadn’t scored since March 24, 2015 — his freshman season. He’d dealt with an array of injuries and fell behind a bevy of other talented midfielders in College Park.

On a roster that brings back three players who scored 25 goals in 2018, Zawadzki, a fifth-year senior making his first career start, was the surprise scorer of the Terps’ first goal of the 2019 season.

With the Bison focusing their defensive attention on attackman Jared Bernhardt, Maryland’s top returning scorer, Zawadzki set the tone for other players to step up and lead the team to victory in its season opener.

“For him to step in with that confidence, that’s kind of what we’re hoping for … when they put too much emphasis on some of our veteran guys,” coach John Tillman said. “I think we have a lot of other capable guys.”

Tillman lauded his team’s depth ahead of the season, and said that it could lend itself well to the tempo of the game with the new possession clock rules. That depth was on display Saturday, as Tillman used 23 of the 50 players on his roster against Bucknell.

While attackman Logan Wisnauskas led the Terps with four goals, his fellow stalwarts had a more muted impact. Bernhardt tallied two goals, both in the second half, and midfielder Bubba Fairman wasn’t able to find the net.

Without a heavy first-half influence from Bernhardt or Fairman, Tillman’s team needed scoring from elsewhere to overcome a glut of turnovers.

“The guys that maybe hadn’t been household names, they’ve been working really hard since August,” Tillman said. “We really felt like when they got the opportunity, they were going to make the most of it.”

Along with Zawadzki, the Terps got goals from midfielder Anthony DeMaio and attackman Louis Dubick, who scored a combined 11 times last season.

DeMaio was an active participant all over the field. The redshirt sophomore scored from the wing, found Wisnauskas in front of the net for a goal with the shot clock about to expire and hustled to recover a ground ball before scoring on a vacant net.

Dubick, the lone senior attackman on the roster, earned the starting nod alongside Bernhardt and Wisnauskas on the first attack line. He scored a goal, dished out an assist and took care of the ball, finishing without committing a turnover.

But Dubick’s importance extended beyond anything measured on the stat sheet.

“Louis took the reins,” Wisnauskas said. “He’s communicating to us. He’s making sure we know what [set] we’re in, what we’re doing [and] making sure we’re executing.”

Puglise made his presence felt in multiple phases, with three ground-ball recoveries and a goal on his only shot attempt — a slick backhand finish after taking it himself in a transition opportunity.

Depth proved pivotal in Maryland’s 2017 national championship-winning team, which had 18 players score a goal and six players who posted 20 or more. Saturday’s outing was a promising sign for what lies ahead if the Terps’ primary scorers are again held in check.

CORRECTION: Due to a reporting error, a previous version of this article misspelled Christian Zawadzki’s name. This article has been updated.