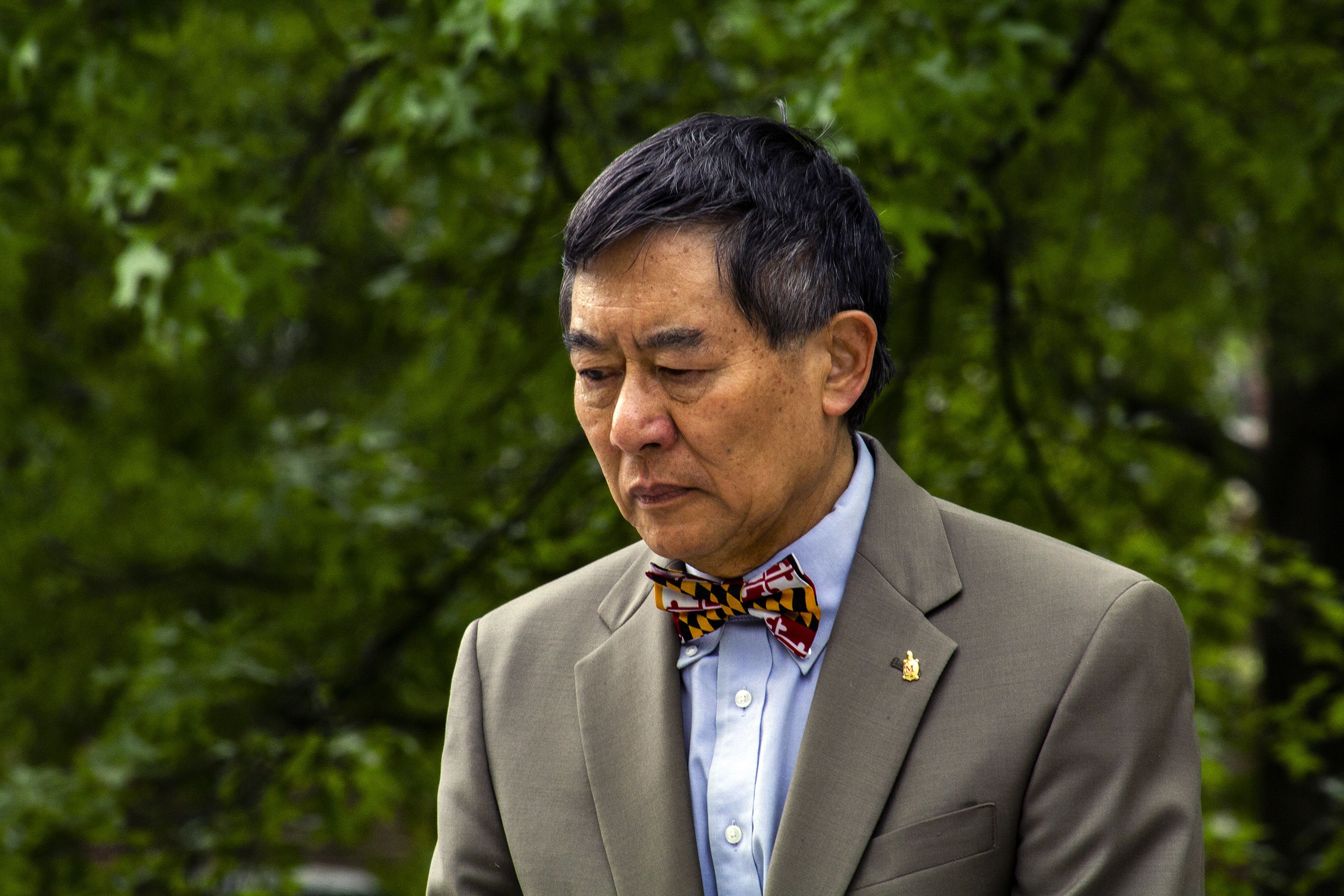 University President Wallace Loh walks through the labyrinth at the Memorial Chapel during a vigil for 2nd Lt. Richard Collins on May 10, 2018. (Julia Lerner/The Diamondback)

For Sean Lin, a freshman at the University of Maryland, Wednesday’s announcement that university President Wallace Loh would stay on a full year longer than planned was a chance to peer “behind the veil” into Loh’s decision to retire in the first place.

“It was really strategic more than anything else,” said Lin, a computer science and math major. “You feel like, ‘Oh, it wasn’t really as noble as you thought, it wasn’t as [just] or righteous.’”

Loh announced his retirement three months ago, after an investigation revealed that administrators didn’t provide proper oversight to football team staffers prior to the death of 19-year-old offensive lineman Jordan McNair. Before Wednesday, neither he nor the University System of Maryland had indicated he was wavering in that decision.

At the same press conference where Loh pledged to retire, the University System of Maryland Board of Regents recommended that football coach DJ Durkin and athletic director Damon Evans keep their jobs. But about a day later, Loh fired Durkin.

The Washington Post later reported that the regents told Loh if he didn’t retain Durkin, they’d find someone who would.

“We saw their poor decision-making on full display last semester, with regards to the handling of Coach Durkin, and I do think it’s very poor of them to remain absolutely silent for months about the future leadership of the university and then come out with the reversal,” the senior government and politics major said.

Still, Allen said Loh remaining president is preferable to the board appointing an interim president.

“It’s critical that we have stability in the leadership of the university,” he said. “We’re in the midst of a $1.5 billion capital campaign. We’re in the process of rebuilding after the chaotic events of last semester.”

“This is probably just as crazy of a decision as bringing Durkin back,” he said.

Kira Peck, a freshman psychology major, said Loh’s about-face seemed like he was backing off on taking responsibility for “the atrocities that happened this [academic] year.”

“Now that he’s going back on his word, I take issue with that,” Peck said.

“[I’ve heard] that he kind of just seems like he’s quietly putting out fires and not really solving a whole lot of issues,” she said.

In addition to Loh’s announced retirement and reports saying he was essentially forced out, students went head-to-head at on-campus protests in the fall.

The SGA and other student groups held a rally, called “Justice for Jordan,” that was initially planned to push for Durkin’s firing but later became a rally to get students to support the football team. Many attendees took issue with this, and a coalition of 24 student groups later held their own rally — deemed “Fire the Liars” — calling for the president to commit to his step down while criticizing the university’s response to campus diversity issues.

A slew of personnel changes followed Loh’s retirement announcement — regents chair James Brady stepped down from the board, and the university fired athletic trainers Steve Nordwall and Wes Robinson, who were found to be partially responsible in failing to properly diagnose and treat McNair.

Huff, a senior biochemistry major, said he thinks Loh understands “how the campus feels toward him,” which makes it confusing as to why he would stay.

“I don’t think I’ve spoken to anyone who felt strongly that Loh should stay. You’ll usually either get students who might want him to go, or you’ll get students who are just indifferent about it,” Huff said. “That wasn’t smart on his part.”

After Loh announced his retirement, Provost Mary Ann Rankin and every academic dean signed a letter begging him to reconsider. But the Graduate Student Government and University Senate each passed resolutions calling for him to honor his promise to retire.

GSG president Annie Rappeport was disappointed about Loh’s decision to stay another year, reasserting the group’s desire for the president to commit to retiring in June. Next Tuesday, Rappeport had planned to ask Loh to do just that when she met with him.

“I feel obliged to represent my constituents,” she said.

Other students, though, were a bit more ambivalent.

“The only thing I didn’t really like about [Loh] was the [Purple] Line,” she said. “Other than that, I really don’t care unless we find a better president who can run this university better.”

Wellington Acquah, a freshman enrolled in letters and sciences, said he doesn’t care about the decision to reinstate Loh.