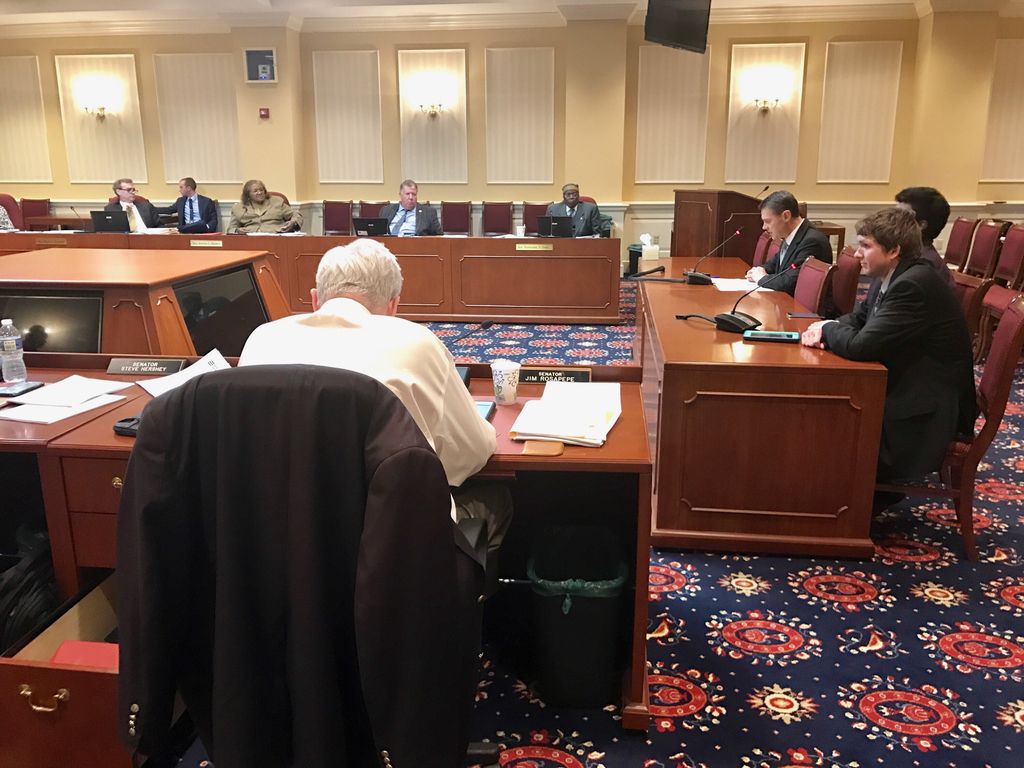 University of Maryland graduate students testify in Annapolis on Tuesday, Feb. 20, 2018, in favor of a bill that would grant collective bargaining rights to graduate student employees. (Photo courtesy of Katie Brown)

University of Maryland graduate student activists readied for yet another political battle on Thursday, introducing a bill with state legislators that would give them collective bargaining rights.

This bill — which would give unionization rights to graduate student workers at University System of Maryland institutions and two other public universities in the state — mirrors legislation that has been introduced again and again over the past decade, only to die in committee.

Now, it’s coming up in a Maryland General Assembly full of fresh faces after November’s midterms, and as this university is scrambling to recover from a semester wrought with scandal.

These factors, along with support from student groups and a more fine-tuned outreach machine, has communication doctoral student Katie Brown feeling more optimistic than ever before.

Brown, the president of Fearless Student Employees, a student group powering organization efforts behind the bill, has been pushing for collective bargaining rights in the state legislature for three years.

With collective bargaining rights, graduate student workers could negotiate wages and terms of employment with their supervisors. They could also vote to join a union, which would allow them to arrange contracts collectively.

Last semester, the graduate school made it mandatory for supervisors to discuss with their graduate assistants the duties they’d be expected to perform and summarize these duties in “statements of mutual expectation.” Brown said this step works to prevent graduate student workers from being blindsided by vague job descriptions.

Still, statements of mutual expectations are not legal contracts, so violations can’t be brought to the National Labor Relation Board. Instead, graduate students can discuss job-related concerns with the graduate school in “meet-and-confer,” a process that doesn’t result in enforceable agreement and that Brown said has failed to protect graduate student workers.

But communication doctoral student William Howell said four generations of graduate students have brought up “shades” of the same issues regarding their employment in front of legislators.

Howell is a member of the Graduate Assistant Advisory Committee, a group that represents this university’s more than 4,000 graduate student workers. While he said he thinks “our cause is right,” he added that “the distance between us and this bill being enacted is tragically far.”

Like Brown, Howell noted that the state legislature looks a lot different than it did last year. Specifically, the Senate Finance Committee, where the bill has died in previous years and will be heard again this session, has a new chair after its previous one lost his primary race to a more progressive competitor.

While Howell isn’t sure where the committee’s new chair, Sen. Delores Kelley (D-Baltimore), will stand on the bill, he said he and other graduate student activists have set up meetings with her and other new members on the committee.

The bill also has a new sponsor in the Senate this session: Sen. Jim Rosapepe (D-Prince George’s and Anne Arundel), who promised to fight for the piece of legislation, which he called “common sense.”

“It’s the right thing to do. It’s not complicated,” said Rosapepe, who has a long history of supporting collective bargaining rights in the state legislature. “Labor rights are human rights.”

Del. Marc Korman returned as sponsor for the bill in the House, where it will be heard in the Appropriations Committee.

Brown said the bill might have a better chance at moving out of committee this year as this university faces increased scrutiny following a tumultuous semester.

Last fall, a report was released that found the school’s administration was partially responsible for a lack of oversight that allowed for abuse in the football program. University President Wallace Loh announced in the wake of the report that he would retire in June.

“More so than ever, there might be a willingness to consider there should be structural changes at the University of Maryland to protect students and workers, that I think last year wouldn’t have been taken as seriously,” Brown said.

MaryPIRG, a student activism group, will stand in “social media solidarity” with FSE’s legislative battle this year, sharing the organization’s posts about the bill so they reach a wider audience. Tino Fragale, the president of MaryPIRG’s chapter at this university, also promised FSE leaders that the group would help “pack the room” at the bill’s hearings in Annapolis.

Howell and Brown said they hoped FSE’s fight for collective bargaining rights would gain more visibility through partnerships with student groups like MaryPIRG.

“It’s important to bring in the groups we worked with in the fall and really use that cooperation and coalition building to make clear to the legislature that it’s not just a one-off problem sports program, and that something is rotten at College Park,” Howell said. “It’s systemic.”