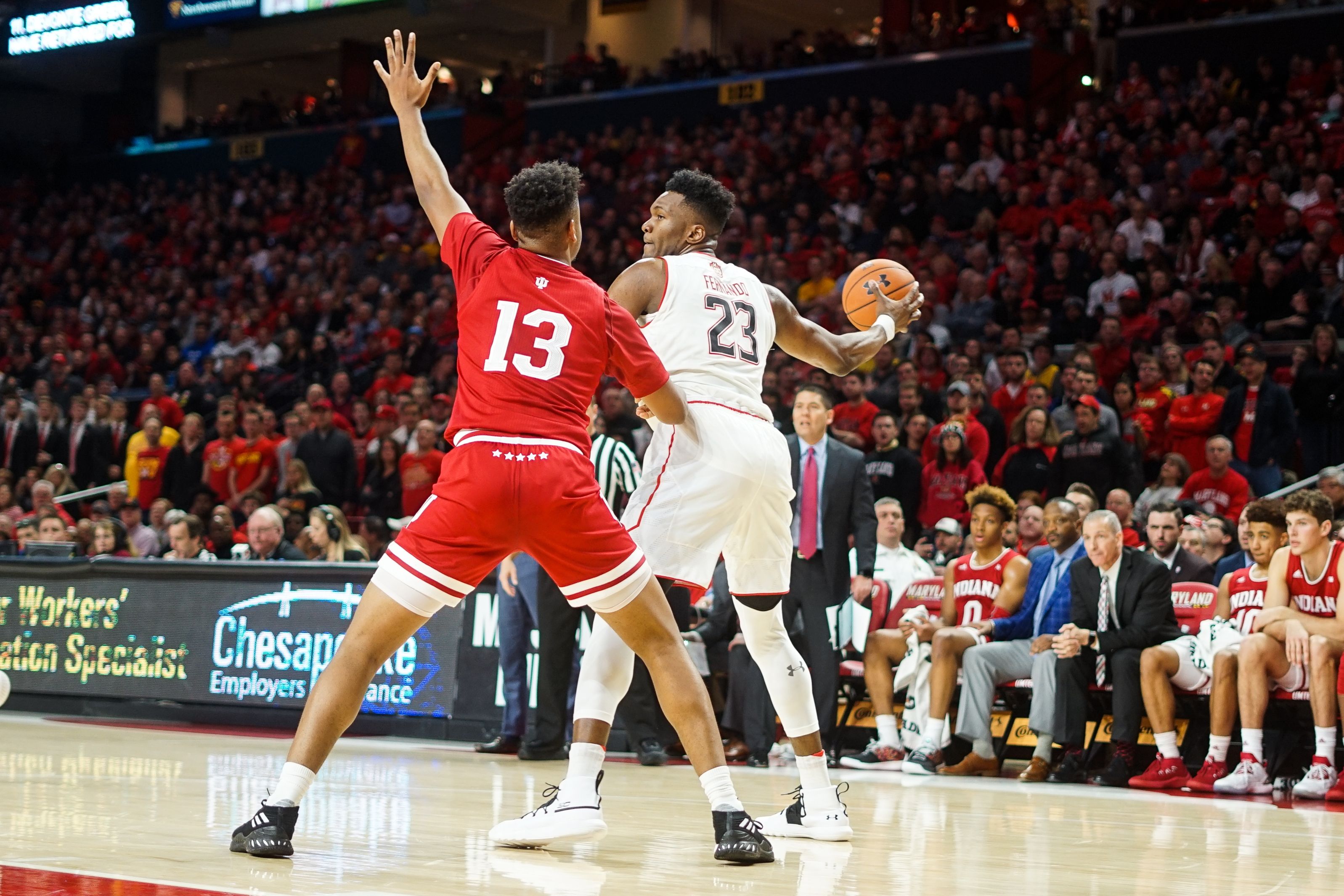 Forward Bruno Fernando looks to pass the ball to a teammate during Maryland’s 78-75 win over No. 22 Indiana at Xfinity Center on Jan. 11, 2019. (Corey Hart/The Diamondback)

By the time Bruno Fernando stomped around the Xfinity Center court and loudly declared, “I run this shit,” his second half had already made that plenty clear.

The Maryland men’s basketball forward had just banked home a 3-pointer, then drained a hookshot to give him a career-high 25 points on 11-for-12 shooting and keep No. 22 Indiana at bay late in the second period Friday.

The Terps had trailed by as many as 14 in the first half, and Fernando started just as quietly as the rest of his teammates. But his second-half dominance led Maryland during another blistering comeback that secured the team’s fifth straight win and biggest of the season, 78-75 over the Hoosiers.

“That was a great win. It’s one of the best wins — I’ve been doing this a long time,” coach Mark Turgeon said. “Just an incredible win, because we were not very good to start.”

For Fernando, the floor-slapping, chest-pounding and yelling is routine. But early in the second half, the Terps were playing so well that even his typically stoic counterpart, guard Anthony Cowan, was grinning wide.

The junior guard is more prone to the head-shaking, quiet rage he displayed as he walked to the huddle entering the final media timeout of the first half, just after he bailed the Terps out of a stagnant offensive possession with a tough pull-up jumper that pulled them within 10.

Indiana carried a 35-27 lead at halftime and scored the first basket of the second period. Then the Terps exploded for a 16-0 run, including a 3-pointer from Cowan that gave Maryland its first lead of the game and drew as big a smile as he’ll ever display.

“[Cowan] was a straight line to the basket back part of the first half, and then in the second half we had a really hard time … containing him off the dribble,” Indiana coach Archie Miller said. “Things got out of whack during the first four minutes of the second half.”

Cowan led Maryland during its lights-out second half against Minnesota on Tuesday, and he scored 10 points quickly out of the intermission Friday.

But it was Fernando who stepped up during a game when fellow big man Jalen Smith struggled so much he was limited to 11 minutes after halftime.

Fernando ran the show for the Terps, who shot 50 percent from the field and 36 percent from long range in the final 20 minutes, sparked by the 16-0 run that guard Darryl Morsell capped with a rare 3-pointer.

As impressive as Maryland’s run early in the second half was, its performance at the start of the first half was equally abysmal.

Turgeon’s team opened the game 1-for-9 from the field and missing its first four shots from deep. The same Terps offense that caught fire in the second half against the Golden Gophers struggled mightily against a physical Hoosiers defense. Indiana forced four turnovers in the first eight minutes and opened up a 17-4 lead.

“We’ve got to fix it. We were flat,” Turgeon said. “We weren’t good, and Indiana was terrific.”

Maryland started to find its footing on offense midway through the first half, as Cowan began driving to the basket en route to his 24 points. But Indiana kept scoring, using effective inside-out scoring marked by 10 points from guard Devonte Green and six points apiece from forwards Juwan Morgan and Justin Smith.

Morgan and Smith helped eliminate Smith, holding the freshman to two points on 0-for-9 shooting, and had similar success against Fernando initially. But the Terps sophomore came alive late in the half during a crucial 10-2 run that brought the Terps back in it.

“Part of it was me not being as aggressive as I usually am,” Fernando said. “I was just trying to be careful and not trying to pick up a foul.”

He had no such worries in the second period. Cowan said the whole team played “a little bit more free” after coming out of the locker room, and it showed. Morgan made the first bucket to push Indiana’s lead back to 10, but Maryland took control after that.

“Indiana guarded [our offense] as well as anybody’s guarded it,” Turgeon said. “Eventually, we were able to break it down a little bit and keep playing through Bruno and Anthony getting to the rim.”

Cowan started the onslaught by burying 3-pointers and muscling tough finish after tough finish. Then Fernando reminded everybody why he’s considered one of the best big men in the country, putting on the best performance of his career and lifting the Terps to their second ranked win in as many weeks.

“We wouldn’t have won [this] game before Christmas,” Turgeon said. “I love the poise we played with, that Anthony or Bruno had the ball in their hands almost every possession late in the game. That’s just guys growing up and understanding … how we need to play.” 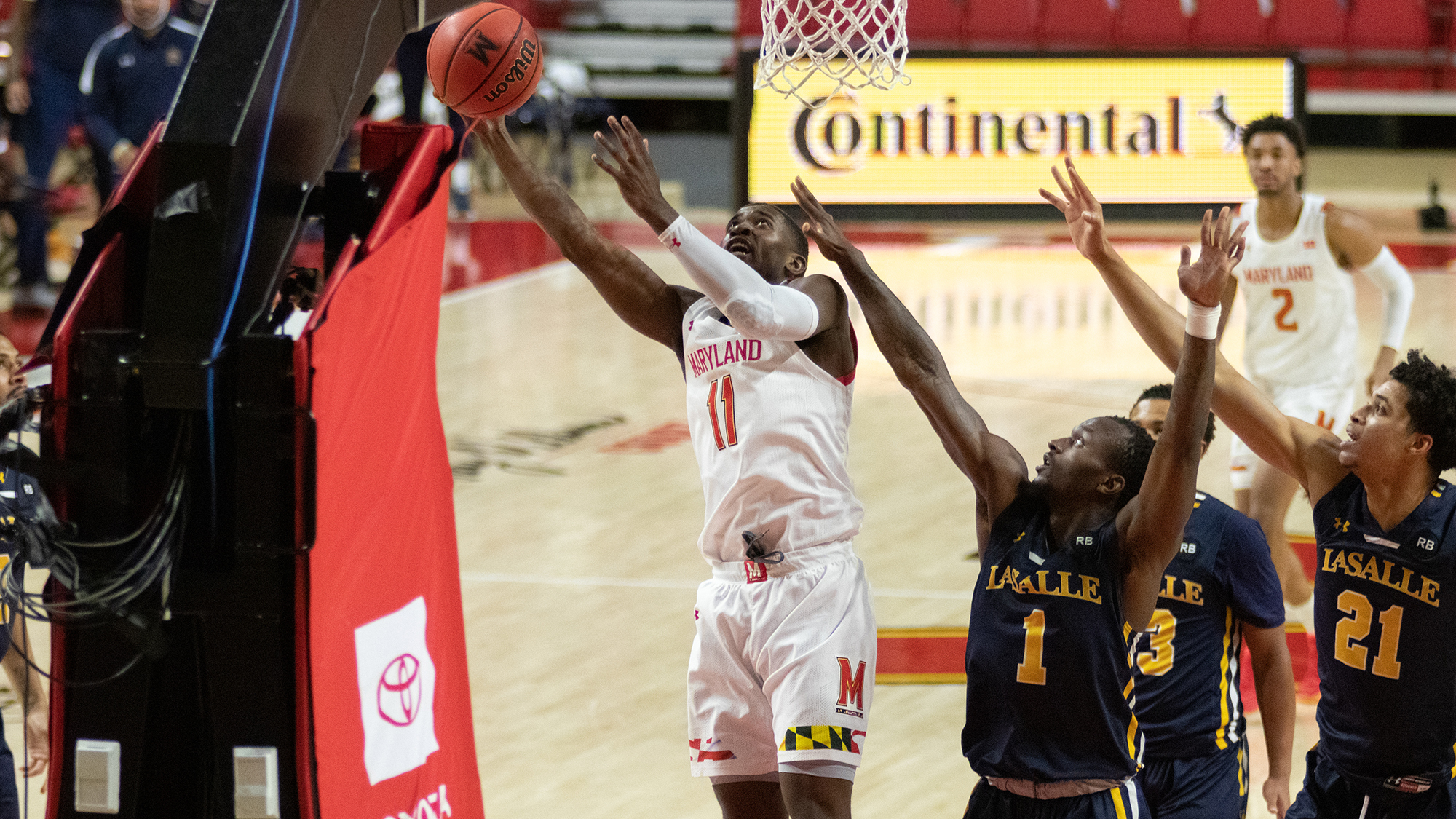