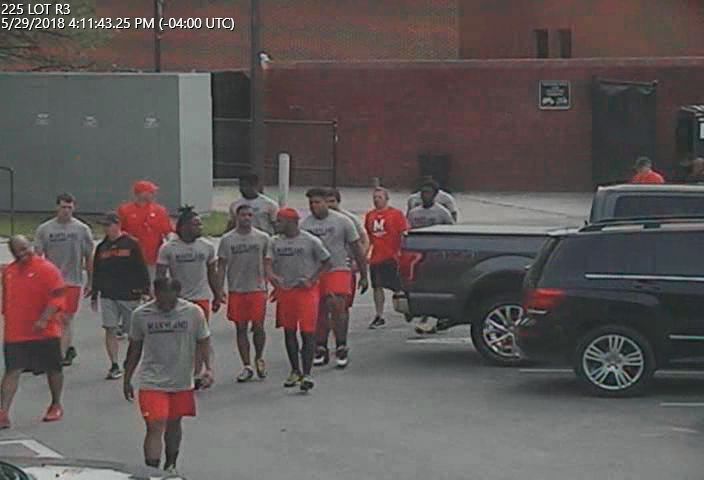 The University of Maryland released several heavily redacted videos Thursday — months after media outlets filed public information requests for them — helping to confirm the timeline of Maryland football offensive lineman Jordan McNair’s final workout May 29 and the medical care he received when he suffered heatstroke.

Surveillance footage shows McNair struggling and needing support from his teammates to finish a conditioning test or even walk at about 5 p.m., about an hour before trainers called 911.

In one video, a University Police officer expresses frustration with how long it took for first responders to reach and hospitalize McNair.

“They’re moving so fucking slow, it’s pissing me off,” the officer said as she waited for a second ambulance to reach McNair.

But that was more than an hour after McNair failed to complete his 10th 110-yard sprint. Maryland athletic trainers Steve Nordwall and Wes Robinson — who are no longer employed by the university — didn’t call 911 until almost 6 p.m., even after McNair was struggling to stand upright at 5 p.m.

In June, the university hired sports medicine consultant firm Walters Inc. to investigate McNair’s death. Dr. Rod Walters relied heavily on surveillance footage in his investigation, and his final report, which was released in September, covered much of the information in the videos.

But before Thursday, the university had denied public record requests for the video, due to the Maryland attorney general’s ongoing investigation. Danielle Brown, a paralegal in the university’s Office of General Counsel, explained that while the attorney general’s investigation as a whole is not resolved, it has finished its review of the videos.

Citing an exemption related to revealing medical information, the university redacted much of the footage, preventing detailed looks at the insufficient treatment McNair received from team trainers.

The university released the videos mere hours before closing for winter break, and there were five different types of video files in the package. The privacy settings were changed multiple times: The university initially made the videos public, then removed them and reshared them with a set list of emails, most of them journalists.

In a statement released Thursday, a university spokesperson said the videos had been shared with McNair’s family prior to its release, and that “[o]ur thoughts remain with Jordan McNair’s family, friends and teammates.”

An attorney general spokesperson declined to comment because of the legal claim from the McNair family lawyers.

A surveillance camera situated on Jull Hall facing Stadium Drive and part of the football practice fields shows McNair struggling to complete 10 110-yard sprints at the first team workout of the summer. McNair completed his first seven sprints within the allotted time frame, but missed the mark on the final three.

After his teammates finished the 10th sprint, many of them ran back out of frame to assist McNair, who already appeared to rely on his teammates to near the finish line, his arms over their shoulders.

When asked about the sprints at a Sept. 21 news conference, Walters said he “was not told that [McNair] was carried. He was running, and they were kind of holding him on the side.”

After the sprint, McNair still needed support from teammates and trainers to stand upright and was bent at the waist once he was let go. Two trainers then hoisted McNair between them and slowly carried McNair away from the Varsity Field House and Gossett Football Team House toward practice once more.

The same police officer voiced frustration at 6:04 p.m. as she waited for an elevator inside Gossett Team House for the first set of EMTs to bring a gurney through the facility, about an hour after McNair finished his 10th sprint.

“I don’t know why they’re moving so slow,” she said.

Part of the reason for the delay was confusion about where the ambulances were supposed to arrive, a problem caused in no small part by trainers failing to send anybody to meet the first responders.

The videos offered the clearest view to where exactly ambulances arrived. The first pulled up to the front of Gossett Team House at 6:03, and EMTs took a gurney inside. About seven minutes later, a second ambulance — with responders trained in Advanced Cardiac Life Support — drove to meet the first ambulance in front of the team house, then pulled away and drove around to the side of the building, which is a floor below the front entrance.

“They’re not moving yet,” a police officer said as the ambulance remained still for a few minutes after McNair was loaded.

To turn around, the ambulance drove onto the field at Maryland Stadium and looped through the south end zone before departing for Washington Adventist Hospital in Takoma Park. McNair was subsequently transported to R Adams Cowley Shock Trauma Center in Baltimore, where he died June 13.