Year in review: The best random stuff of 2018 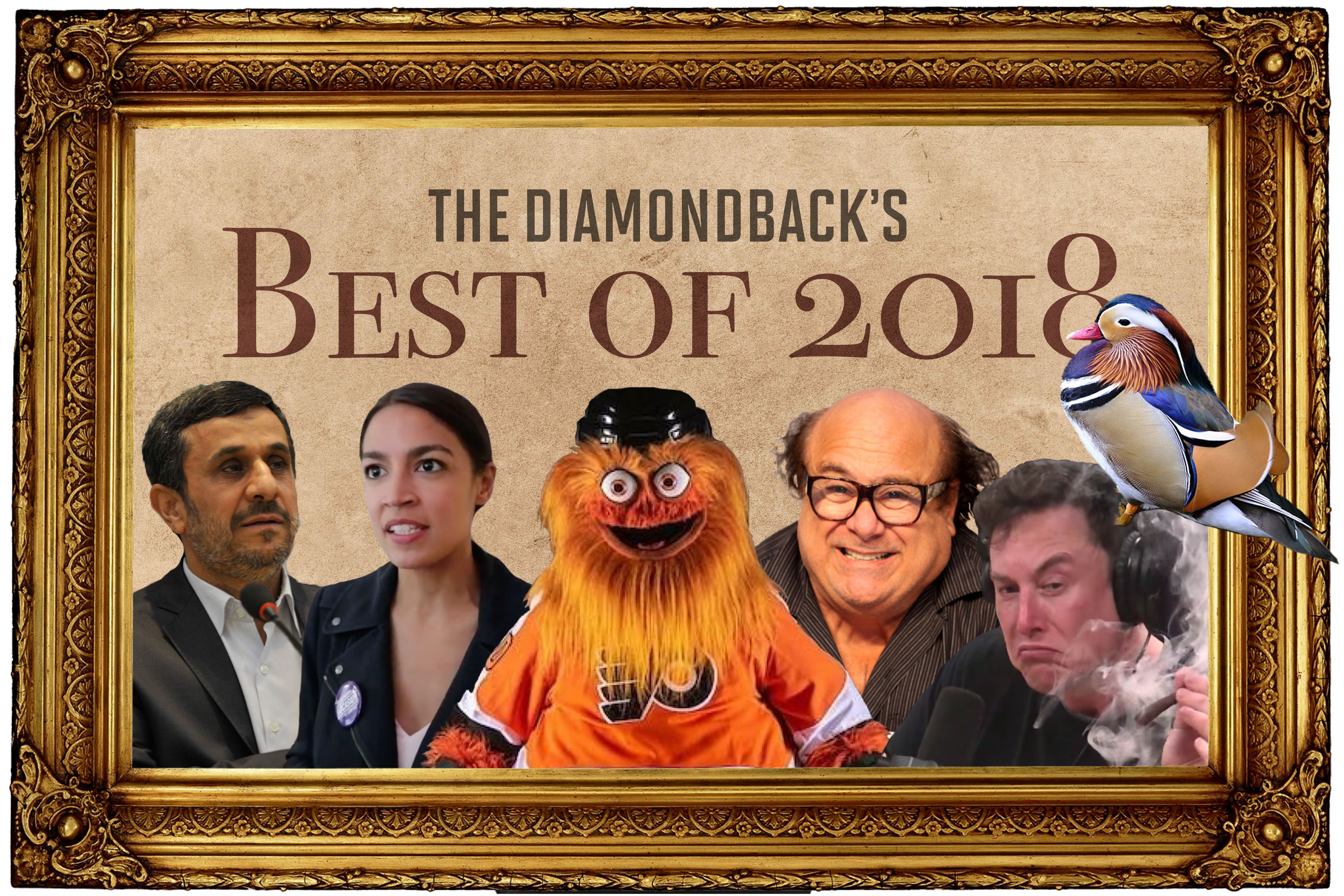 The World Cup was this year — do you remember that? The biggest sporting event in the world? Or did it kind of slip your mind? So was everyone talking about eating Tide Pods. Feels like forever ago. But no, it was all in 2018. What a busy year. We got through it, though, and there’s some stuff that we’re glad we got to experience this year. Here are some of our staff members’ picks for the best random thing of 2018.

2018 has been a dumpster hellfire for just about every person I know. Through the countless political scandals, humanitarian crises, celebrity deaths and overall depressing state of our world, everything seemed to lose color.

The Central Park Mandarin duck, more formally known as Aix galericulata, first grabbed the spotlight in early October when he allowed our mortal eyes to gaze upon his vibrant colors. First a local phenomenon, then becoming the most talked about duck in the country allowed for the rise of a celebrity that we so desperately needed.

Mandarin duck is stunning. Mandarin duck is equally loved by all. And best of all, Mandarin duck does not have tweets from 2011 showing neo-Nazi inclinations. The mere existence of this handsome waterfowl in Central Park, and the nation’s collective excitement and fawning over him, felt like a sigh of relief among the recurring punches to the face that a 24-hour news cycle can feel like.

Mandarin duck is for everyone, and that is why he will be one of my favorite things of 2018 (but also, forever).

When the Philadelphia Flyers first introduced Gritty as their mascot in September, I was immediately captivated by his unique hideousness. While his bulging googly eyes, unkempt neckbeard and Trumpian orange complexion were nightmare-inducing for many, I could sense he was a misunderstood soul.

Just as quickly as Gritty descended from the rafters of the Wells Fargo Center, the internet berated him. John Oliver passionately exclaimed that Gritty is “fucking horrific,” and described him as a “mutated carpet swatch.” And Colin Jost likened the 7-foot-tall creature to the “crayon drawings of a 5-year-old who saw his parents murdered.”

But much to my delight, Gritty has evolved from a grisly beast into a national treasure in the public consciousness. His on-ice antics and unique talents — including blowing smoke out of his ears and producing a squeaking sound with his belly button — have melted skeptics’ frigid hearts. His everyman persona has even prompted antifa to repurpose him as a left-wing foil to Pepe the Frog.

Gritty may be a bit rough around the edges, but behind his alarming appearance is a humorous being who is as passionate about hockey as he is strange. And for Philadelphia fans who are nationally perceived as some of the trashiest but also the most die-hard, Gritty is perfect.

Even in 2018, Danny DeVito has continued to captivate our nation’s heart with his leftist politics and snapshots of his “troll feet,” both of which frequently grace his Twitter followers’ timelines.

The actor’s 4-foot-10 frame and absurdist sense of humor make him inherently meme-worthy, but some SUNY Purchase students took their Danny DeVito obsession to a new level. They built a shrine for him in a cave-like secret room behind a paper towel dispenser in a men’s bathroom on campus. The shrine quickly went viral on Twitter, eventually catching DeVito’s attention: “Your shrine honors me. My heart is filled with love and garbage.”

But with fame comes scrutiny. Following the shrine’s newfound stardom, the school took it down and sealed off the cave, making it a morality tale fit for the weird hellscape that is 2018. One SUNY student posted on Facebook: “Your narcissistic quest for social media recognition has sealed the bathroom shrine forevermore. Shame on you.”

Were we better off living in ignorance of the shrine’s existence, or was the bright light it briefly shined on our timelines worth its eventual destruction? RIP, Danny DeVito trash shrine. You were too good for this world.

Elon Musk is a genius, but probably not in the way he thinks. The man is an absolute mastermind at unintentional comedy. I mean, look at him.

Look at him smoking a joint. He looks like someone who unironically posts Joker memes on Facebook. Look at him calling the hero who rescued kids from a Thai cave a pedophile, solely because he didn’t like Musk’s harebrained submarine idea. Look at him and his ex, Grimes. Look at them breaking up for some weird scandal involving Azealia Banks (!?) that I still don’t fully understand. Look at him being forced out of his $58.7 billion company for committing security fraud via Ambien tweeting.

In a world where oligarchs control so much of our lives, it’s always fun to see one of them so publicly — and hilariously — shoot himself in the foot. Godspeed, Mr. Musk. May you make-a more of da rockets in 2019.

When we look back on 2018, we’ll see it as a special year thanks to some of the newly elected legislators across the country.

In the House of Representatives, the most famous electee is almost surely New York’s Alexandria Ocasio-Cortez. In the Democratic primary, she upset Joe Crowley, who had been in Congress since 1998; she followed that up by easily winning her general election. AOC has become a Twitter superstar — she uses the platform to easily get her message across while showing a great sense of humor in response to her critics.

AOC will be joined by Rashida Tlaib and Ilhan Omar, the first Muslim women ever in the House. Congress wasn’t the only place to celebrate newly-elected women, as Oregon governor Kate Brown became the first openly bisexual governor in American history.

From Capitol Hill to the Pacific Northwest, the 2018 midterm elections results gave us plenty to be optimistic about.

The Relentless Picnic is, at first listen, a podcast where three guys talk about books, politics and art. That description, through, does little to express the eccentricity and strangeness of this show, the best audio content I’ve heard in a long time. The three hosts — Erikk, Nick and Adam — can debate the democratic theory of Thomas Dewey, analyze Jimmy Carter’s “Crisis of Confidence” speech and roast Amazon product reviews, all in a single two-hour audio chunk.

At the beginning of a Relentless Picnic episode, it’s unclear how the various topics, stories and comedic bits relate — and the narrative satisfaction of the show lies in hearing the hosts tie those strings together. The hosts never resort to the tired storytelling tics and tricks common to the NPR audio empire — in fact, they skewer the hacks at NPR’s Radiolab and Marketplace.

Most good podcasts involve vicariously experiencing the friendship of the hosts, and the Relentless Picnic’s best feature is the genuine pleasure Nick, Adam and Erikk take in playing around with ideas. They’re bright and extremely well-read, but whenever the show seems like it’s getting too self-serious, too much like a dorm room bull session, they’ll cleanse the audio palate with some strange, wonderful and hilarious bit. New listeners should start with “Just Citizens,” “Ragnarok” or “Alexa Lives on Aristotle.”

I hate country music, but I thoroughly believe Mason Ramsey was one of the best things to happen to us in 2018. Ramsey, aka the Yodeling Kid, brought so much wholesome content to our lives, and unlike most popular meme stars, he never turned sour with problematic statements or connections (which I guess is easy since he’s a pre-teen but, still).

Yodeling Kid has now turned into a solid reminder of how horribly long this year has been. The original video of him singing Hank Williams’ “Lovesick Blues” in Walmart while wearing cowboy boots came out in fucking April — not two years ago, but April. Since then, Ramsey went on to release his “Famous EP” and a cover of the iconic holiday track “White Christmas.”

Most politicians suck at Twitter. Their accounts consist of press releases, milquetoast jabs at their opponents and terrible attempts at jokes, and they never show us their human side. But Mahmoud Ahmadinejad is different. This year, the former Iranian president — who once banned Twitter in his country — has become a Twitter power user.

Ahmadinejad has referenced Tupac songs. He’s offered support for Colin Kaepernick, LeBron James and Serena Williams. He’s engaged with his followers, weighing in on Michigan football and hitting podcaster Virgil Texas with a follow back (upon request). And of course, he’s fiercely criticized the U.S., often mixing in absurdly long hashtags like #DictatorshipOfDollar.

With most politicians relying on a comms team to sanitize their social media presence, Ahmadinejad’s earnestness shines through. His tweets are rife with superfluous words and typographical errors and far too many hashtags, making them borderline incomprehensible — just like those of his generation.

On the one hand, Ahmadinejad is an autocrat, a bitter homophobe and a Holocaust denier. On the other hand, he creates some good #content. Iran, so far away, is his home, but in my heart he’ll stay — thanks to Twitter.