Wallace Loh had one main priority as president: Make UMD as much money as possible 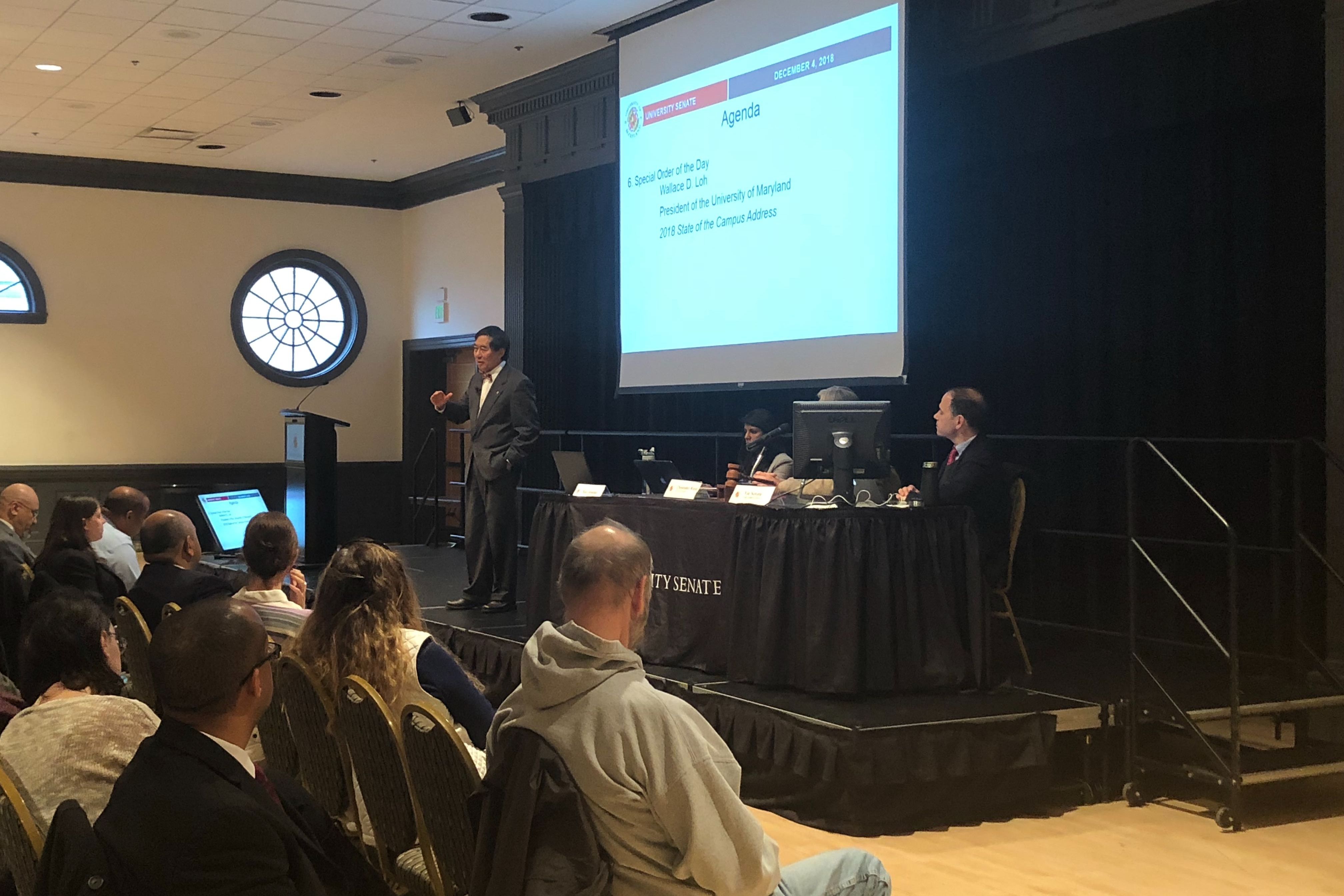 University of Maryland President Wallace Loh gives his State of the Campus address in front of the University Senate on Dec. 4, 2018. (Grace Mottley/ For The Diamondback)

In his final State of the Campus address, University of Maryland President Wallace Loh confirmed what we already knew: His main goal as president was to get the university as much money as possible. He rattled off the familiar talking points for anyone who’s attended a campus tour or dared to click on the Maryland Today news blasts.

He touted this university’s social innovation efforts in the privately-funded Do Good Institute, mentioned how the number of applications we receive each year has increased, vaguely praised our diversity while brushing off the declining black freshman enrollment and completely ignored the numerous incidents of hate speech and discrimination on our campus.

He praised his own record of unprecedented collaboration with the City of College Park by talking about the $2 billion in development and investment that his Greater College Park plan has generated, ignoring the looming potential of displacement of low-income students and families. He cited the donations he’s received such as the $985 million raised from his 1.5 billion capital campaign as vital to this university’s survival and success.

To Loh, research and teaching was about “dominating” in our region, spending more money and attracting more students than neighboring universities such as Virginia Tech. His agenda is to grow and compete, rather than to nurture and support.

By repeatedly framing this university as “the engine for economic development in the mid-Atlantic,” Loh diminished our educational purpose and ignored the substantive realities that students, especially those from marginalized communities, face each day. In its boundless pursuit of private donations to compensate for state budget cuts, Loh’s administration could not stop to adequately address the countless scandals that struck our campus. As a result, students were left behind, shut out and irrevocably harmed.

The sad truth of Loh’s speech is that in the context of our contemporary American economy and profit-focused higher education landscape, his tenure has been successful. We can’t blame him for doing his job and doing it well.

The larger question that we must ask is whether any university president can continue to complacently accept limited funding from the state and submit to working solely as an extravagantly payed fundraiser and lobbyist. After the deaths and scandals we’ve endured as a community, we cannot afford a university administration that endlessly seeks profit, private donations, growth and domination while overlooking the impacts on the students it seeks to serve.

If students cannot afford housing and food near campus, do not feel safe in their residents halls and cannot ensure that they will survive their four years here unscathed, no amount of new bioengineering buildings or fancy hotels can gain back those students’ trust.

Regardless of who replaces Loh, our campus community needs a fundamental overhaul in how our university is funded and evaluated, prioritizing public funding and accountability to students. Above all, we need a leader who is truly fearless enough to get us there.