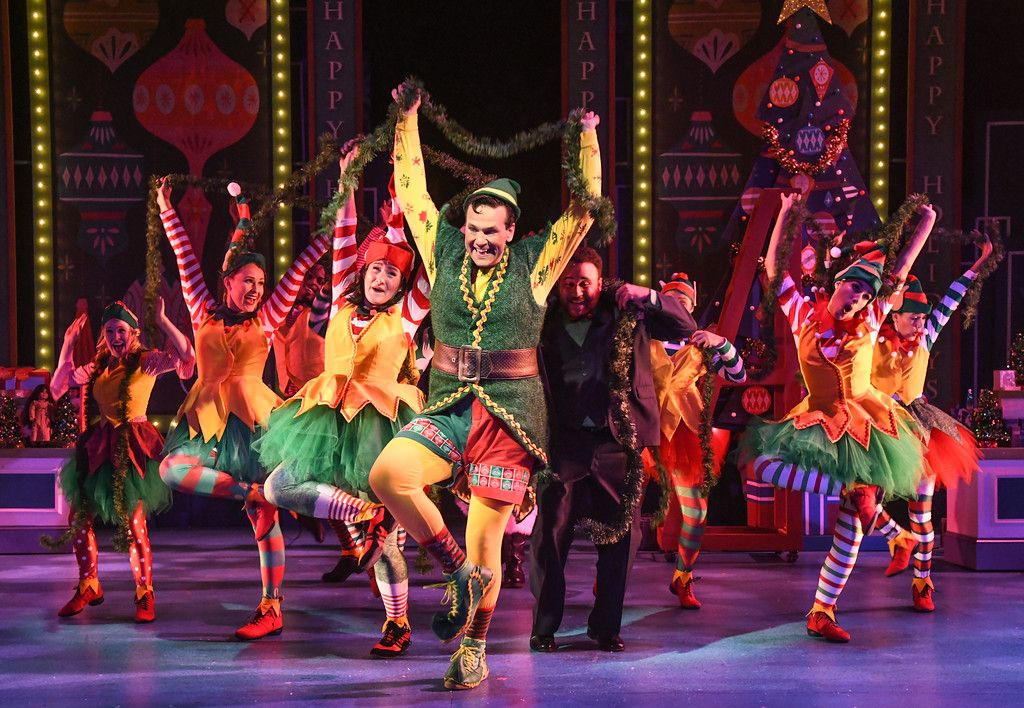 I don’t have the data to back it up, but I may have seen Elf more than any other movie.

Anyone who’s watched a movie seemingly a million times knows the struggle that comes with it — it’s almost as if the joy of the experience comes not from the film itself but from your own ability to recount the moments you love.

This is super easy to do with a movie as memorable as Elf. From “Buddy the elf, what’s your favorite color?” to his pronunciation of “Franciscoooooo,” Will Ferrell’s character is endlessly quotable, especially upon repeat watches.

So it should be no surprise that both of those quotes appear verbatim in Olney Theater Center’s rendition of Elf the Musical — an endlessly energetic, enjoyable holiday special that occasionally comes across as fan service.

The biggest issue in a stage adaptation of Elf is finding someone who can carry the show the way Will Ferrell carries the movie. Fortunately, David Schlumpf is more than up to the challenge. In terms of sheer energy, his Buddy rivals Ferrell’s version.

Some of Ferrell’s innocence/ignorance is missing here — Buddy never accidentally flashes his junk at his stepmom in the stage version — but what Schlumpf’s version of the character lacks in nuance, he more than makes up for in sheer exuberance and vocal ability.

Because, that’s right, Elf the Musical is a musical. Stylistically, it’s the biggest departure from the film, which only ever used singing as a joke and/or way to spread Christmas cheer.

The music, by Matthew Sklar, is bright, bombastic Broadway. The songs are tight, simple and frequently sound like beefed up versions of the jazzy Christmas classic we know. The songs occasionally feel like they’re just there to justify the adaptation in general. Like, “why not just stay home and watch the movie?” Songs, that’s why.

The show’s not light on them either — Act I has 10 musical numbers, and act II has 8. Given the play’s rather lengthy runtime, it’s not hard to feel like a few of these could have been cut. As amusing as the song about out of work Santa Clauses eating Chinese food and getting drunk is, when it pops up early in the second act, it feels unnecessary.

But if you’re worried about the actually quality of vocal performances, have no fear. Every single cast member, from Walter Hobbs (Bobby Smith) to elf-meets-girl love interest Jovie (Patricia Hurley) can sing their asses off. While the musical numbers might feel a tad tacked on, the performances make them a thoroughly fun experience.

Is Elf the Musical must-watch Christmas material in the same way the film is? Of course not. But it is a fun musical romp through the seven levels of the Candy Cane forest, the sea of swirly-twirly gumdrops, AND the Lincoln Tunnel. It features great performances, strong direction and enough Christmas spirit to get the whole family through the stress of the holiday season. (Just don’t tell Buddy the Elf I said that.)