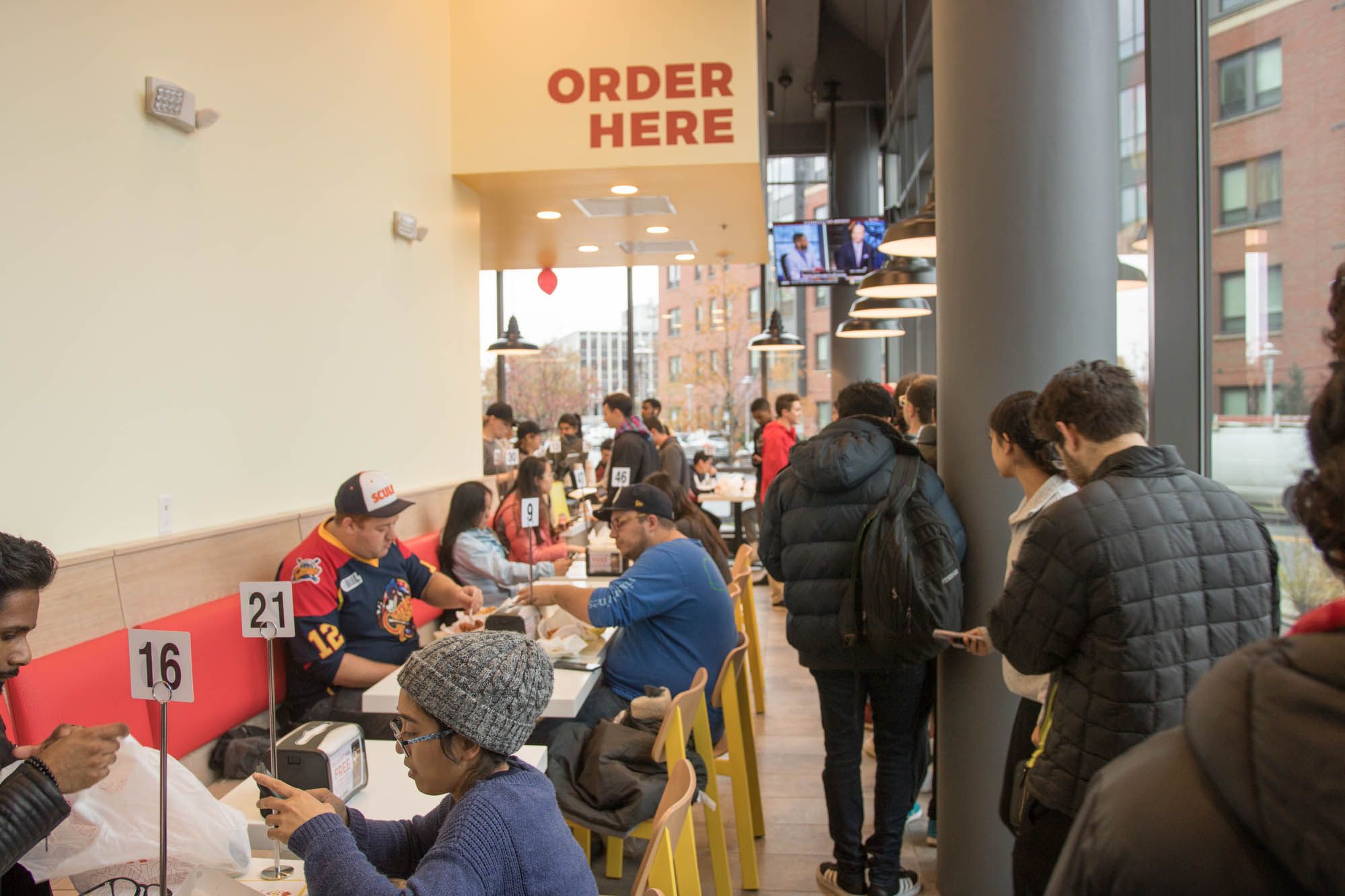 Throngs of hungry, smiling customers snaked out the doors of College Park’s new chicken wing restaurant at its opening Monday.

The fast-food restaurant, Wings Over, offers fresh chicken wings, chicken tenders and sandwiches in more than 20 different flavors, and is one of three new restaurants to open in the Terrapin Row retail space since the building opened in 2016.

“For us, it’s always very important to be a part of the community,” said Dan Levya, who oversees daily operations for the nationwide business. “For a very long time, we’ve gotten a lot of requests to come to the College Park area.”

Levya, who acquired the corporation with three friends in 2017, said the College Park location is one of the first stores to open after a company rebrand last fall.

The rebrand included a new logo, website, online app, restaurant design and menu options, such as different flavors and tater tots, Levya said. “This is really a great opportunity for us to finally display and showcase what we’ve been working on for the last year,” he said.

“I think it’s going to be very beneficial,” Chelton said. “The Terrapin Row retail space has been empty for quite some time now. I’m glad that they are finally filling up.”

Currently, Wings Over has more than 40 locations — some of which are owned by franchisees — across 13 states. In the corporate College Park location, Levya hopes to continue to improve the company by catering to students, families and young professionals who are excited about “solid and fresh wings.”

“We’re hitting the Midwest right now, but we plan on making our way to Texas and our way across the country,” Levya said. To celebrate the opening, the business offered free wings Monday to customers who downloaded the Wings Over app. Lauren Morrissette, a sophomore kinesiology major, took up the offer.

“There’s been a lot of hype building up for it,” Morrissette said. “When I heard they were giving out free wings, that’s when I decided to come down.”

While many students came for the free food, Ramanuja Sreenivasan, a junior chemical engineering major, came for the convenience and the atmosphere.

“It’s another food place to go,” Sreenivasan said. “It’s somewhere to hang out.”

Emily Keeney, a sophomore information systems and operations management and business analytics major, stopped by because she lives in Terrapin Row’s Building 1, which is “really close and convenient” to the new store.

“It’s right by our building,” she said. “Sometimes going to Chipotle, it’s like, ‘Do I really want to walk there?’”