UMD students boycotted a psychology exam. Their instructor was delighted. 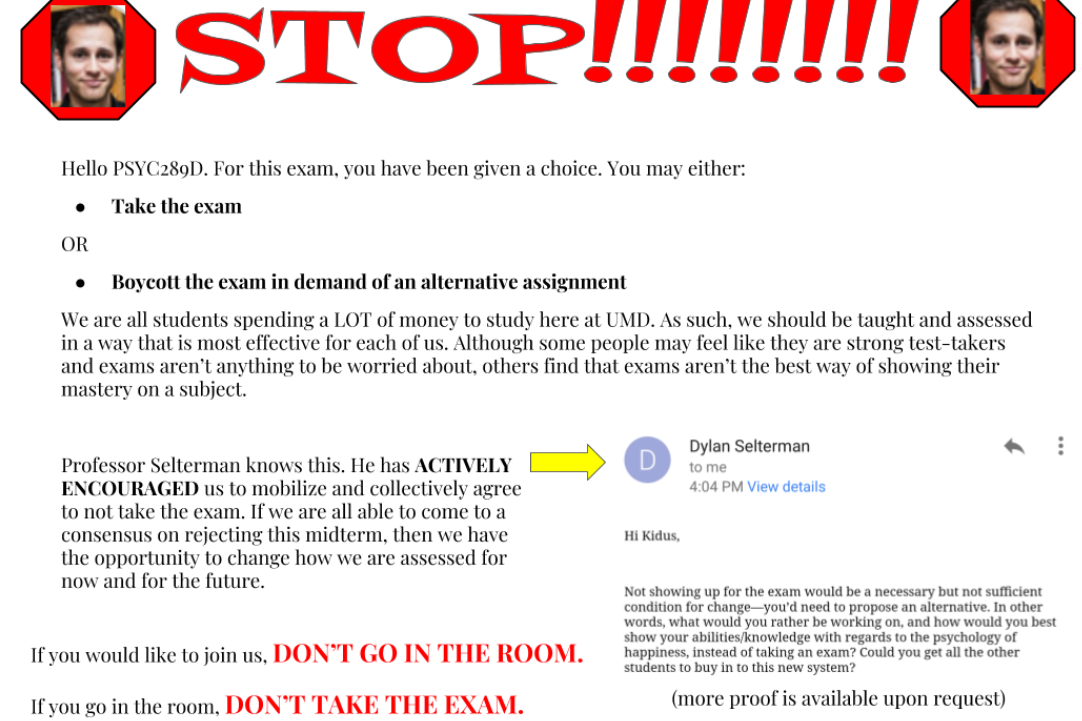 UMD students boycotted a psychology exam during the week of Nov. 10, posting signs like this one to gather support among the hundreds of students in the class. (Photo courtesy of Kidus Solomon)

Kidus Solomon thought skipping his exam could help his grade.

At least, that’s what the junior communication major hoped when he and hundreds of his classmates decided to boycott their PSYC289D exam during the week of Nov. 12.

After a lecture on intrinsic motivation and the education system, a conversation in the class group chat inspired Solomon to email Dylan Selterman, the instructor for “Psychology of Happiness,” to ask what would happen if the class boycotted his exam.

“I was wondering, hypothetically speaking, if this WERE to happen and no one showed up for the exam, what would be the result? Would we just take it Wednesday? Or would class proceed as if we actually took it,” Solomon wrote in the email.

Selterman responded, saying that not showing up for the exam and proposing an alternative assignment could change whether or not an exam was given.

Solomon posted the email outside the classroom door, urging students to not take the exam.

Selterman, whose teaching techniques have made headlines in the past, said he was thrilled when he was notified of his students’ plan to boycott the exam.

“I encourage them to take action and to work for change,” Selterman said. “If they don’t believe that taking exams are reflecting what they’ve learned or their academic abilities or performance, then they should work toward changing the system to be more beneficial to their own learning.”

In 2015, Selterman’s “tragedy of the commons” exercise went viral after a student tweeted out the dilemma in frustration. The challenge offers each student the choice of adding either two or six extra credit points to their term paper. However, if more than 10 percent of the class opts for six points, no one gets any extra points.

The tragedy of the commons is a concept in social science, which states that individuals often work independently for their own self-gain rather than work together, to the detriment of society as a whole.

Solomon said he and other students used the 2015 extra credit example as a way to convince their peers to follow along.

“Someone posted screenshots of an article that was written about his whole extra credit thing and we were drawing a lot of connections between the two,” he said.

Some students, like junior economics major Wyatt Woods, were initially skeptical of Solomon’s strategy, but quickly decided to boycott once most of the class agreed.

“Leading up to the exam, I thought it was kinda ridiculous, but if everyone else wasn’t gonna take it, then I felt satisfied not taking it as well,” Woods said.

Just 13 students ended up taking the exam, Selterman said, of the 235 students enrolled in the class, according to Testudo. He added that his exams have never been boycotted before and this experience will make him think about how he prepares for future courses.

After discussing as a class, students were given four options for an alternative assignment, which could be in a video, infographic or written format.

Karli Weeks, a junior psychology major, said it was hard to garner support for the protest initially, as the groups’ success was dependent on each individual students’ decision. But she said the exercise proved that learning isn’t just about taking exams.

“I do think that it was a really amazing opportunity,” Weeks said. “We were able to show what we knew in so many different ways — in personalized ways — that were different than the classic standardized exam.”