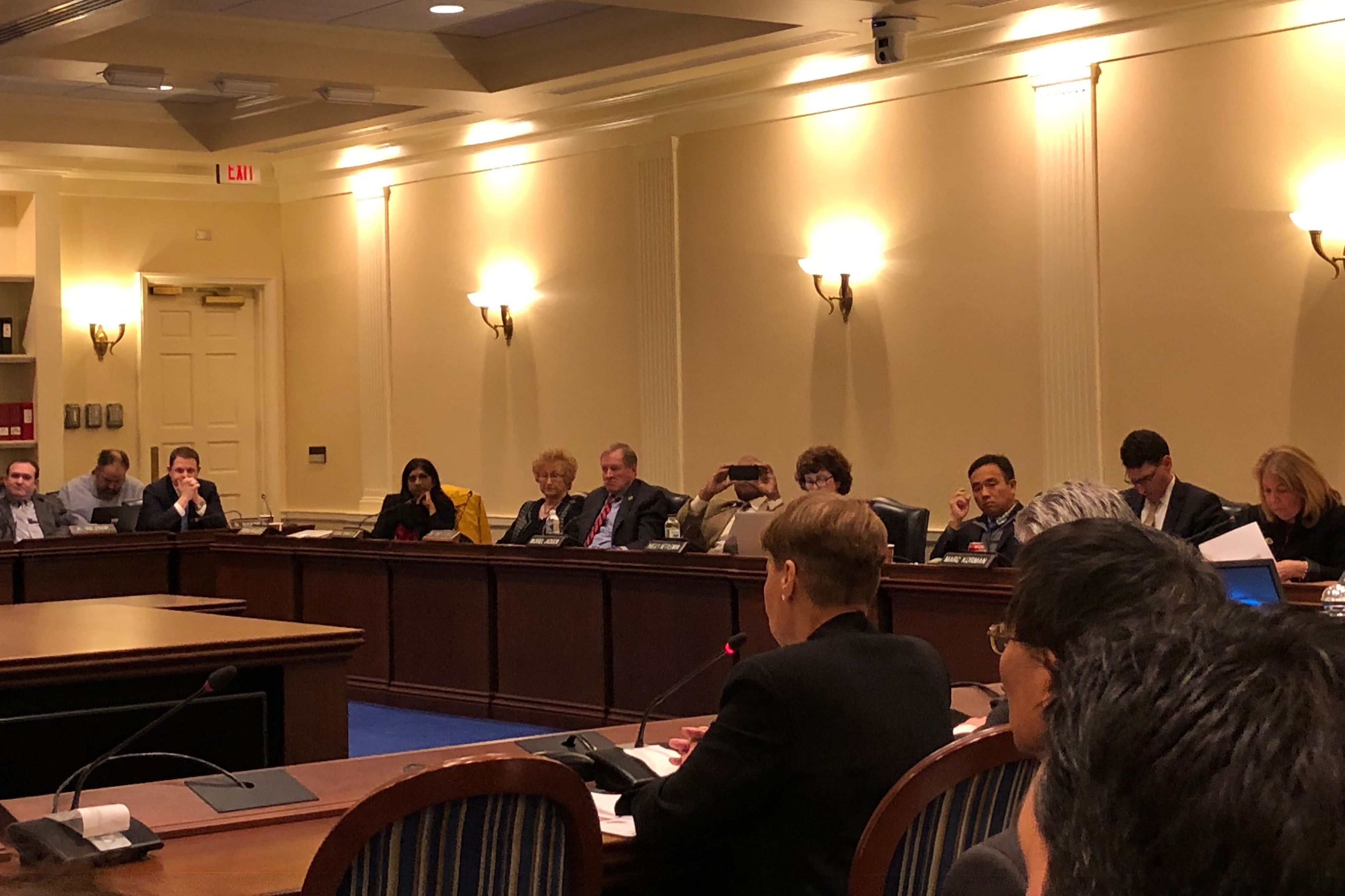 Board of Regents Chairwoman Linda Gooden speaks about the board’s staffing recommendations following the investigation into Maryland football at a General Assembly hearing in Annapolis on Nov. 15, 2018. (Brooks DuBose/For The Diamondback)

Members of the Maryland General Assembly held a hearing Thursday with representatives from the University System of Maryland, hoping to determine just what led to the Board of Regents’ recommendation that football coach DJ Durkin stay with the Terps.

But they didn’t get very far. Regents chair Linda Gooden and Chancellor Robert Caret were tight-lipped about the personnel decisions they made behind closed doors after an investigation into Maryland football found dysfunction permeated the highest levels of the administration.

The investigation prompted the resignation of university President Wallace Loh, and ultimately caused the departure of Durkin and other members of the training and coaching staff. A prior report had showed that school trainers botched the treatment of 19-year-old lineman Jordan McNair, who died of heatstroke he suffered at a team workout.

When Barnes asked if reports that the board forced Loh to retire were true, Caret declined to answer, saying the decision was made in a closed session.

“If you’re not going to give us these answers, what are we all doing here?” Barnes said.

Del. Kirill Reznik (D-Montgomery) asked new board Chair Linda Gooden how she voted in regards to Durkin and Evans, but Gooden said she was unable to attend the meeting.

Gooden replaced James Brady as chair, who resigned after fierce pushback based on the board’s decision to stand behind Durkin. Shortly after being named chair, Gooden retracted the board’s recommendations and apologized to McNair’s family.

Gooden did not provide specific numbers for the vote, saying only that it was a majority, but not a unanimous one. She said the board is “talking about” making vote totals public in the future, but added, “I won’t promise that today.”

Reznik said he thinks the regents did not want to fire Durkin because he “had a bright future.”

“I also suspect that, and as do you and everyone else here, that Mr. McNair had a bright future [that] was no less valuable than Mr. Durkin’s,” he said.

At one point, Del. Maggie McIntosh (D-Baltimore City), who had called for the hearing after the board’s recommendations, questioned its ability to do its job.

Gooden said she believes that it can, and added that the board has gotten “many things right” over the last 30 years. “Clearly,” she said, “we got this one wrong.”

Student Government Association president Jonathan Allen said that he was dissatisfied with the answers that the board provided in response to the “great line of questions” by members of the Committee, namely Barnes.

Allen said that he plans to set up a meeting with Barnes and work with other delegates from the Committee to “provide them with student perspectives on the matter.”

Gooden said that in making the decision to keep Durkin and Evans, the board “lost sight of the bigger picture: the ability of the university to move forward.”

“College Park’s football program needed new leadership and that need should’ve driven our decision,” she said. “When the entire board looked at the full body of work, they believed [Durkin] could move forward. That was a mistake. Dr. Loh took the exact right action and released him.”

It was an “impassioned speech” from Durkin that helped sway the board’s decision, The Baltimore Sun reported.

At Thurday’s meeting, Loh said he warned the regents that if they retained Durkin, “all hell [would] break loose.”

Students, faculty and state politicians all spoke out against the decision, and campus groups quickly planned a protest, which turned into a rally to support student-athletes after Loh fired Durkin.

The report on the team’s culture revealed that Durkin, disadvantaged by dysfunction in the athletic department, struggled to stop abusive behavior by strength and conditioning coach Rick Court.

Court resigned in August after ESPN reported that he harassed and intimidated players, creating a “toxic culture.” But the board’s report stopped short of calling it “toxic.”

“To me, death is not a result of dysfunction. It rises to the height of toxicity,” Del. Keith Haynes (D-Baltimore City) said at Thursday’s meeting.