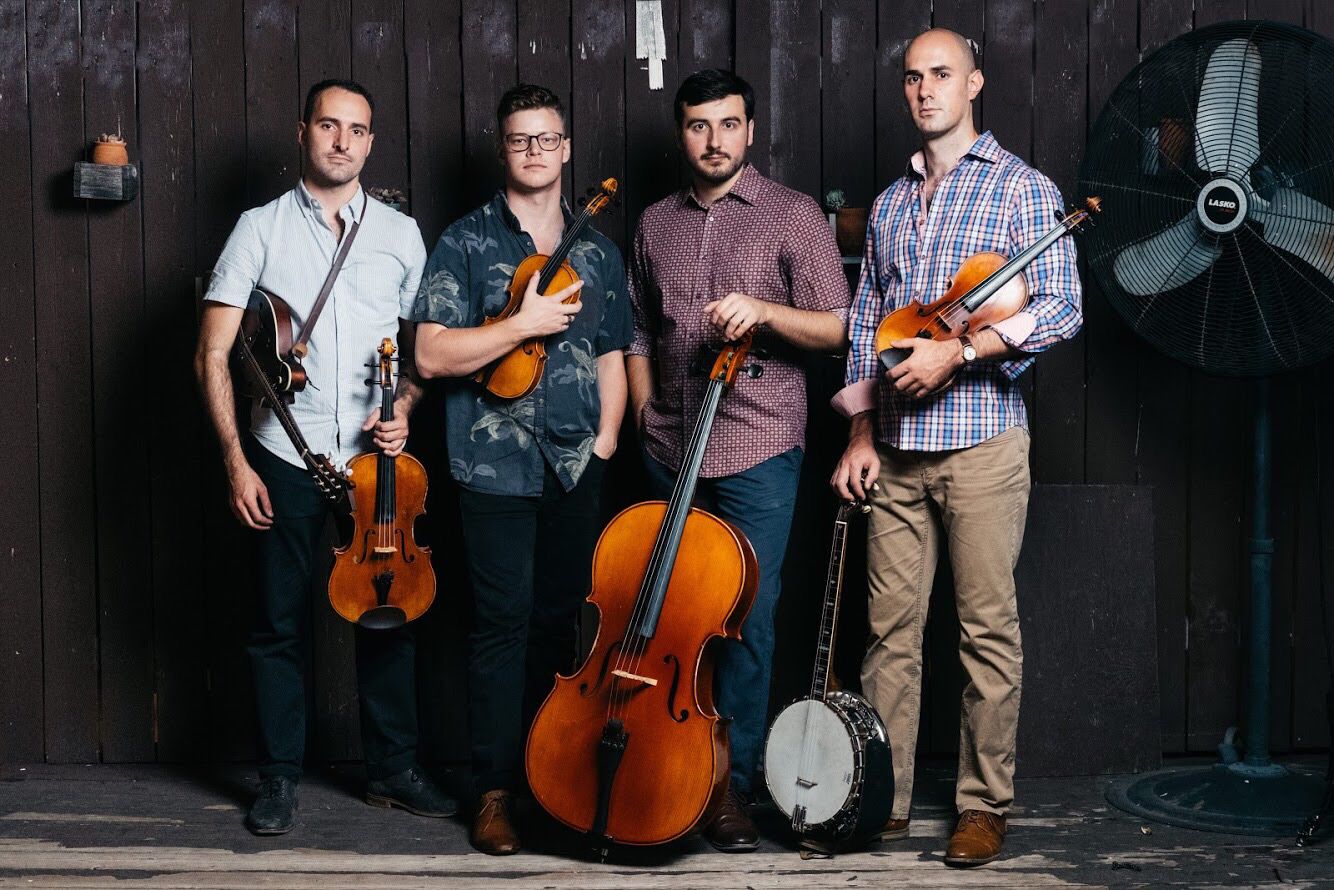 The string quartet, invoke, made up of four University of Maryland graduates (from left to right), Karl Mitze, Zachariah Matteson, Geoff Manyin and Nick Montopoli, performed a "sensory-friendly" concert for those with cognitive disabilities at The Clarice on Tuesday, Nov. 13, 2018. (Photo courtesy of Nathan Russell)

Children clapped, leapt and twirled as they moved their bodies in time with the music of the string quartet. Some played with stress balls, while others twirled feather boas in the air.

This was not a traditional concert with bright fluorescent bulbs or flashing strobe lights.

Instead, about 40 children, many of whom have cognitive disabilities, and their parents, danced around in a normally lit room, as a string quartet made up of University of Maryland graduates performed a “sensory-friendly” concert at The Clarice Smith Performing Arts Center on Tuesday night.

The performance was part of the Azure concert series, which is specifically designed to be free of some of the disruptive attributes — such as bright lights and buzzing speakers — associated with traditional concerts.

The quartet, called invoke, adopted the idea of a sensory-friendly concert from one of their coaches and mentors, who has a child with autism, said Zachariah Matteson, one of the members.

“There’s a huge population of people that could potentially feel like they can’t come to see a normal concert of classical music or something, where you’re required to be in a certain place and [face] social constructs where you can’t express yourself,” Matteson said.

Matteson and invoke have performed around the country in states such as Texas and California. At The Clarice on Tuesday night, children were offered earplugs to wear, as well as fidgeting devices — such as boas, ribbons and stress balls — to keep them focused. There was also a quiet, secluded area for children to go to if needed.

Kathy Dow-Burger, co-director of the University of Maryland Autism Research Consortium, has worked in the speech pathology field for more than 25 years and has experience with individuals on the autism spectrum, from toddlers to adults.

She said sounds and lighting associated with the traditional concert experience can all be bothersome to individuals with autism.

“It’s isolating to some families because they can’t enjoy, with their entire family, an experience like this,” she said.

Smells such as cologne, perfume and scented lotions that people often wear to a concert venue can also be irritants, she said.

“Some people are hyposensitive, where they’re actually sensory-seeking. Other people are hyper-sensitive, so lighting can be a barrier from people enjoying a concert,” Dow-Burger said.

Dow-Burger has been working with The Clarice to plan this event since last spring and used her expertise address the needs of the event’s target audience.

“This is an outreach that a lot of people haven’t explored,” she said. “It’s about time.”

Jane Hirshberg, assistant director of campus and community engagement at The Clarice, said she was excited to be partnering with invoke and UMARC to make performing arts accessible to a broader community.

“It’s kind of incredible to see the kids freeing themselves and getting involved with the music in a totally different way than maybe you or I would do, because they are sensing it in a whole different way,” Hirshberg said. “Being in the audience today, and talking to some of the teachers who were clearly just completely delighted with seeing the transformation of their students, was an indescribable feeling.”

Zachary Tumlin, an information studies graduate student, is an autistic self-advocate. He started a support group on campus for autistics, in which he pushes and teaches self-advocacy.

“Parents are worried about going out in public and the child doing something that would not be well-received,” Tumlin said. “Rather than risk that, they stay inside, and then the child is deprived of these experiences that other children get.”

Matteson said that invoke plays their music as usual, but they tailor the concert experience to their audience by making the setting as accessible as possible. The string quartet has partnered with various organizations that are connected to the autism community, such as the Central Texas Autism Center.

The first time invoke played for an audience in this community, they knew it was something they wanted to start doing as much as possible, since they received the largest amount of audience reaction they’d ever gotten.

While invoke does put on traditional concerts as well as sensory-friendly events, they are hoping to integrate factors of both to make all of their performances available to a broader community.

“We’re kind of hoping that as we progress as an ensemble, that we actually start blurring those lines so that everybody feels like they can come to any one of our concerts and feel like they can be there and express themselves in any way they want to,” Matteson said.