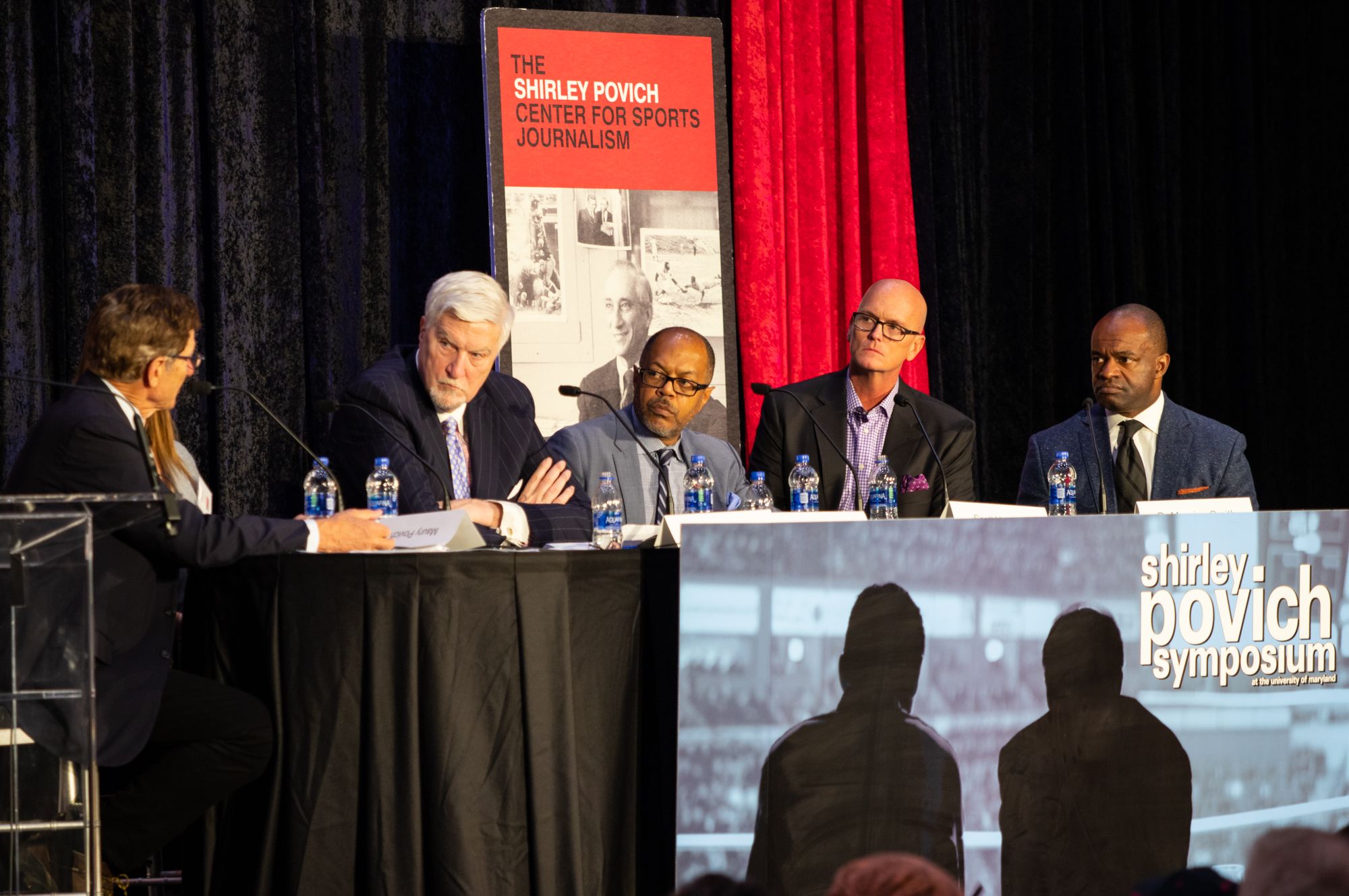 The University of Maryland hosted the 13th annual Shirley Povich Symposium at the Riggs Alumni Center. The panel's discussion topic focused on the role of race in sports. (Evan Kramer/The Diamondback)

A member of the commission that investigated the culture of Maryland’s football program said at a sports symposium that the issues with the team weren’t based on race.

“There were a lot of people that were pro-the program and there were some that were against it,” said former Congressman and Maryland basketball player Tom McMillen at Tuesday’s Shirley Povich Symposium. “There was not a lot of race injected in this.”

McMillen was among a panel of five experts in journalism, athletics and player management to discuss racial issues and sports as part of the symposium in Riggs Alumni Center.

The panel came five months to the day after Jordan McNair, a rising sophomore offensive lineman, died of heatstroke he suffered during a team workout. The death of McNair, who was black, spurred two external investigations: one looking into why he contracted heatstroke and the other into allegations of a “toxic culture” within Durkin’s program.

As part of its investigation, the commission ran an anonymous online survey, which was taken by 94 of the 112 players — 28 of them white, 66 of them nonwhite. The nonwhite players, on average, gave Durkin a 3.1 out of 5 rating, while the white players gave him a 2.9.

McMillen alluded to the survey at the panel, noting that “as a matter of fact, coach Durkin did better with the African-American players than he did with the white players.”

“The problems were not necessarily race-oriented,” he said. “We talked to a lot of folks, and that was not our conclusion.”

Scott Van Pelt, an alumnus of this university and a sportscaster and sports talk show host on ESPN, agreed with McMillen.

Although he admitted he knew former Terps coach Ralph Friedgen much better than he knew Durkin, Van Pelt said he saw nothing atypical when he attended Durkin’s practices, and that he believed race didn’t play a role in McNair’s death.

“I was pleased from what I gathered from the commission’s report that I read, that coach Durkin actually had quite a bit of support within the program from African-American players,” Van Pelt said.

Van Pelt has been critical of Maryland’s leadership in the fallout of McNair’s death. Most recently, on Nov. 2., he called for the administration to clean house.

Shirley Povich wrote for a number of years about the Washington Redskins, the last franchise in the NFL to include black players. He might have been frustrated that, years later, racial issues in sports would persist to the degree that they’d be a topic for a panel discussion, his son said.

“My father was writing about these challenges and inequities in the 1930s,” Maury Povich said, “He died in 1998, hoping in the ensuing 20 years after that, we wouldn’t be here talking about race in sports.”

DeMaurice Smith, a panelist and the executive director of the NFL Players’ Association, said racial issues in sports will never disappear.

“In sports,” Smith said, “we always see a microcosm of what’s going on in our country.”

Kaepernick has yet to find another NFL job since becoming a free agent after the 2016 season. Smith is leading a lawsuit against the league alleging that NFL owners colluded to prevent the former 49ers quarterback from signing with a team.

“I’ve worked for law firms, and the Department of Justice,” Smith said, “and I didn’t start any of my days standing for the national anthem. Just saying.”

Hannah Fields, a sophomore journalism major, said “everyone kind of knows” that race and sports have been intertwined for years.

“The way our country is divided right now, I don’t see it mending any time soon,” she said. “That we’re still having these racial issues in sports is a little piece of what’s happening in society right now.”

Chelsea Janes, who covers the Washington Nationals for The Washington Post, added perspective on race in baseball. The sport has an ever-growing Latin contingency, while 8.4 percent of the majors are black, the most since 2012, MLB announced in April.

“[Baseball is] still about, ‘Oh, Latinos play the game differently,’” Janes said. “This guy flipped his bat, and the white guy over here says, ‘That’s not how we do it.’ It’s like, how backwards can you be that that’s where we are, right?

For Stacey Cabrera, a sophomore psychology major, she chose to attend Tuesday’s event because of its relevance to her life.

“I’m a sports fan and Mexican-American,” she said, “so race is a huge factor for me.”