Review: ‘Super Drags’ entertains, but to too small an audience 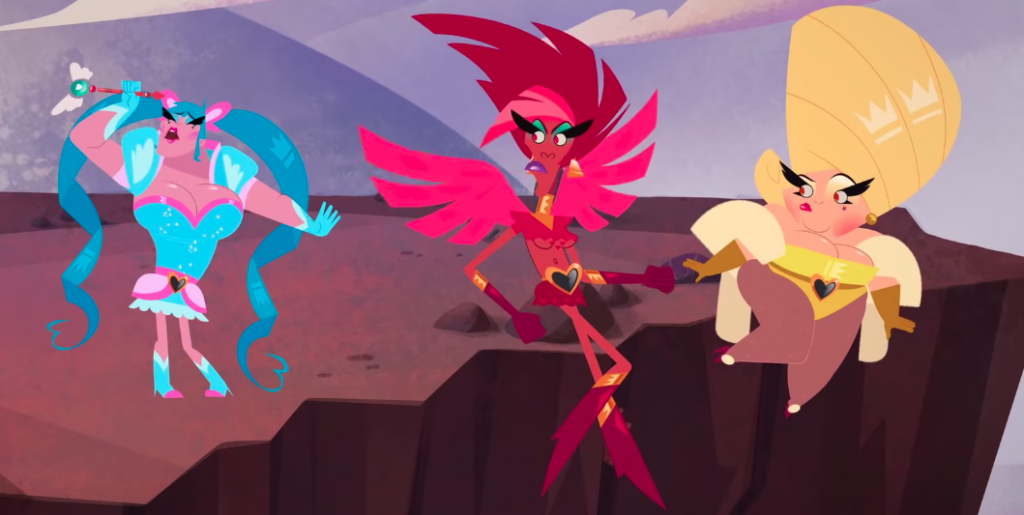 If you’re a fan of vulgarity, superheroes or RuPaul’s Drag Race, you’ll probably enjoy Netflix’s newest Brazilian cartoon, the whimsically mind-numbing Super Drags. If not, then you’ll probably want to skip this one.

Set in the fictional town of Belt Buckle Bay, the show follows three everyday department store workers — Patrick, Donizete and Ralph — as they tolerate the trials and tribulations of life in customer service while secretly leading double lives as the crime-fighting trio known as the Super Drags.

The trio is made up of Patrick’s drag alter ego Lemon Chiffon (Ginger Minj of RuPaul), Donizete’s alter ego Scarlet (Shangela of RuPaul) and Ralph’s alter ego Safira (Rod Keller). Other RuPaul alumni on the show include Willam Belli as the villainous Lady Elza and Trixie Mattel as the trio’s boss, Champagne.

The show beautifully rears up against several destructive stereotypes normalized by the queer community. When Patrick is stood up by a date because he doesn’t fit the idealized gay body type, the message relayed is that beauty comes from one’s inner self, rather than physical appearance. When Ralph’s family rejects him for his sexuality, we’re assured that queer people can find family within their community. The affirmations made to the queer community are subtle, yet comforting.

Most of Super Drags’ problems stem from the disjointed and hole-ridden plot. While the show isn’t terribly complex, some aspects don’t piece together cohesively, in a way that a few simple edits could resolve. When Lady Elza steals the “highlight” from gay people in Belt Buckle Bay, the Super Drags don’t always save them, and the fact that that these people were harmed and never helped is brushed off.

The comedy is brash, blunt and delivers most of the time. But anyone unfamiliar with queer culture go-tos that are referenced frequently — like Lady Gaga in A Star is Born or the assumption that Shawn Mendes is queer — will not find the comedy appeasing.

[Read more: Review: ‘This One’s For The Ladies’ tells the stories of black male strippers]

Although Super Drags sets an achievable goal of catering to the guilty pleasures of queer culture, failing to appeal to a wider audience may be its downfall. The show is a niche comedy that’s about as sophisticated as its title suggests. It’s just dumb, inappropriate bits of cheeky humor sewn together with name-drops on name-drops of pop culture references every self-respecting queer person will know.

When you start analyzing the plot too seriously, your interest will start to dwindle. Just let your eyes glaze over and enjoy as the neon world of beauty and bulges take you away.