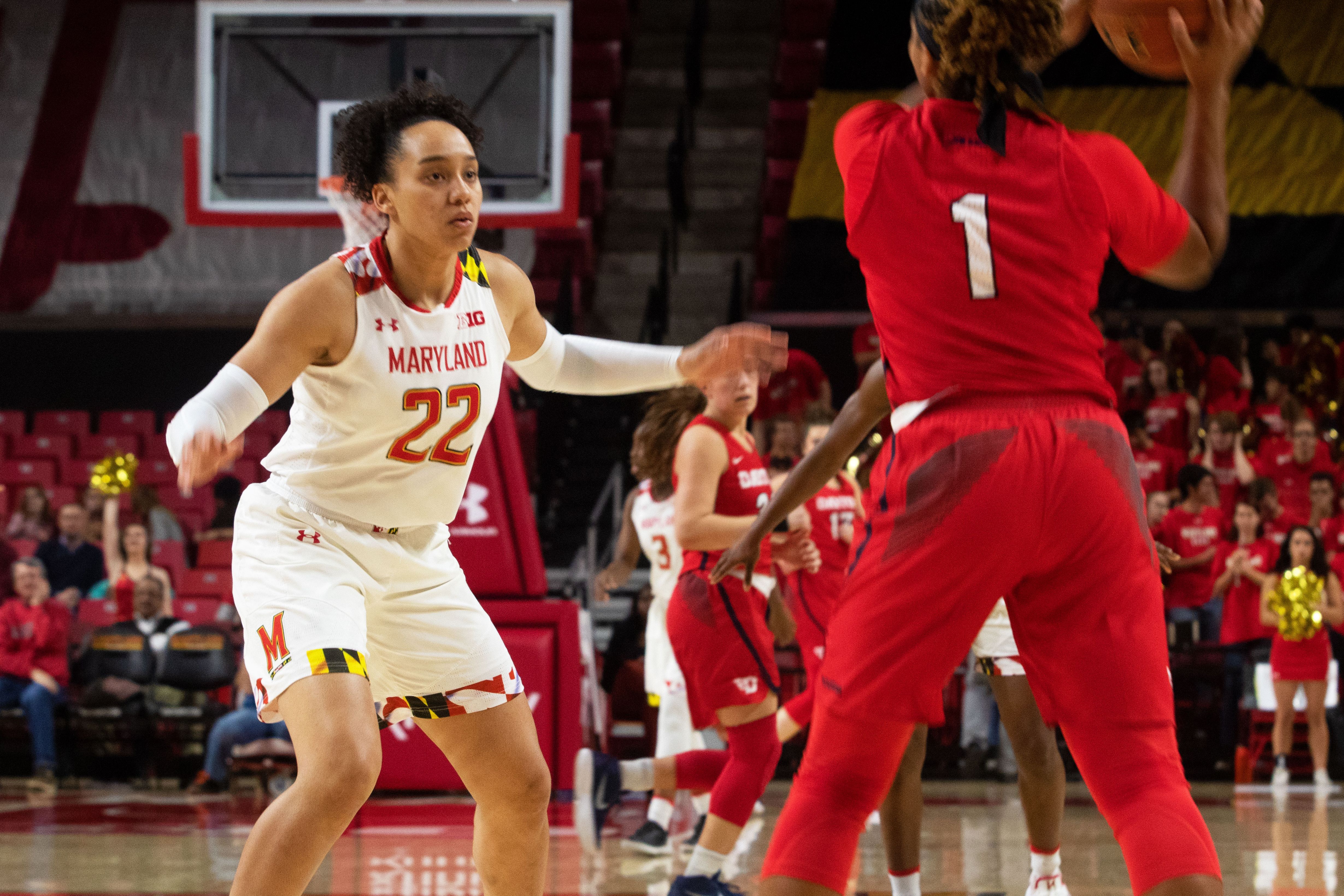 In the blink of an eye, guard Blair Watson took control.

Watson cut along the baseline and lost her defender, and guard Taylor Mikesell found her in the right corner for an easy 3-pointer to put the Terps up 10-8, their first of the game.

Then, Maryland’s frenetic full-court press forced an errant inbounds pass that ended up in the hands of Watson, and she drained a nearly identical three-point shot from the right corner later in that possession.

The junior didn’t stop there. Immediately after the back-to-back triples, she picked guard Araion Bradshaw’s pocket in the backcourt and took it to the basket to cap off a personal 8-0 run in just 32 seconds. The Terps ended the quarter on a 25-3 run, demoralizing the upset-minded Flyers en route to an inconsistent 82-71 win that showed improved shooting but poor ball security compared to the season opener.

“I’m proud of the fact that we came out and punched first,” coach Brenda Frese said. “The first quarter is how we want to play consistently for 40 minutes. But I thought the rest of the game, we’ve got to get a lot more consistent when it comes to taking care of the basketball.”

In its first game against Coppin State on Friday, Maryland shot just 38.6 percent from the field. But against Dayton, the Terps shot 55.9 percent, and the biggest adjustment was in shot selection. After taking 28 3-pointers against the Eagles, Maryland went 4-for-8 from long distance Sunday.

Guard Kaila Charles was the leading scorer with 22 points, six rebounds and four assists. Her 16 first half points were crucial in the Terps’ double-digit halftime lead, but she managed just six points on 2-of-6 shooting after the break.

“I was running hard in transition [in the first half] and my teammates were giving me the ball,” Charles said. “And it’s kinda easy to make layups when you’re wide open and your teammates are feeding [you].”

Still, largely due to the Terps’ 24 giveaways, the Flyers hung around. Dayton went on an 8-0 run to cut the Terps’ lead to 47-38 after halftime, and a 7-0 run late in the fourth quarter again made the scoreline more respectable.

Watson’s flurry in the first quarter provided the blueprint for Maryland to keep the Flyers at bay. Her two steals in the sequence were a byproduct of the Terps’ pressure, and the defensive intensity caused Dayton to turn it over 20 times.

After the game, the junior could barely recall the production.

“I don’t even know where it even came from honestly,” Watson said. “My teammates just gave me that energy and that surge to say, ‘Let’s go, let’s get it.’”

Maryland scored 38 fast-break points and 28 points off turnovers while limiting Dayton to 19 points off the Terps’ 24 turnovers.

Most of the Flyers’ giveaways occurred in dangerous areas of the court, while many of Maryland’s were thrown out of bounds on the fast break, mitigating the damage caused by the miscues.

That built a large enough lead to weather a late surge from Dayton as Maryland’s shooting went cold down the stretch. The Terps didn’t score for the final 2:34 and turned the ball over three more times, limping to the end of an inconsistent performance.

“We weren’t getting pressed until the end, so I thought a lot were unforced turnovers, trying to maybe do too much on the offensive end,” Frese said. “The positive thing is I think we can definitely clean that up, and as we get more reps together I think we’ll drastically improve.”