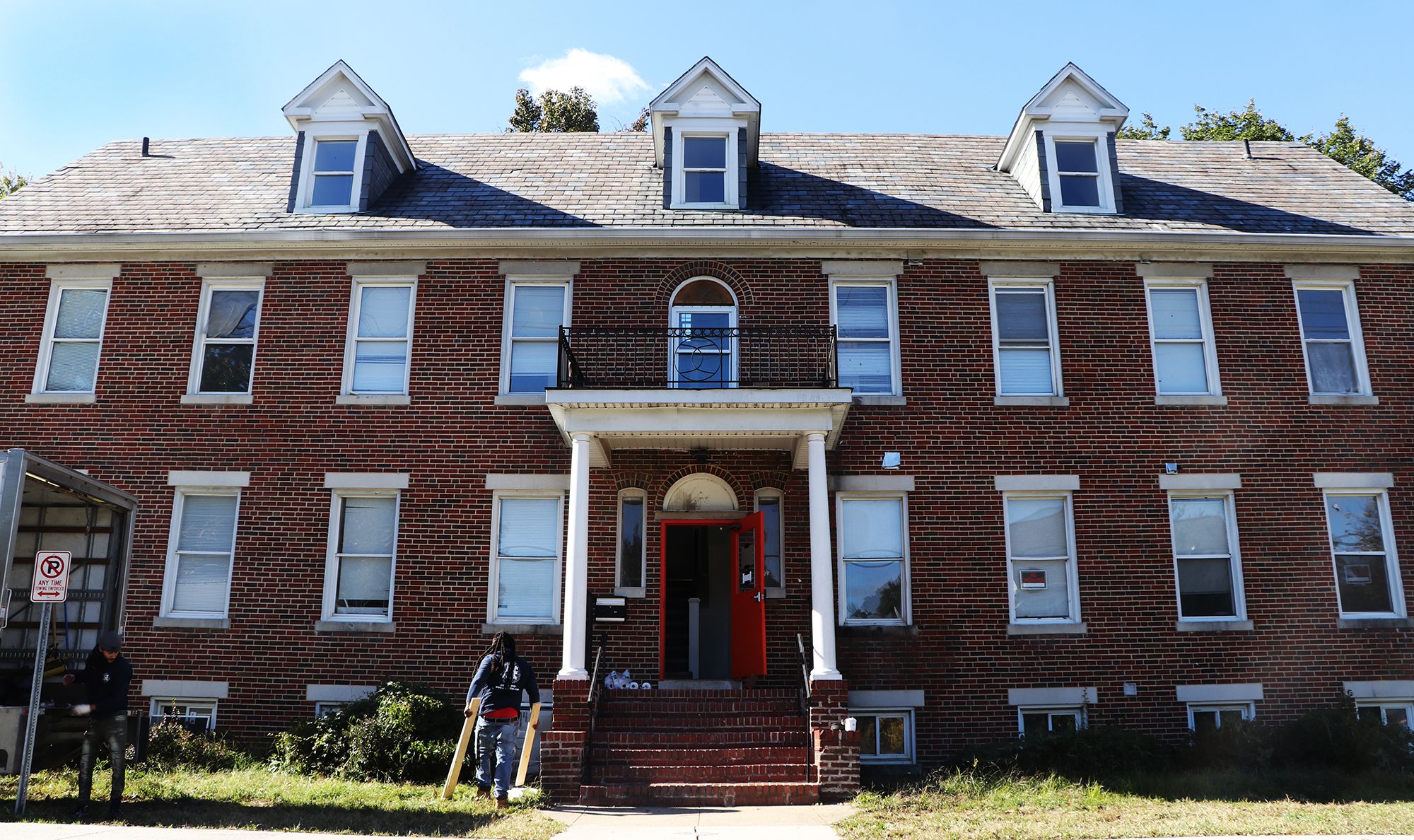 Men are discarding items from inside a house that students were evicted from. (Julia Nikhinson/The Diamondback)

Residents of 4619 College Ave. in College Park didn’t notice anything out of the ordinary when they moved in before the fall semester began.

Their landlord, Tom Chen, was doing everything a landlord typically does when new tenants move in. He accepted the residents’ security deposits, met them when they moved in, changed locks and gave them tours of their new home.

There was just one problem — Chen was deep in the process of losing ownership of the property, known by many as “Complex.”

The longtime College Park landlord, whose history of code violations came to light during his failed mayoral campaign in 2017, had unpaid tax obligations from 2015 of nearly $10,000.

An investment company called Midaro Investments 2016, LLC bought the property in a May 2016 tax sale. This June, Chen lost his right to redeem the property — which would require him to pay the original obligation and additional fees — and on Aug. 15, the deed was transferred to Midaro, according to court documents and a real property search.

The former tenants — many of whom belong to the University of Maryland chapters of the Tau Epsilon Phi and Sigma Nu fraternities — were evicted on Oct. 19.

The Diamondback spoke to four of the residents — all students at this university — who described a disruptive housing situation with Chen and their house’s new owner, Midaro, as the property changed hands and they were subsequently evicted.

Each of the former tenants who spoke have ongoing litigation with Midaro. They were granted anonymity because they fear possible retribution, whether in additional financial damages or some other form.

Online court records showed 37 people listed at that address had cases of “forcible entry and detainer” — a common eviction action — filed against them. Five of those cases are closed, while 32 await a Nov. 15 trial date, according to the records.

Aside from those cases, two other students have separate claims against Midaro and Chen, respectively, according to court records.

The residents said the new landlord wanted them to sign a lease that would bring new problems. It would make them liable for problematic existing conditions — including a lack of heating, ventilation and air conditioning — and would prevent visitors after 11 p.m., according to a copy of the lease obtained by The Diamondback.

The tenants who spoke each said they first learned the property had been sold to Midaro about two weeks into the semester, when notices started appearing on the house’s doors stating that Chen was no longer the owner.

Midaro filed a writ of possession on Sept. 10, according to Prince George’s County Circuit Court documents. While the company had already gained ownership of the property, this writ would allow it to evict the residents.

After taking possession of the property, Midaro informed the residents — in a letter dated Sept. 18 — that they’d have 30 days to move out. At that point, many of them had already paid Chen security deposits of $1,700, the equivalent of two month’s rent, they said.

When they didn’t want to submit to the new owner and sign Midaro’s lease, paying an additional $900 security deposit, they were kicked out.

“Absurd lease,” said one of the evicted residents, a senior real estate development major. “It was literally his way or the highway, and he threw us out on the streets with no regard.”

Unwilling to sign Midaro’s lease — which would have run through May — some of the residents said they sent in their first month’s rent checks to Midaro in good faith. They attempted to renegotiate some terms of the lease, at the very least, to attempt to work out a deal that allowed the tenants to remain in the property through December.

But Gary Berman, the resident agent representing Midaro, did not cash the checks, the resident said. Berman told them they had two options: sign the new lease or move out.

Unable to make a deal, residents said they were given only a few days’ notice before they were evicted. One of the residents who spoke, who is undergoing cancer treatment, said in a message he wasn’t given more time to do so.

For some of the evicted tenants, the stress couldn’t have come at a worse time. Many of the residents had multiple exams scheduled during the same week they were evicted.

“It’s hard to focus when you don’t know where you are going to sleep at night,” said another evicted resident, a senior economics major.

Berman, citing his office policy of not commenting on client matters, declined to comment via email. Berman was also unavailable for comment during a visit to his law office in Pikesville.

In addition to Midaro, Berman is also listed as the resident agent for several other LLCs. Online court records show more than a hundred tax sale cases Berman litigated similar to this one.

Investment in tax lien property — what occurred with Chen’s property — can be lucrative for investors, as they can collect past money owed and additional interest. And in Prince George’s County, that interest rate stands at 20 percent.

A city property inspection report, dated Sept. 7, detailed 35 code violations for the property. A nearly 90-year-old multi-family home, it had some sunken floorboards, no hot water in its bathrooms, water leaks and a smoke alarm in disrepair.

Every rental property in the city must pass a residential inspection before an occupancy permit — which lasts for one year — can be issued, according to city code.

The rental property also had more than double the number of permitted tenants. The number of people authorized to to live on this property was limited to 16, Ryna Quiñones, a city spokesperson, wrote in an email.

Quiñones also wrote that, since the occupants had already been evicted and the building was now “vacant and secured,” an Oct. 19 inspection was canceled.

John Rigg, a District 3 council member, said the city takes precautions to protect tenants from poor and unsafe rental conditions: each rental property must have an annual inspection, and tenants can report code violations to the city for additional inspections any time.

Rigg added that overcrowding can be a result of residents trying to split costs by inviting others to move in or landlords trying to maximize profits.

“I’m sure it probably happens both ways,” Rigg said.

Chen, who unsuccessfully ran to be College Park’s mayor last year, has been a landlord in the city for more than 20 years. His properties have accumulated numerous code violations and condemnations over the years. The “Complex” was condemned from June 2015 to August 2017.

Some of the evicted residents said they were aware of Chen’s history of issues with his properties but wanted to give him the benefit of the doubt. Tau Epsilon Phi members have rented this same house in the past, and their friends who rent from Chen’s other properties have not had significant issues with the landlord, the residents said.

“He just ran for mayor for College Park, so we thought maybe he was in good standing now and his reputation might have changed,” the senior economics major said. “We had never worked with him, so we were kind of hoping for the best.”

Alex Tobin, the student liaison to the city’s council, said the poor property conditions aren’t uncommon in the city, but some students — fearing retribution from their landlord, or consequences from the city — are hesitant to report code violations.

And the lack of affordable off-campus housing puts students looking for cheaper options at risk, he said.

“There are some students who can’t afford those market rate apartments,” Tobin said. “Those students who often need affordable options are the ones who are victims of predatory landlords in Old Town.”

Despite the red flags that their property wasn’t in ideal condition and Chen’s history with College Park properties, some of the evicted residents said the opportunity to live at “Complex” was too good to pass up.

“College Park housing is so limited, so narrowed, you don’t really have a choice where you live,” said one of the evicted residents, a senior accounting and finance major. “Just getting a house like this was something that we were shocked about.”

The senior fraternity member said the eviction process put a “damper” on his senior year, a year he expected to enjoy living together with his fraternity brothers.

“Our main priority going into this was all living together and finding a cheap place to live,” he said. “It didn’t really matter the conditions of the current house — we were just very happy to live together. It kind of just sucks that I guess that was taken from us.”

Chen has been “unresponsive” and “evasive” during the process, the senior accounting and finance major said. “We consider our deposits with him gone,” he said.

Ryan Lewis, Chen’s lawyer, said Chen declined to comment for the story on his advice. Lewis said he was waiting on a spreadsheet from one of the evicted residents with total money owed, and that those who had paid Chen and were evicted can expect a refund soon.

“The goal is to get everybody their money back by next week — the end of next week,” Lewis said in an interview on Oct. 25.

However, as of Sunday, Chen’s former tenants said they have not been reimbursed.

In an email, Lewis said that Chen had to unexpectedly return to China on Oct. 28, so “everything is currently on hold” until he returns, he wrote. Lewis did not provide a date on when he expected Chen to return.

“I am really anxious to get the students refunded,” Lewis wrote in the email.

Although some of the evicted students interviewed for this story did not want to disclose where they were now living, one said he found a temporary home in the Monument Village apartments.

It’s a big change from his previous home at “Complex” — they now have a near two-mile commute to campus — but some enjoy the change.

“A lot of us are very happy and have not experienced living in a place that sort of caters to us,” the senior accounting and finance major said. “A lot of us are shocked to find that we can get coffee in the morning for free.”

For some of the evicted residents, living at 4619 College Ave. was the first time they had signed a lease and lived on their own off-campus. And they said it was a costly lesson.

“We basically learned a lot of responsibility,” the senior accounting and finance major said. “We learned maybe not to trust people on first hand and if something is too good to be true maybe it actually is.”