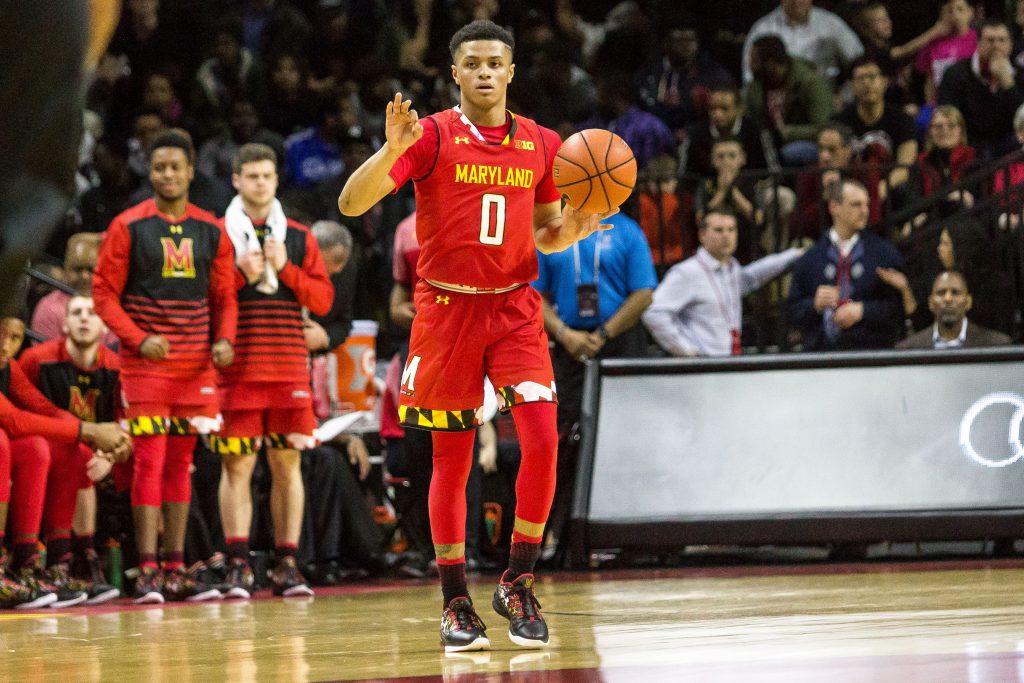 Guard Anthony Cowan calls a play while bringing the ball up the court in Maryland’s matchup with Rutgers on Feb. 28 at the Louis Brown Athletic Center. (Marquise McKine/The Diamondback)

ANNAPOLIS — Finally, midway through the second half against Navy on Tuesday, Maryland men’s basketball had regained control and gotten some energy.

A pair of Midshipmen turnovers — one around midcourt, one deep in their own backcourt — had given Darryl Morsell a transition dunk and layup in the span of about a minute, putting the Terps up by nine and drawing roars from forward Bruno Fernando on the other end of the floor.

Before then, nothing had come easy for the Maryland offense. The Midshipmen erased an eight-point deficit with a 10-2 run to start the second half, and the Terps went back-and-forth with them for the next few minutes.

But the two giveaways — one essentially unforced and one on a strip by Cowan — helped the Terps reopen a nine-point lead. Navy never replicated the type of run that got them back in the game right after intermission, and Maryland pulled away late for a 78-57 win in Annapolis.

“Mentally, we weren’t ready to play the second half,” coach Mark Turgeon said. “After that, we were great.”

Just like in the season opener, Maryland struggled on offense Friday. The Terps needed eight points in the final four minutes of the first half to take a 33-25 lead into the locker room.

After going 0-for-5 from beyond the arc Tuesday against Delaware, Cowan missed his first three long-range efforts Friday. When he finally made one, during the burst of offense at the end of the first half, he turned to his bench, flexed and let out a smile, a departure from his typically stoic on-court demeanor.

“Obviously I struggled in the first game and still struggled this game,” Cowan said. “Seeing the ball go through the basket … took kind of a load off my shoulders.”

Cowan flexed again after center Jalen Smith converted a layup with 10:15 remaining in the second half, one of the junior’s six assists Tuesday. And as the Terps pulled away in the final minutes, Cowan poured it on, hitting his last four field goal attempts to build on his game-high 24 points.

But before those late scores, Maryland again struggled with a zone defense. The Terps couldn’t shoot over the Midshipmen zone and weren’t going inside, either.

So when Navy came flying out of the locker room in the second half, Maryland was tied 39-39, in a battle with an opponent it should’ve beaten handily.

“Was I a little worried? Yeah,” Turgeon said, “because we just continued to not make jump shots.”

Ultimately, Maryland’s defense and foul shooting meant it overcame another cold shooting night. The Terps went 23-for-27 from the foul line and held Navy to 36 percent from the field.

That defense forced 17 turnovers and led to Morsell’s two transition scores — four of his 15 points — which ensured the Midshipmen would never lead Friday.

“We needed to make one play to kind of get the rim small for them,” Navy head coach Ed DeChellis said. “It was tied and we couldn’t make the play. … Now you look up and you’re down finally, it’s a little different.”

Once the Terps distanced themselves in the second half, they hit the gas, finishing the game on a 18-5 run to make the scoreline look like a blowout. Maryland went 15-for-27 from the field in the second half, after shooting 31 percent before halftime.

Smith scored 11 points, and Wiggins hit a late triple to finish with 12, giving the Terps four players in double figures.

But Maryland’s offense was still almost nonexistent for too long Friday. So the team skated by on the strength of its defense — and the weakness of its early-season opponent — to take another win that was closer than it should’ve been.

“For us to not be shooting the ball well these first two games, but we still locked in defensively, shows a lot about this team,” Morsell said. “We start hitting shots … it’s gonna be fun.”