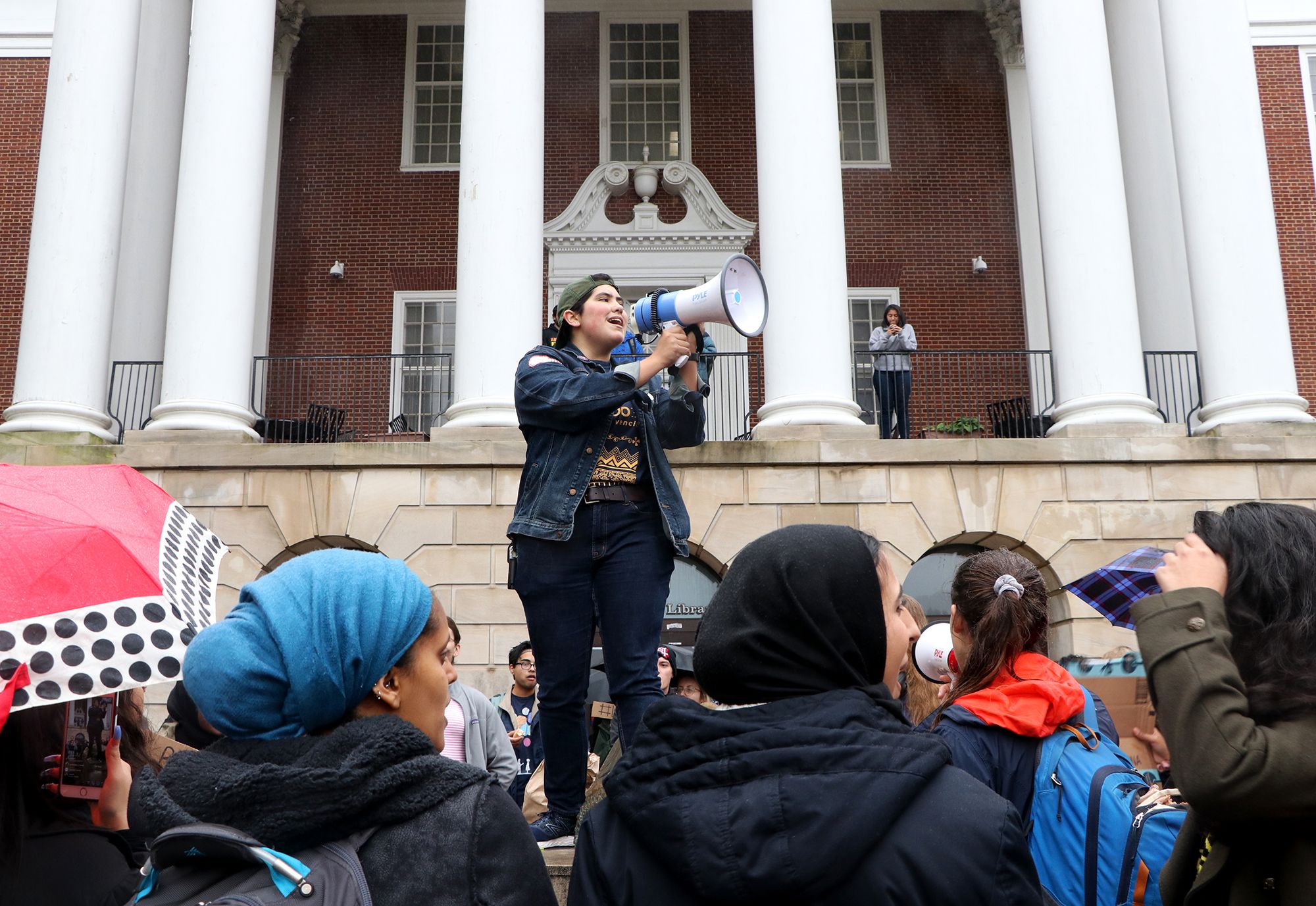 Paula Molina Acosta, vice president of Political Latinxs United for Movement and Action in Society, addresses a crowd at the “Fire the Liars” rally on Monday, Nov. 5, 2018. Many students at the protest expressed outrage about the University of Maryland's active contract with Immigration and Customs Enforcement. (Julia Nikhinson/The Diamondback)

University of Maryland students are expressing outrage at the revelation that the school has an active contract with the agency in charge of enforcing President Donald Trump’s hardline immigration policy.

The university’s contract with Immigration and Customs Enforcement provides the agency’s officials with “cultural competency and counterterrorism” training from this university’s National Consortium for the Study of Terrorism and Responses to Terrorism, according to university spokesperson Jessica Jennings.

The contract, worth up to $625,000, is with the agency’s Homeland Security Investigations division. It is distinct from the Enforcement and Removal Operations division, which is in charge of detaining and deporting undocumented immigrants, Jennings wrote in a statement.

Still, many students have called on the school to divest from its contract.

“They’re getting money from an institution that is committing cruelty,” said Blanca Arriola Palma, the president of Political Latinxs United for Movement and Action in Society. “I don’t think that it matters what the contract is about itself — I just think the university shouldn’t be associated.”

PLUMAS is one of the many groups that participated in Monday’s “Fire the Liars” rally calling for reform of the university’s administration amid what they see as the lack of official response on race and diversity issues that have plagued the campus in recent years.

During the rally, several speakers called on the university to end its contract with ICE.

“The administration hasn’t taken much effort in stopping hate bias incidents, and keeping those who commit them accountable,” said Arriola Palma, a senior government and politics major. “With ICE, it’s the same thing happening. The university hasn’t taken a clear stance on how far they’ll go in protecting undocumented students.”

But Jennings wrote that the university’s “values of diversity and inclusion” and “commitment to our students” are the reason “that we do the work that we do, in the way that we do it.”

In January 2017, under threat of losing federal funds, university President Wallace Loh shot down a request from ProtectUMD — a coalition of 25 student groups working to aid marginalized groups on the campus — to deem the university a sanctuary campus, which would prevent ICE officials from entering without a warrant. In a letter released at the time, he said the measure was unnecessary.

Chants of “ICE must go, so must Loh!” echoed across McKeldin Mall on Monday at the rally, where speakers emphasized what they saw as the administration’s failure to advocate for minority groups. They cited the response to the deaths of 2nd Lt. Richard Collins and football player Jordan McNair, both of whom were black.

Collins, a visiting student from Bowie State University, was fatally stabbed on this campus in May 2017. Sean Urbanski, a white former student of this university, is awaiting trial on murder and hate crime charges in connection with the killing, which occurred amid a spike in hate bias incidents across the campus.

McNair, a rising sophomore offensive lineman, died in June after suffering heatstroke at a team workout two weeks earlier, where athletic trainers failed to treat him properly. The university has received criticism for its response to McNair’s death, with a report last week detailing widespread dysfunction and abuse within the athletics department.

Paula Molina Acosta, a junior women’s studies major and the vice president of PLUMAS, said the ICE contract was one of the driving forces behind Monday’s rally.

She said it didn’t matter that the contract was not involved with the deportation process, calling ICE “morally corrupt.”

William Braniff, the director of START, said the training they provided to ICE officials was “lecture-based,” and taught Department of Homeland Security investigators how extremist groups around the world use rhetoric to radicalize people.

The group has no current plans to end the contract, he added.

The current contract, which began in July 2017 and is set to expire in 2022, is not the university’s first contract with ICE.

The Maryland Fire and Rescue Institute was also awarded a contract with ICE that month, for “services related to hazmat technician certification and training,” ICE spokesperson Matthew Bourke wrote in a statement. The contract expired in September of this year.

Since taking office in January 2017, Trump has pledged to crack down on undocumented immigrants. His administration’s “zero tolerance” policy led to thousands of migrant children being separated from their families at the border.

While ICE was not in charge of the family separation policy, it sparked several municipalities — including the city of Philadelphia and nearby Fairfax County, Virginia — to sever their relationships with the agency, which relies on local jurisdictions to detain immigrants it suspects may be in the country illegally.

Prince George’s County and the University of Maryland Police “do not honor ICE detainers without a warrant,” a university police spokesperson said in a statement.

However, University Police cannot prevent ICE from conducting operations within the city, the spokesperson said. In 2016, ICE officers conducted an armed raid of nearby Langley Park, despite Prince George’s County’s “sanctuary county” label.

“It’s truly a terrible organization,” she said. “It represents the moral failings of this university, and every person associated with it.”