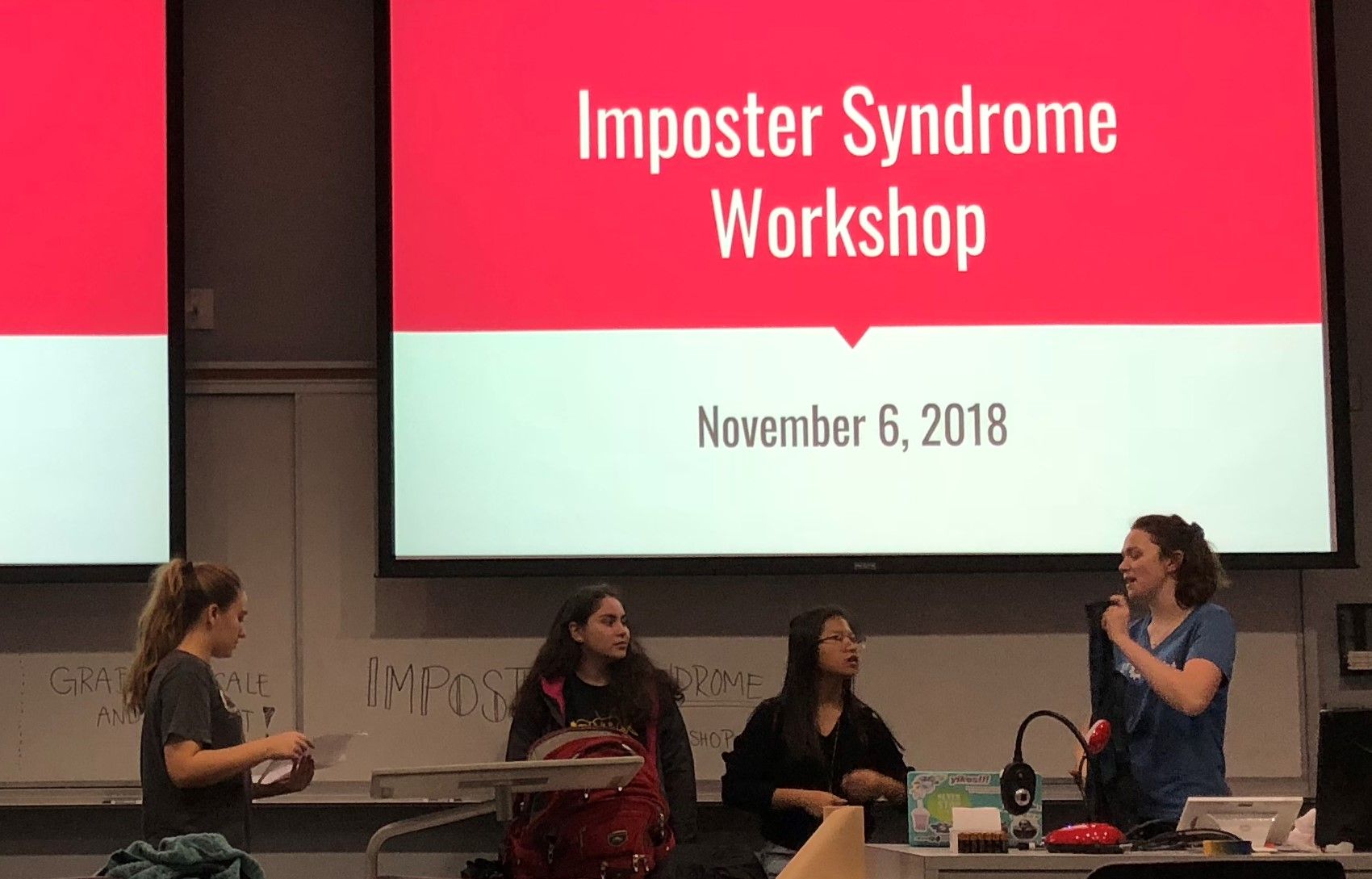 University of Maryland students discuss imposter syndrome, a psychological phenomenon that causes individuals to doubt their accomplishments and induce anxiety, at a workshop on Tuesday, Nov. 6, 2018. (Iris Vukmanovic/For The Diamondback)

Madison Kaczorowski had never heard the term “imposter syndrome.” She didn’t even know it was an established concept.

But after reading the description — a psychological pattern that makes personal accomplishments in school, work and other areas feel like they were earned by luck rather than merit or hard work — the freshman engineering major said she immediately related to it.

“I was like, ‘Wow that actually describes me perfectly,’” Kaczorowski said. “I just wanted to come and learn more about it.”

Kaczorowski attended a workshop organized by students at the University of Maryland on Tuesday to better understand the feeling known as imposter syndrome, chiefly how it affects women in STEM.

[Read more: UMD will no longer bar students from their dorms after mental health hospital stays]

Rachel Walter, a junior computer science major, said the workshop was meant to focus on gender empowerment while identifying an issue related to gender and organizing an intervention to combat it.

The workshop began with students taking the Clance IP Scale, a survey that measures the imposter phenomenon. The survey contains statements such as “I’m afraid people important to me may find out that I’m not as capable as they think I am” and “I can give the impression that I’m more competent than I really am.”

Students rate how applicable each statement is to them on a scale from one to five. A score below 40 indicates the person possesses few traits of the phenomenon, while scores between 61 and 80 indicate a person has frequent imposter phenomenon experiences.

The most extreme score — anything more than 80 — indicates the most intense feelings of doubt and inadequacies. The higher the score, the more seriously the phenomenon interferes with a person’s life, according to the test.

The workshop leaders facilitated discussion among students to share their experiences with imposter syndrome.

“It’s a term referred to [as] consciousness raising,” Walter said. “By talking about an issue, you realize it’s not an individual issue — it’s a greater societal issue.”

Walter said she was happy to see men, women and people from different backgrounds and majors come to the event, even though it was geared more toward women in STEM.

“[It’s] super uplifting,” said Walter. “And once again shows that it is a universal issue.”

Senior computer science major Dan Selzer said he came to the workshop because applying to jobs this year has been harder than last year for him, and he’s felt discouraged.

“I have recently experienced some imposter syndrome,” Selzer said, “because I’ve been applying for jobs and getting so many rejections and things like that. To learn about possible ways to approach it would be useful.”

There are several different ways to help curb the negative feelings that come from imposter syndrome, Walter said. Reframing certain thoughts more positively and questioning whether thoughts are harmful can change the way people think about their achievements.

Walter also emphasized self-advocacy, such as sharing successes with others in the same way people discuss those who are already successful.

Finding people to relate to by talking to friends or family, or finding mentorship can be powerful ways to help, too, she added.

Selzer said the workshop encouraged him to talk more to people about his feelings and imposter syndrome in the future.