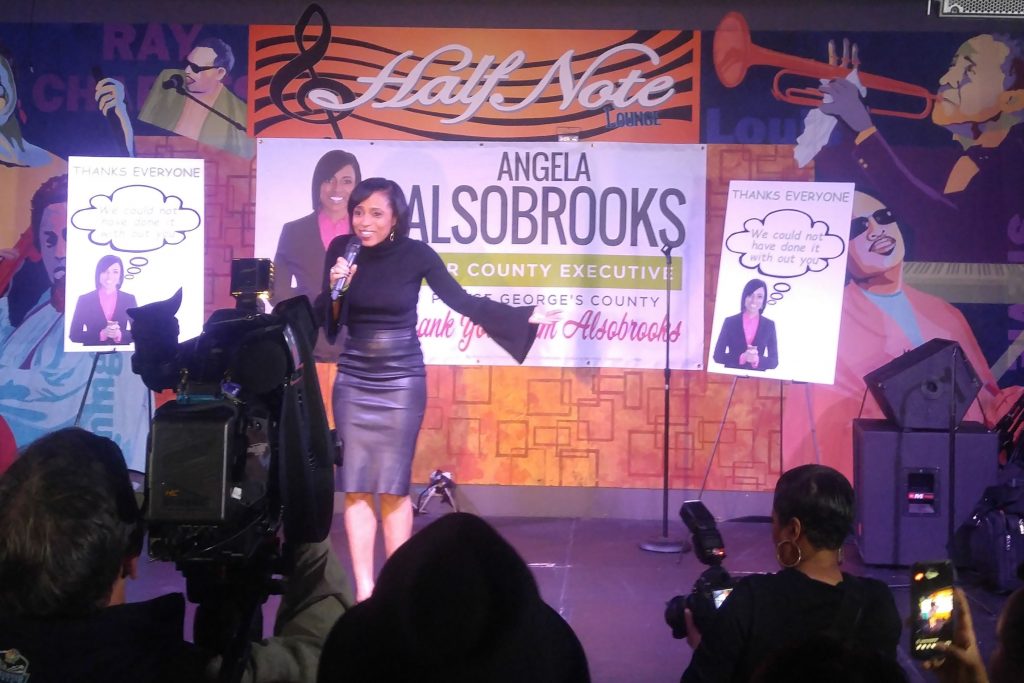 Angela Alsobrooks celebrates at the Half Note Restaurant and Lounge in Bowie after winning the Prince George’s County executive race on Nov. 6, 2018. (Horus Alas/For The Diamondback)

Prince George’s County State’s Attorney Angela Alsobrooks was elected the county’s next executive Tuesday after running unopposed, becoming the first woman ever to win the seat.

Alsobrooks succeeds fellow Democrat Rushern Baker, who had served the maximum two terms as county executive. No one stepped forward for the Prince George’s County Republican party after its candidate, Jerry Mathis, withdrew from the race, leaving Alsobrooks to garner 98.9 percent of the vote with 272 of 274 precincts reporting.

Since Prince George’s County adopted a charter form of government in 1970, it’s had seven county executives, all of them men. When Alsobrooks is sworn in next month, she’ll become the first woman and the sixth Democrat to hold the position.

“This has been the greatest honor of my life,” Alsobrooks said at an election party Tuesday night at the Half Note Restaurant and Lounge in Bowie.

In 2010, Alsobrooks was elected the county’s state’s attorney as the only major-party candidate. Baker, also running unopposed that year, was elected County Executive. Both earned re-election in 2014 as well.

Alsobrooks, 47, earned a bachelor’s degree in public policy from Duke University in 1993, followed by a J.D. from the University of Maryland law school in 1996. She served as the county’s assistant state’s attorney for from 1997 to 2002. Originally from Camp Springs, Maryland, she now resides in Upper Marlboro.

Alsobrooks’ campaign website credits her for increasing the State’s Attorney’s office budget by 40 percent through a parking enforcement initiative, as well as launching the “Back on Track Prince George’s County” program, which is aimed at preventing recidivism among non-violent drug offenders.

In May 2017, 2nd Lt. Richard Collins, a black student from Bowie State University, was stabbed while waiting for an Uber on this university’s campus. Urbanski, a student at this university at the time, was arrested and charged with murder in the killing.

After prosecutors spent several months analyzing evidence, Alsobrooks announced in October 2017 that they would charge Urbanski with a hate crime as well. Urbanski was a member of a racist Facebook group, and Alsobrooks said at a press conference that her office believed Collins’ slaying “was as a result of his race.”

Dodd, who played center for Maryland men’s basketball from 2013 to 2017, was charged with second-degree rape earlier this year. Alsobrooks said in a release that Dodd met a woman at a Halloween party at Terrapin’s Turf, then took her to a College Park apartment and forced her to have sex with him.

Democrat Aisha Braveboy, who represented Maryland’s 25th legislative district in the House of Delegates from 2007 to 2015, will succeed Alsobrooks as the Prince George’s County state’s attorney. Braveboy received 98.7 percent of the vote.

Alsobrooks said Tuesday that Braveboy’s administration will make independent decisions about the cases going forward, and she expects proceedings to be “firm and fair and transparent.”

Alsobrooks’ tenure will continue the long line of Democratic executives for the county. Voting records from September indicated there were 457,480 registered Democrats and 40,484 registered Republicans in Prince George’s County.

Prince George’s County last elected a Republican County Executive in 1978, according to The Washington Post. Alsobrooks defeated eight other Democratic candidates to secure the party’s nomination in June, while Mathis was the sole Republican in the race.

Alsobrooks spokesperson John Erzen said he hopes to continue building a strong relationship between the county and this university, focusing on tech and business startups, educational initiatives and keeping alumni of this university in Prince George’s County after they graduate.

As far as the county’s public schools — a key issue for the Alsobrooks campaign — Erzen said the new administration will “focus back on students, teachers and parents” rather than the school board, and “ensure the highest learning standards possible.”

In July, Kevin Maxwell resigned as the chief of Prince George’s County schools, three years before his contract was set to expire. Several scandals marked Maxwell’s tenure, including accusations that the county’s increasing graduation rates were based on improperly inflated grades.

Maxwell sparred with several members of the school board and drew the ire of the teachers’ union, which took a vote of “no confidence” in the county schools’ leadership.

Alsobrooks — who had called for Baker to fire Maxwell in April — echoed Erzen’s stance, saying she’s “so sick of the conversation about the [school] board structure and who has the power.”

She said her administration would increase investment in pre-K education, career and technology education and infrastructure improvement projects within the county’s schools. Alsobrooks said this university’s education school is a valuable partner in recruiting new teachers.