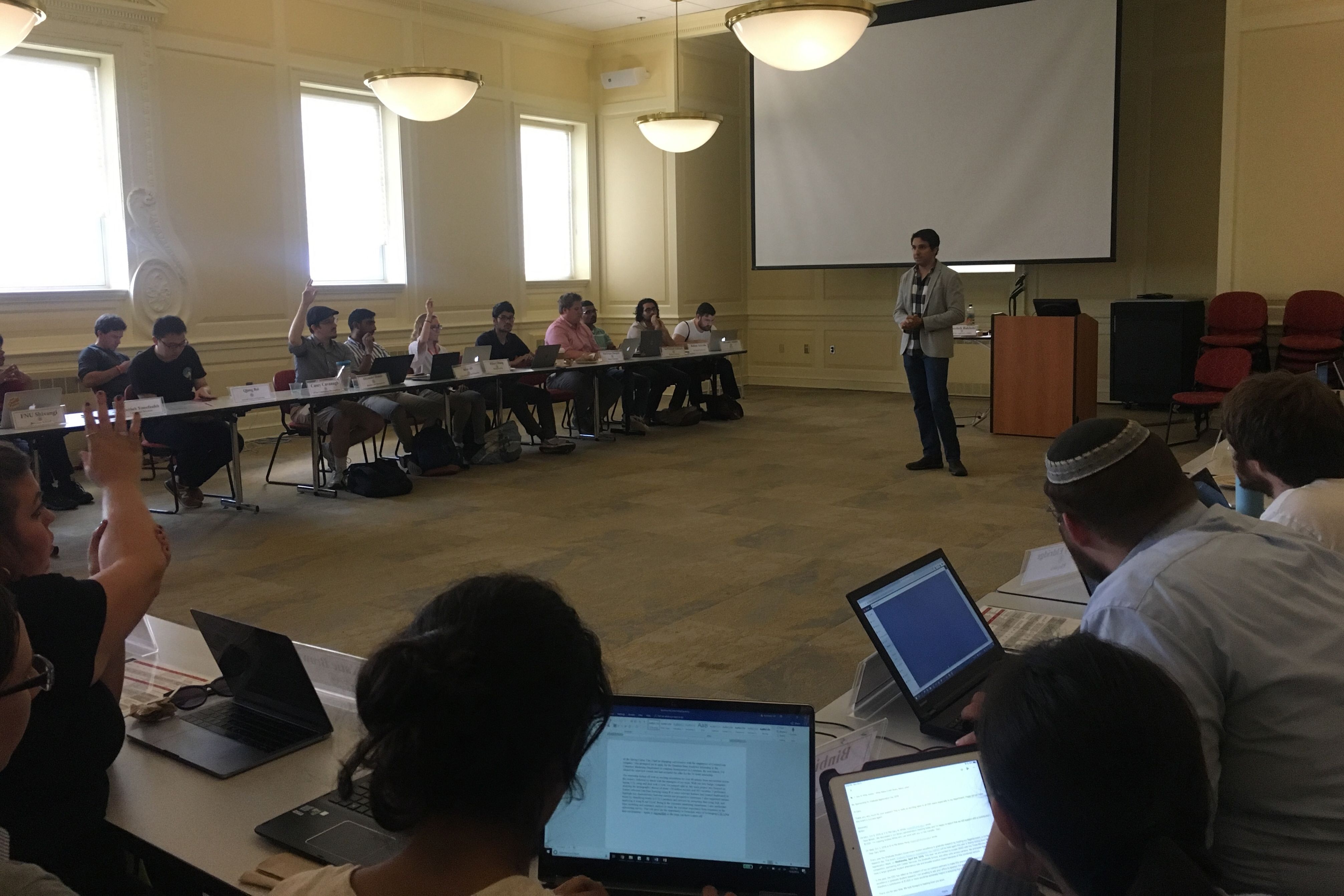 The Graduate Student Government holds a meeting in the McKeldin Library special events room on Oct. 8, 2018. (Angela Roberts/For The Diamondback)

A week after the University of Maryland fired head football coach DJ Durkin, the GSG has called for him to donate part of his multi-million-dollar contract buyout back to the school to protect student-athletes.

Durkin was fired without cause, meaning he didn’t explicitly violate the terms of his contract. Because of that, the university owes him more than $5 million.

GSG president Annie Rappeport said the resolution could pressure Durkin into dedicating at least part of the money awarded to him for this purpose.

“Once we put this idea into anyone’s head, or if this gets any publicity, then he actually has to reject this idea,” she said. “It’s actually making it an option, so then he would have to say, ‘I’m not giving any money to memorialize Jordan McNair.’”

The resolution recommended that Durkin work with the university to donate the money to the Office of Civil Rights and Sexual Misconduct, which administers policies prohibiting discrimination and harassment.

An independent commission’s report looking into this university’s football program detailed several instances of abuse, including then-strength and conditioning coach Rick Court throwing food, weights and on one occasion a vomit-filled trash can at players.

The commission determined that Durkin, university President Wallace Loh and athletic director Damon Evans were all partially responsible for the mismanagement and lack of oversight that allowed such abuse to occur.

Alexander Dennis, a business school representative, proposed a successful amendment to the resolution: Future athletic staff member contracts should make it clear that if their actions cause student-athletes to be harmed, it should count as cause for their firing.

“I was shocked at the fact that this did not count as just cause for [Durkin’s] firing,” he said.

The GSG also approved, 25-4 with two abstentions, a separate resolution favoring Loh honoring his promise to retire. And an opposing resolution, calling for his immediate dismissal, failed 6-12 with 11 abstaining.

Since he announced his plans to retire in June, Loh has faced calls from numerous politicians and leaders to reconsider. On Thursday, this university’s provost and 15 academic deans voiced their support for him to continue his tenure.

Legislative affairs vice president Roozbeh Bakhshi, who authored the bill calling for Loh to leave immediately, said he’s been consistently disappointed by the president’s actions over the past five years he’s been in the GSG.

Cavanagh said the group should look at the outcomes of passing this resolution “pragmatically.”

If the GSG voted in favor of the resolution and Loh isn’t fired, Cavanagh said, it would harm the body’s relationship with the president. But if they instead called for the him to honor his plans to resign — as they ended up doing — he might be more open to working with them.

“This has been a mess for him and this is, right now, his lasting legacy,” said Cavanagh, an atmospheric and oceanic sciences doctoral student. “He’s not going to want that to be his final stand at the University of Maryland. I’m not saying he’s going to work with us on issues, but he might be more susceptible to because he wants some sort of positive note to go out on.”

The GSG also passed resolutions that called for a student say in the hiring of this university’s presidents and the appointments of the system’s Board of Regents, as well as a resolution calling for graduate students to be able to opt out of the portion of the mandatory athletics student fee that funds student tickets, similar to a motion passed by the Student Government Association last week.

Three-fourths of the $136 fee that all graduate students must pay goes toward the tickets, and the rest funds game day experiences, facility renovations and student salaries.

MacGregor Obergfell, the resolution’s co-sponsor, said graduate students shouldn’t be required to pay a fee that supports a football program that doesn’t reflect their values.

“We are concerned that graduate student voices are not being heard in athletic department decision making, as evidenced by the payouts that are happening within the athletics department right now,” said Obergfell, a representative for the higher education program.