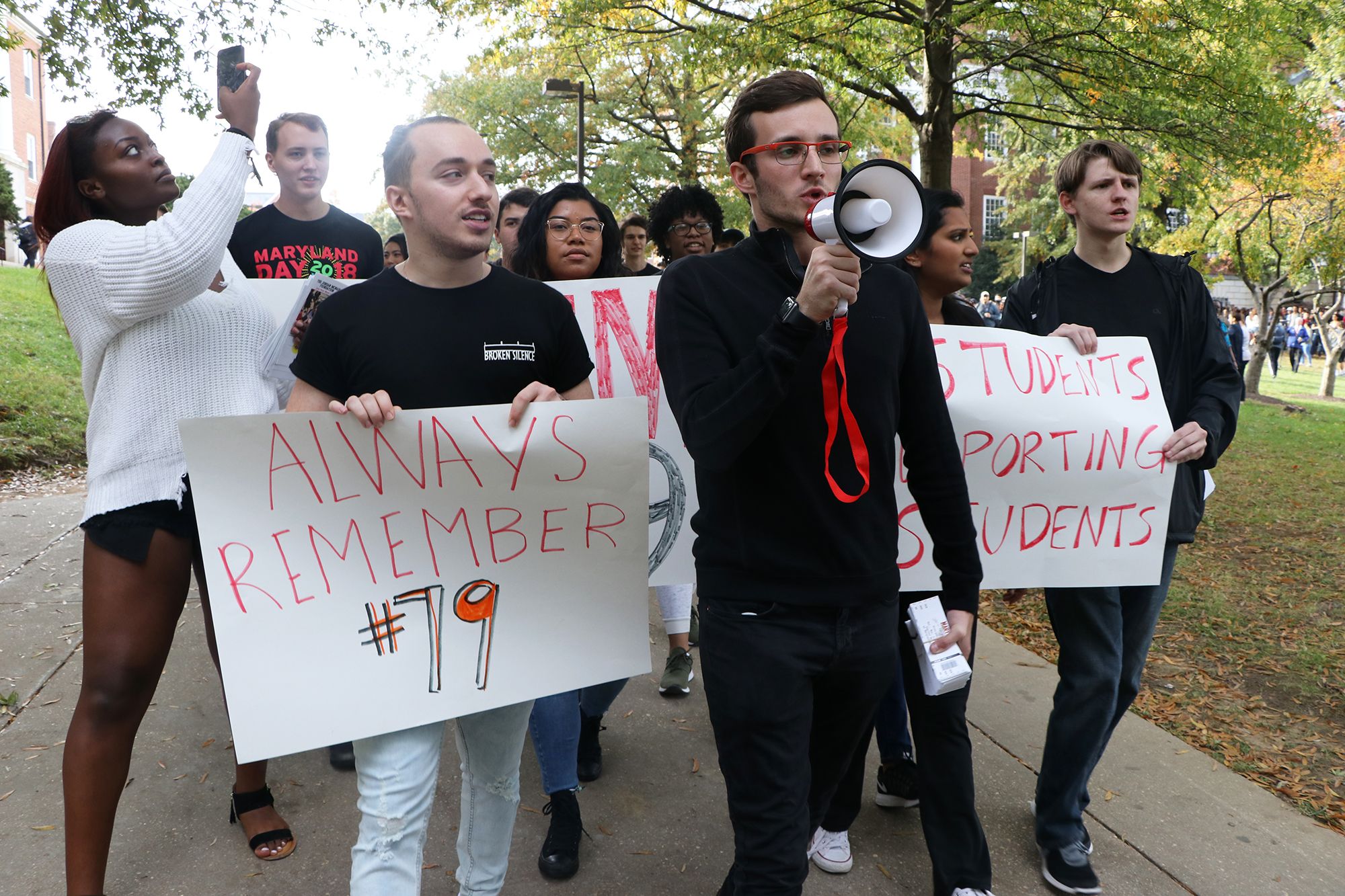 SGA members lead students in a march from McKeldin Library to the Main Administration Building during the Justice for Jordan protest on Nov. 1, 2018. (Julia Nikhinson/The Diamondback)

In the midst of President Wallace Loh’s retirement announcement, the firing of football head coach DJ Durkin and the resignation of Board of Regents chair James Brady, the University of Maryland community received a bizarre email from SGA President Jonathan Allen. Despite the ongoing turmoil overtaking the school, Allen implored students to “pack Maryland Stadium for Saturday’s game.”

The Student Government Association planned a rally on Thursday that was supposed to be calling for Durkin’s removal, but with the Terps’ coach fired the day before, it took on a very different tone. Standing in front of the Main Administration Building, the SGA and other student groups begged their peers to support Maryland athletics and go to football games. College Democrats president Sydney Poretsky urged the students in attendance to go to Saturday’s game. Allen even distributed hundreds of tickets.

The anger this drew from many of those in attendance — including other student groups that have planned another protest calling for actual, desirable change — is emblematic of a common-sense position: Now, more than ever, the last thing students should be doing is supporting this university’s football program.

For one, this program has such an absurd amount of power that the leadership of the athletics department was nearly kept intact — even after a player died and abuse was widespread.

Loh, despite failing to fix the dysfunction of his athletic department or act on an anonymous tip that football players were being abused, was not immediately removed by the Board of Regents. And Durkin, who was directly in charge of the abusive program, even returned as head coach before the ensuing outrage led to his firing. He shares some responsibility for the program’s culture, yet the university still owes him about $5.1 million in his departure.

This isn’t to mention those who remain in the program whom Allen and others want students to support. An independent commission deemed athletic director Damon Evans partially responsible for the culture of Maryland football and for failing to supervise abusive former strength and conditioning coach Rick Court. Yet Evans remains in charge of the athletic department and presumably will help find Durkin’s replacement.

Athletic trainers Steve Nordwall and Wes Robinson still have jobs with Maryland football, despite their failure to properly treat McNair for heatstroke, which isn’t fatal when treated properly, according to experts. For more context, Robinson is infamous for allegedly yelling for players to “drag [McNair’s] ass across the field!” during the offensive lineman’s final workout.

If you need more evidence of the inordinate power of the football program, look no further than the likely new chair of the Board of Regents, Barry Gossett Jr., whose family has donated so much money to Maryland football that the football team house bears his name.

The SGA has pushed the idea of attending games by framing it as supporting student-athletes. Both the rally and Allen’s school-wide email emphasized the need to show support for players. This wrongfully equates supporting the victims of abuse and those affected by tragedy with blindly supporting this football program and the sport in general.

To be clear, those who steer clear from football are not doing a disservice to the players; it’s a barbaric, violent sport that has a confirmed link with severe brain damage. While the university stands to benefit financially from the popularity of its football team, the players — almost all of whom will miss out on the NFL — do not.

Perhaps the most alarming part of Allen’s email is at the bottom, where it states that the message was approved by the office of the Vice President of Student Affairs. It’s disconcerting that the SGA would align itself with an administration that has handled this scandal so poorly, and that has an active interest in promoting its athletic programs regardless of the circumstances.

In the wake of this scandal, students shouldn’t further fuel the power of the football program by patronizing its games when little has been done to change its leadership or its culture. The SGA’s recent resolution to make some of the student fees for athletics optional is commendable and would be a step in the right direction, but its rhetoric about supporting Maryland football badly misses the mark.