UMD Senate: Board of Regents “grossly exceeded its authority” by pushing for DJ Durkin to stay 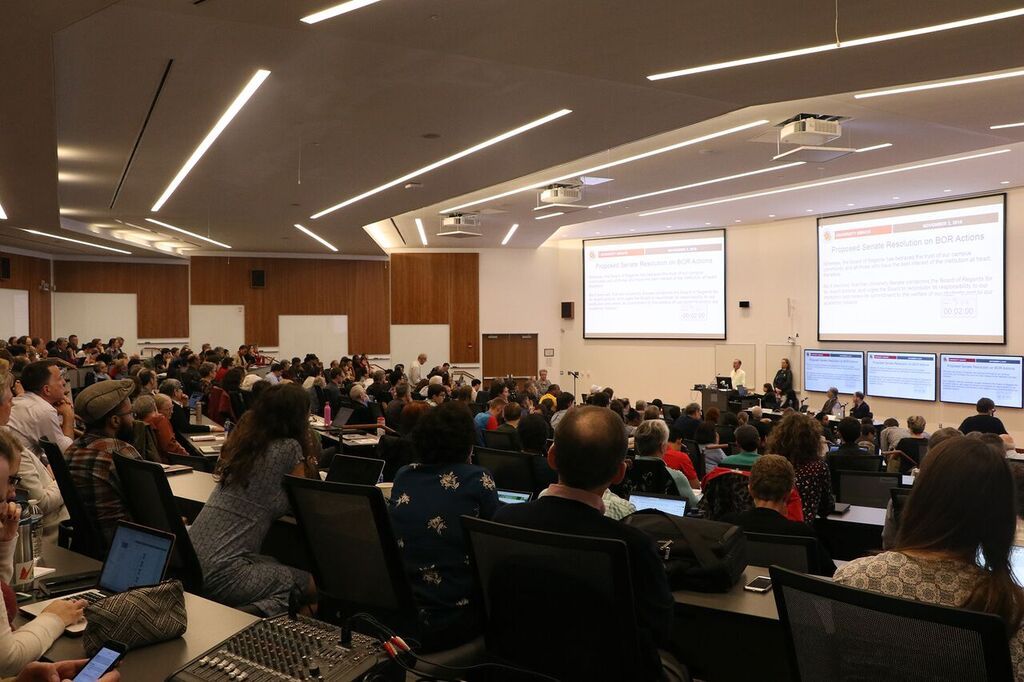 The University of Maryland Senate prepares to vote on a resolution during its emergency meeting in the Edward St. John Learning and Teaching Center on Nov. 2, 2018. (Julia Nikhinson/The Diamondback)

At its emergency session Friday, the University of Maryland Senate officially condemned the Board of Regents for “grossly exceed[ing] its authority” with its recommendations following the investigation into this university’s football program.

This came one day after the board publicly released the investigation’s report, which found that Durkin, Evans and Loh shared the blame for the abuse in the football program, as well as the chaos and lack of accountability in the athletic department.

The regents made it clear that if Loh didn’t retain Durkin, they’d find someone who would, The Washington Post reported. While Loh ultimately fired Durkin, the senate still took issue with the board’s “overreach and violation of basic principles of higher education,” according to the resolution.

“[T]he Board of Regents grossly exceeded its authority and interfered with the autonomy of our institution, undermining the University’s core values and impacting its ability to fulfill its mission,” the senate’s resolution read.

The resolution passed 86-7, with three abstentions.

“I like that there’s this speaking back to the Board of Regents, and I really want to see that followed through on,” said Smith, an English professor.

The Board of Regents — which sets policy for the University System of Maryland’s 12 member institutions — has the ability to hire and fire university presidents, but not to make university-level personnel decisions. On Wednesday, Loh announced in a campuswide email that he fired Durkin.

Provost Mary Ann Rankin expressed sentiments similar to those of the senate in a campuswide email sent earlier this week. The email pleaded for Loh to rescind his retirement and said that the signees, which included the deans of each academic college, had been “extremely alarmed for weeks” at the board’s interference in university governance.

“It is the President who is responsible for personnel matters at the University, and it is within the President’s discretion and authority to decide whether to retain athletics staff,” Rankin wrote.

Smith emphasized the distinction between the university’s role and the Board of Regents’ role.

“Wallace Loh is right — athletics is the front porch of this university,” she said. “But the porch has nothing to cling to, no reason to be, without the house that supports it.”

The senate also released its previously private recommendations on the aforementioned report, as well as a separate report on offensive lineman Jordan McNair’s death from heatstroke.

The senate’s executive committee sent the recommendations to Loh on Monday. Lanford, who oversaw their review, would not provide specifics on what they were at the time.

“The subcommittee did not feel it was appropriate to second-guess Dr. Walters’ findings and recommendations,” she said.

The committee’s recommendations included requiring a biannual outside review of athletics’ emergency action plan and placing athletic trainers under the authority of outside physicians rather than university staff to make them “completely independent of any real or perceived threats to their positions,” Lanford said.

“The problems we’ve seen here in athletics are woven into high-level collegiate athletics,” he said. “It comes down to the priorities of the people who you hire, not the oversight.”

The committee also requests the athletic department share its feedback from the portals with the university’s student affairs vice president to ensure transparency and make sure issues are solved externally.