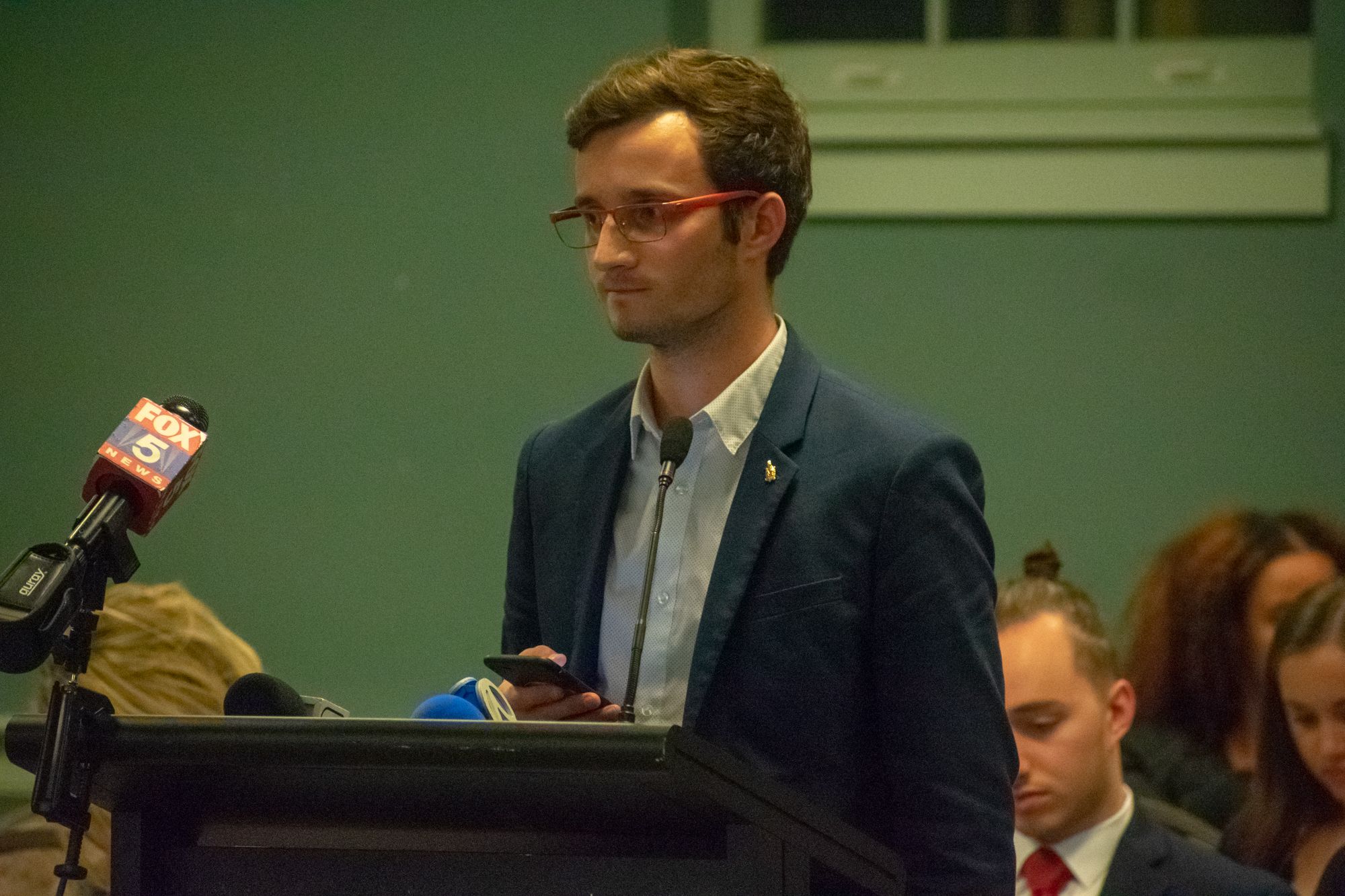 Jonathan Allen, the SGA president, stands at the podium at an SGA meeting on Oct. 31, 2018. (Elliot Scarangello/The Diamondback)

When the University of Maryland SGA’s meeting started at 6 p.m. on Wednesday, the Stamp Student Union’s Charles Carroll Room was already bustling with video cameras and news reporters.

Less than one hour into the meeting, Student Government Association representatives were in the middle of impassioned discussion of legislation calling for football coach DJ Durkin’s firing — and then, university President Wallace Loh released a letter saying that’s exactly what happened.

The room of more than 50 people erupted in applause, contrasting with the legislature’s normal snaps of approval.

After two five-minute recesses, Noah Eckman, the SGA’s speaker, rescinded the original resolution calling for Durkin to be fired, and proposed a new resolution supporting the decision to fire him.

The motion passed 34-0, with one abstention.

“[Durkin’s firing] is what I’ve been pushing for over the past 24 hours,” said SGA President Jonathan Allen. “It says a lot about about student advocacy and the role of SGA on this campus.”

Loh’s decision to fire Durkin came after a day filled with politicians, including Maryland Gov. Larry Hogan, asking the Board of Regents to reconsider its Tuesday recommendations that Durkin and athletic director Damon Evans should keep their jobs.

The resolution supporting Durkin’s firing also called for at least one undergraduate student and one student-athlete to be included in the search for his replacement.

In addition, the body passed two other pieces of emergency legislation related to the athletic program — the first to eliminate a portion of the mandatory student athletic fee.

“Students shouldn’t be forced into paying for a department that doesn’t represent the values of the student body,” said Eckman, a junior chemical engineering major.

The resolution calls for the 75 percent of the mandatory student fee that goes toward covering the cost of student tickets to be changed to an opt-in program — so that only students who want to go to games have to pay for them.

The other 25 percent of that $406 fee covers facility renovations, game-day experiences, and student salaries, which would not change, the resolution said.

“Student fees should align with the values of students,” Allen said. “If anything, I think this should increase student attendance [at games].”

Brad Weissel, the SGA’s athletics liaison, said allowing students to choose if they purchase tickets will increase accountability in the athletics program, since those funds wouldn’t be automatically allotted — they’d have to earn them.

“[This way] students have more of a voice in where their money goes and who it supports,” said Weissel, a junior government and politics major.

The body also passed a resolution to host a “Justice for Jordan” rally Thursday. Originally planned to bring students together to call for Durkin’s firing, the rally will now be in support of football players and Jordan McNair’s family, Allen said.

Organizers plan to meet at McKeldin Library at 3:30 p.m. before marching to the administration building, according to the event’s Facebook page.

This resolution — and the resolution concerning the opt-in program on athletic fees — passed 34-0, with one abstention.

“I do think it’s important to continue on with the rally,” Allen said. “The purpose is to rally behind our student-athletes and express support for them and the team leading up to Saturday’s game.”

David Stein, a senior nutrition and food science major and SGA agriculture representative, spoke in favor of holding the rally, regardless of Durkin’s removal.

“There’s nothing more helpful than community experience — with people, with feet, with hearts, with bodies — standing together, showing support,” Stein said.