UMD President Wallace Loh is retiring. Here’s a look at his eight-year tenure. 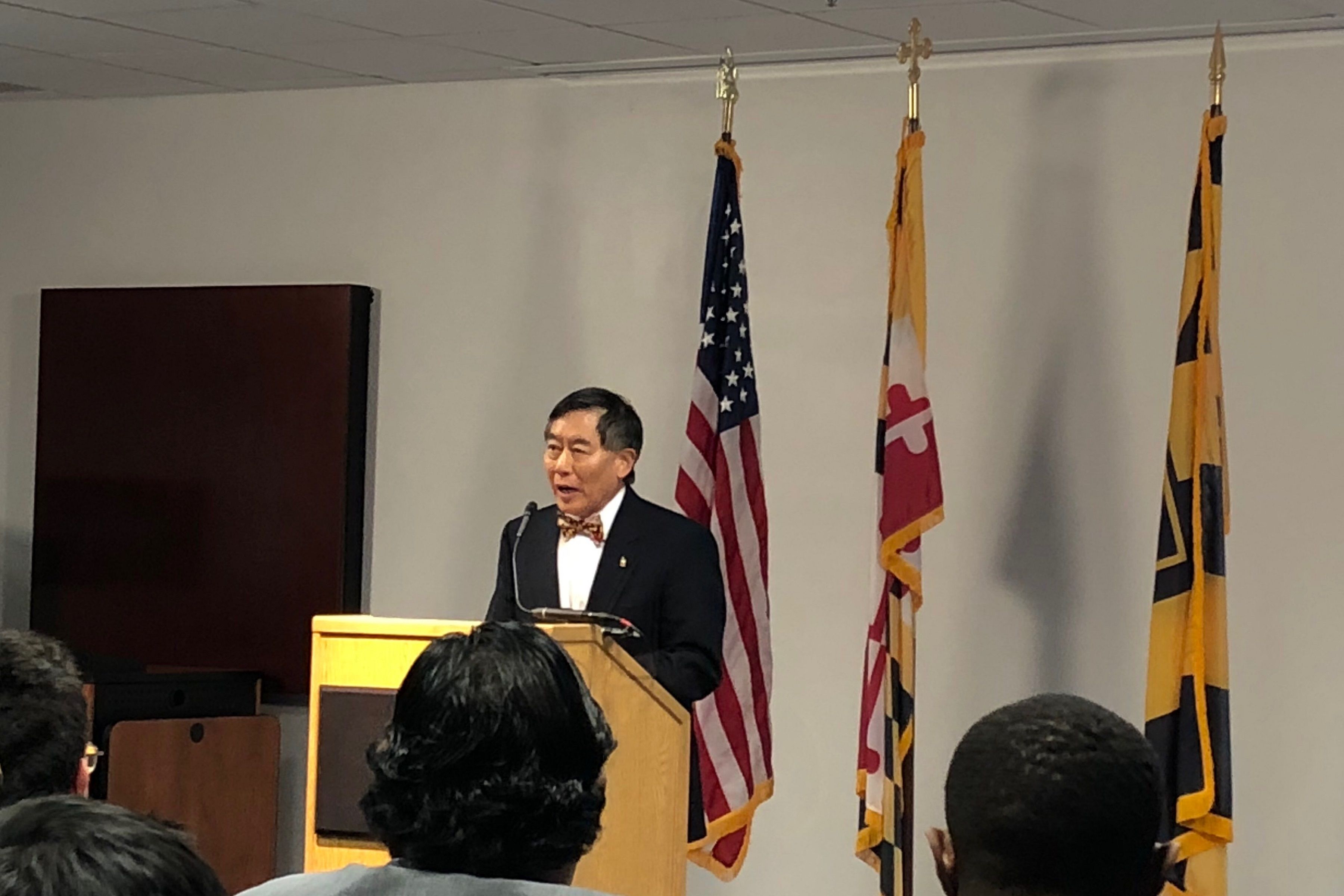 University of Maryland President Wallace Loh announces he will retire in June 2019 at a press conference in Baltimore on Oct. 30, 2018. (Andy Kostka/For The Diamondback)

On Tuesday, Wallace Loh repeated an analogy he’s been known to say throughout his tenure as University of Maryland president: He steers the ship — the flagship, that is — through stormy waters.

The flagship, Loh noted, is a sizable one — with almost 40,000 students, 10,000 faculty and staff and 520 student-athletes — and the captain’s job is to navigate that ship out of turbulence to smooth seas.

But now, the Loh ship has sailed. In a Board of Regents press conference, he announced he will retire in June after the end of the academic year.

“It is an abdication of responsibility of a captain to abandon ship in the middle of a storm. And I don’t know how many new captains want to join the ship when the ship is in the middle of the storm,” he said. “The regents have asked me to do exactly that: to steer the ship to calmer waters.”

The university’s eight-year president reiterated the findings of an independent commission looking into the school’s football culture: The administration was partially responsible for an athletic department that enabled players to be abused with a lack of oversight.

“I have accepted that responsibility,” Loh said.

The board recommended that athletic director Damon Evans and football coach DJ Durkin keep their jobs — and though Loh continually voiced his support for Evans, he remained close-lipped on Durkin. The Washington Post reported Friday that Loh favored Durkin leaving the university.

The decisions come after the release of two distinct reports: one on the culture of the university’s football program, which media reports had described as “toxic,” and the other on the death of football player Jordan McNair, who suffered heatstroke at a team workout and wasn’t properly treated. In August, Loh said the university accepted “legal and moral responsibility” for his death.

The Baltimore Sun reported that the regents made it clear to Loh that he could put Durkin back in his role, or they’d replace him.

When asked if it came down to Durkin or him, Loh’s full response was: “I have accepted the recommendations in full of the Board of Regents.”

Earlier in the academic year, campus community members called for Loh’s resignation, a move he said was out of concern for student-athletes, and wasn’t about him. Before the McNair report was released, he iterated his experience when asked if his position at the university could change.

Loh became president of the state’s flagship university in November 2010. Last fall, the board approved his $75,000 raise based “primarily on strong performance,” according to a news release. Loh earned a salary of $675,314 last academic year, according to The Diamondback’s 2018 salary guide.

He is perhaps most well-known for his decision to shift the university’s athletics programs from the Atlantic Coast Conference to the Big Ten in 2014. The move was designed to rescue an athletic department that was losing money and had to cut seven sports two years prior.

Loh is also credited with helping this university forging deeper connections with the city of College Park, as well as the University of Maryland, Baltimore. He prides himself on bringing the proposed Purple Line to this university; construction began on the campus this summer.

But in recent years, Loh has drawn fierce criticism from the university community for his response to racism and hate on the campus. After a noose was found hanging in a fraternity house, and white nationalist posters spread across the campus, student groups spoke out in protest, calling for Loh to take action.

In May 2017, 2nd Lt. Richard Collins, a black Bowie State University student, was stabbed to death on the campus while waiting for an Uber. A white former university student, Sean Urbanski, has been charged with murder and a hate crime in the killing.

Afterward, Loh convened a task force to look into campus diversity and inclusion issues, which, a year later, returned a recommendation to explicitly punish students for “intimidating conduct” targeting people based on their protected class.

The administration has also faced blowback after resignations early in the academic year from high-ranking university officials, including Catherine Carroll, the director of the Office of Civil Rights and Sexual Misconduct, and Roger Worthington, the interim chief diversity officer.

Amid the latest turmoil, Loh has eight months left to steer his ship.

“For me, the job of the president is more than a job. It’s a calling to service,” Loh said. “And it’s a calling that I believe is larger than simply having a job.”