“How many more kids have to die?”: UMD students react to Durkin’s return, Loh’s retirement 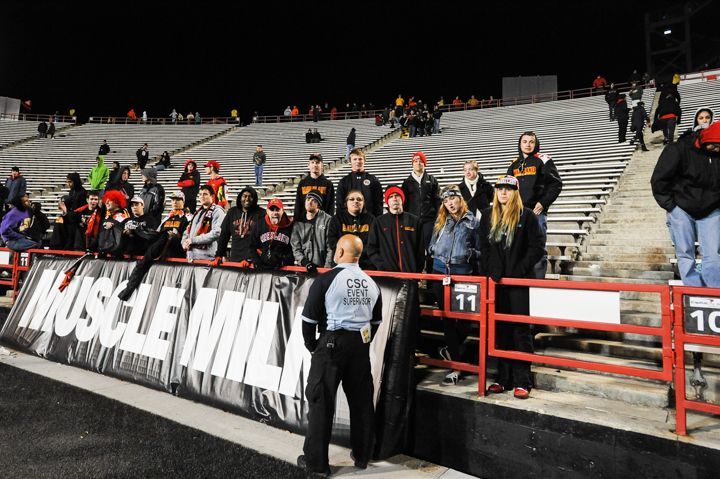 Few students stayed to watch the Terps finish out a 20-3 loss to Syracuse at Byrd Stadium on Nov. 9, 2013. (File photo/The Diamondback)

Loh announced his retirement, which will take place in June, at a University System of Maryland Board of Regents press conference. New developments and dramatic changes to the university — along with upheaval and tragedies across the campus — have defined his eight-year tenure as president.

An eight-person commission, overseen by the regents, released a 369-page report this week that detailed widespread dysfunction and abuse in the football program — due in part to Durkin and Evans’ lack of oversight and accountability — but stopped short of deeming the team’s culture “toxic.”

Sophomore public health science major Justin Azmoodeh said he wasn’t surprised by Loh’s plans to retire, but that hearing Durkin and Evans would stay with the athletic department was “just disappointing.”

“They’re more at fault than President Loh,” Azmoodeh said. “They’re essentially making him a scapegoat, when they’re the ones who should have been fired.”

Senior Peter Barrett said he was happy to see Loh leave. He felt Loh didn’t respond strongly enough to student deaths, including McNair’s and a student’s suicide in August.

“He’s had a lot of negligence in his time as president, and I feel like it’s finally caught up with him,” the senior biochemistry and physiology and neurobiology major said. “So I’m pretty happy to see him go, honestly.”

In August, Loh said the university accepted “legal and moral” responsibility for the death of 19-year-old offensive lineman Jordan McNair, who suffered fatal heatstroke at a May team workout and died two weeks later after training staff failed to properly treat him.

Loh stood by that statement at the press conference Tuesday.

Daniel Cutaneo, a freshman computer science major, called Loh’s retirement “depressing,” and said Durkin and Evans should be ousted instead.

“The entire football team needs to be re-engineered from the ground up,” he said. “It has nothing to do with the president.”

At the conference, Loh expressed confidence in Evans’ ability to lead the athletic department, but shied away from commenting on the reinstatement of Durkin, who had been on administrative leave since August.

The Washington Post reported Tuesday that Loh had told the board he wanted to let Durkin go, but that he faced pushback from the members.

“It was made clear that if [Loh] wanted to remain in his position, he had no option,” an anonymous source told the Post. “The board has no authority to hire and fire a football coach, but they made clear that returning DJ to the field was their highest priority.”

The commission’s report found that Evans helped foster an environment of “chaos” in the athletic department, leaving the football program largely unchecked, and portrayed Durkin as an unprepared coach who failed to supervise his staff or properly address abusive behavior.

Katie Brown, a Graduate Student Government representative, said she was outraged at the decision for Evans and Durkin to stay on.

“What is enough? How many more kids have to die?” the communication doctoral student asked. “How many more things have to go wrong before someone is forced out of a job they’re clearly not fit to do?”

Evans wrote in a statement to the campus community Tuesday evening that “Coach Durkin and I both agree that mistakes were made.”

“I take responsibility for those mistakes and as Athletic Director, commit to you that we will do more,” he wrote.

The SGA’s executive board scheduled a rally for Thursday to protest the decisions and are planning to march on the main administration building, according to a Facebook page for the event.

“We demand justice for Jordan McNair,” the page read.

Student activists have called for Loh’s resignation in the wake of McNair’s death and pointed to other events throughout his tenure that they perceived as his failures to address student concerns.

Loh’s administration was wrought with tragedy and upheaval for students of color on the campus, which was compounded after the fatal 2016 stabbing of 2nd Lt. Richard Collins, a visiting black student from Bowie State University. Sean Urbanski, a white former student of this university, is awaiting trial on murder and hate crime charges in Collins’ death.

Jasmine Washington, the president of this university’s NAACP chapter, said she’s “relieved” to know Loh is on his way out, and is hopeful that the future president will be more communicative on diversity issues.

Brown was among those who wanted to see Loh fired, saying that his decision to retire without speaking out against Evans and Durkin underscored his weak style of leadership.

“He would rather go quietly and be forced into retirement rather than stand up and do something once and for all that’s right for the university,” she said. “I find the whole thing despicable and it breaks my heart — truly breaks my heart — for the football players who have to go back and accept this coach back into their lives.”

Still, some expressed hope for the future.

Residence Hall Association vice president Benjamin Reichard said that “even if the management isn’t changing,” the football culture should.

“I think it’s more important now than ever that, as a campus community, we focus less on the punishment,” the senior government and politics major said, “and more on how to heal from here.”