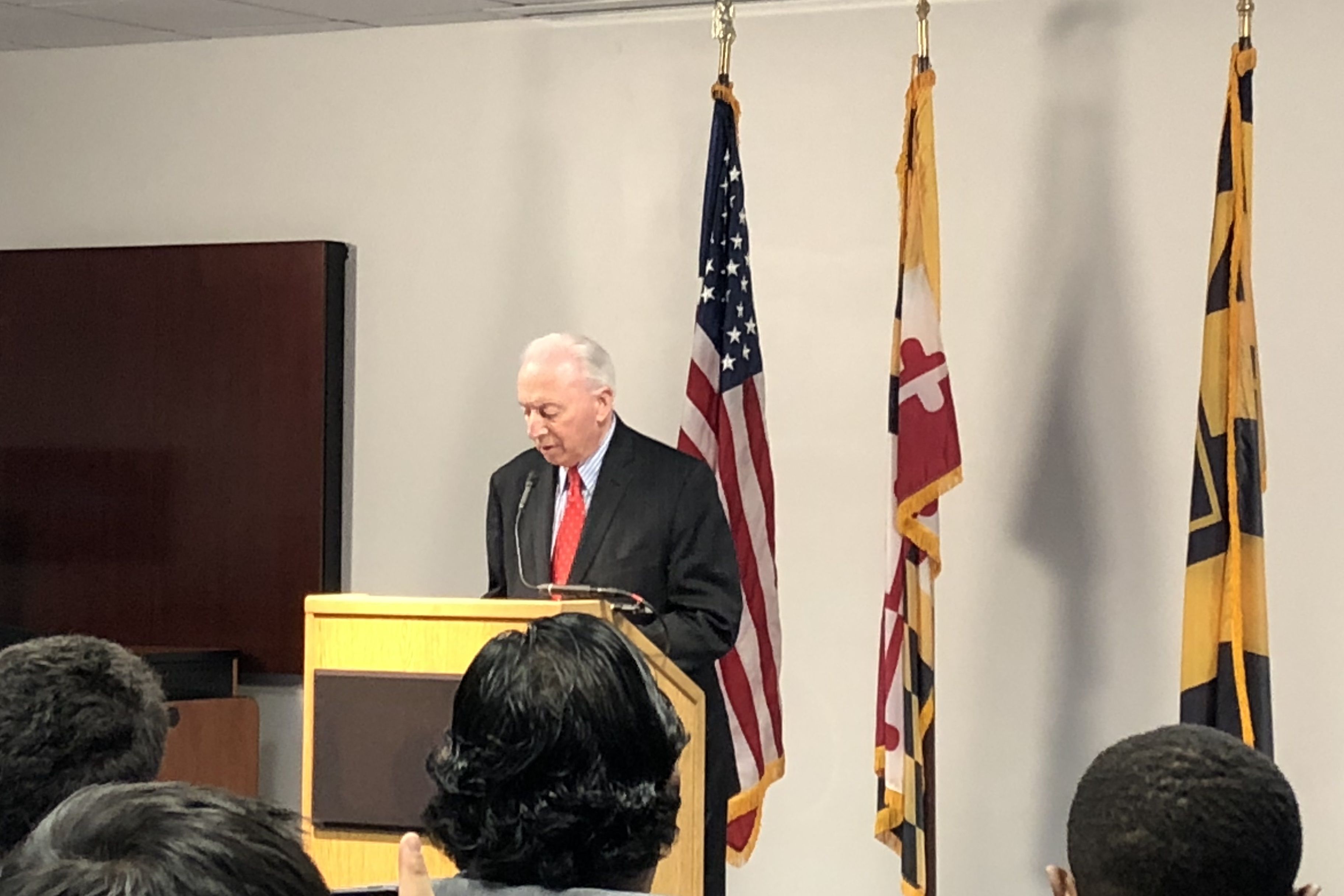 University System of Maryland Board of Regents Chair James Brady speaks at a press conference in Baltimore on Oct. 30, 2018. (Andy Kostka/For The Diamondback)

Several state lawmakers have expressed concerns about the board’s decision, as well as university President Wallace Loh’s announcement that he’ll retire at the end of the academic year.

The hearing — which is scheduled for Nov. 15 — will look into how the decision was made, Del. Maggie McIntosh (D-Baltimore City) told The Washington Post on Wednesday. McIntosh, the House Appropriations Chairwoman, called the meeting.

“They’re basically letting the president go and keeping the coach and the athletic folks,” she told the Post. “What kind of message is that sending?”

The board’s decisions, announced at a press conference Tuesday afternoon, came after the release of two reports on the university’s football team: one into the team’s medical care for Jordan McNair, who died of heatstroke suffered at a team practice, and another into the team’s culture.

The second report, which leaked last week, indicated that dysfunction in the athletics department and university administration contributed to inconsistent supervision of coaching staff, allowing for abusive behavior to continue.

Strength and conditioning coach Rick Court, who resigned in August, was able to mistreat players because of the disarray. The investigation found that he frequently harassed players, hurling homophobic slurs and, at one point, throwing a trash can full of vomit at an athlete.

Loh pushed for Durkin — who hired Court — to be fired, but the Regents forced his hand, the Post reported.

Regents are appointed by the governor, and state lawmakers control funding for the system and the school. McIntosh acknowledged that her committee doesn’t have authority over personnel decisions at the university, but said it can use its financial power to push for transparency.

Democratic gubernatorial candidate Ben Jealous said in a statement Tuesday that Gov. Larry Hogan, the incumbent Republican, should call on the board to fire Evans and Durkin. Hogan appointed 13 of the board’s 17 members, including chairman James Brady.

Meanwhile, other Maryland politicians have sounded off on Tuesday’s announcements. Sen. Ben Cardin (D-Md.) tweeted that he was “extremely disappointed” and “very troubled” about the decision to keep Durkin.

“Everything we’ve learned over the past several months suggests there should have been a different outcome,” he wrote.

Fellow Maryland senator Chris Van Hollen, also a Democrat, said in a statement he doesn’t “fully understand the rationale behind [the board’s] decision” and would be looking for “a more complete explanation.”

State Comptroller Peter Franchot called the decision to keep Durkin “an embarrassment to the people of Maryland.”

“By putting this man back in a position of authority over young student-athletes, the Board of Regents has sent a very clear message that the safety and well-being of kids doesn’t matter. Character doesn’t count, and the reputation of our state’s flagship institution is irrelevant,” Franchot wrote on Facebook.

Franchot said that as long as Durkin and Evans are employed at the university, he will not visit the campus.

“At day’s end, for all of the pious rhetoric about the memory of a young man who died due to the gross negligence of others, it all comes down to the money,” he wrote on Facebook.

“DJ Durkin & Damon Evans should be fired. Board Chairman Brady should resign for the extreme callousness & ineptitude he demonstrated by putting his own personal agenda ahead of the welfare of our students,” Brown tweeted.

Brown said the reinstatement of Durkin was “appalling and unconscionable.”

“Jordan McNair’s life matters,” he tweeted. “I urge the entire UMD community to come together and reject this litany of excuses and demand accountability.”